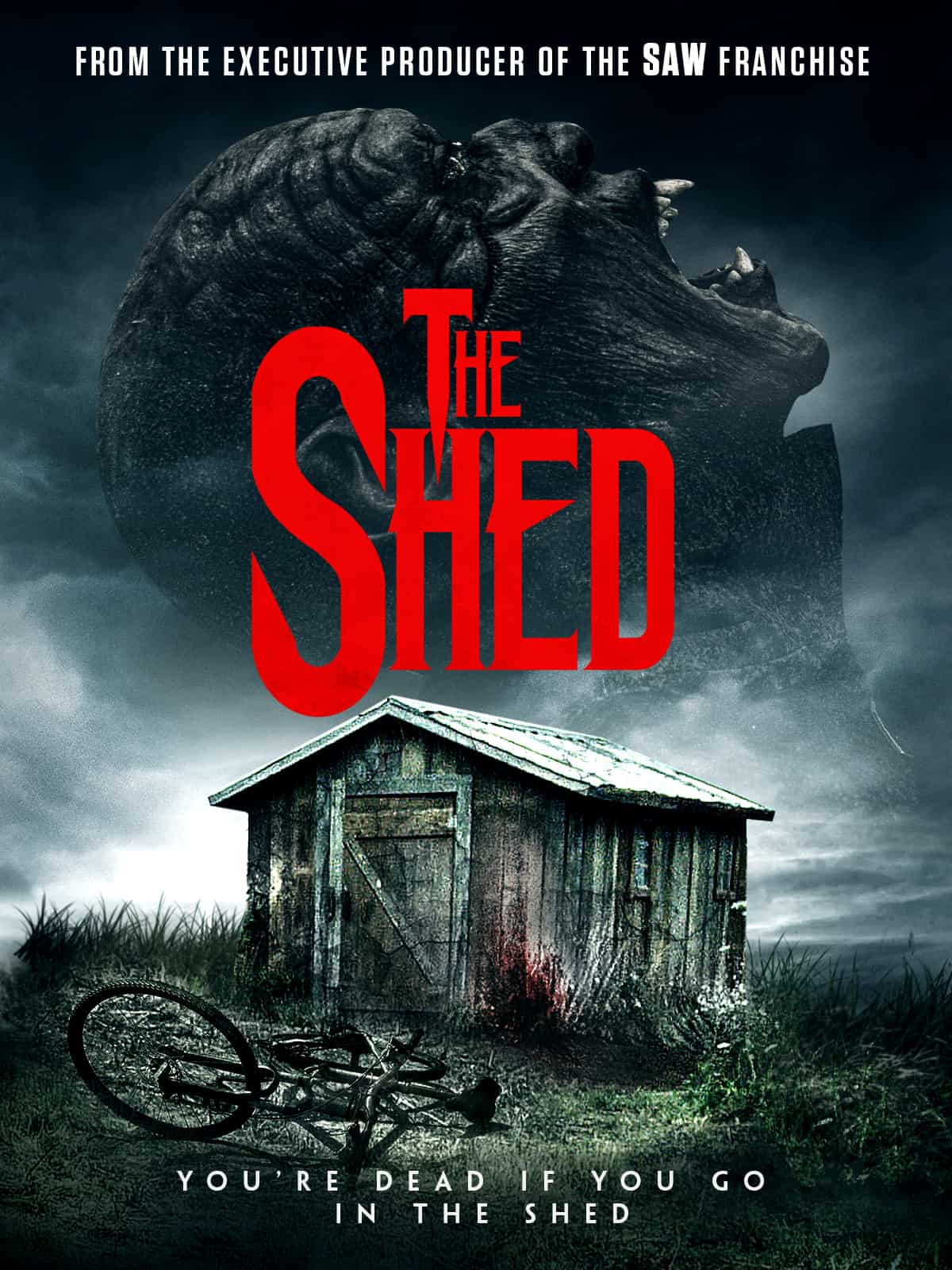 Frank Sabatella has managed to shape a quirky twist on the vampire genre with The Shed. It was initially released in November 2019 and was filmed in Syracuse and Manlius, New York. It’s produced by A Bigger Boat Productions who also created: Jigsaw, House at the End of the Street, The Ward and Saw IV. Frank’s other films include Blood Night: The Legend of Mary Hatchet (2009) and Children of the Witch (2013).

Yes, this a vampire film, but it’s about a lot more. It explores bullying, relationships, loss and abuse on multiple levels. Stan (Jay Jay Warren) and his best friend Dommer (Cody Kostro) have reached breaking point. After years of being bullied, they are about to snap and the consequences are truly horrifying. Something is living in Stan’s shed, it wants to play and may just be the solution to Stan and Dommer’s problems. The story of The Shed begins as a bedraggled Bane (Frank Whaley) flees in blind terror from an ancient vampire. The vampire is destroyed and turned to dust by the suns rays. Though not before it has bitten the terrified victim, turning him into one of the unholy dead. The newly created blood sucker, is not lucky enough to have a spooky castle for a hideout. Instead this contemporary vamp has to lie low in Stan’s shed. 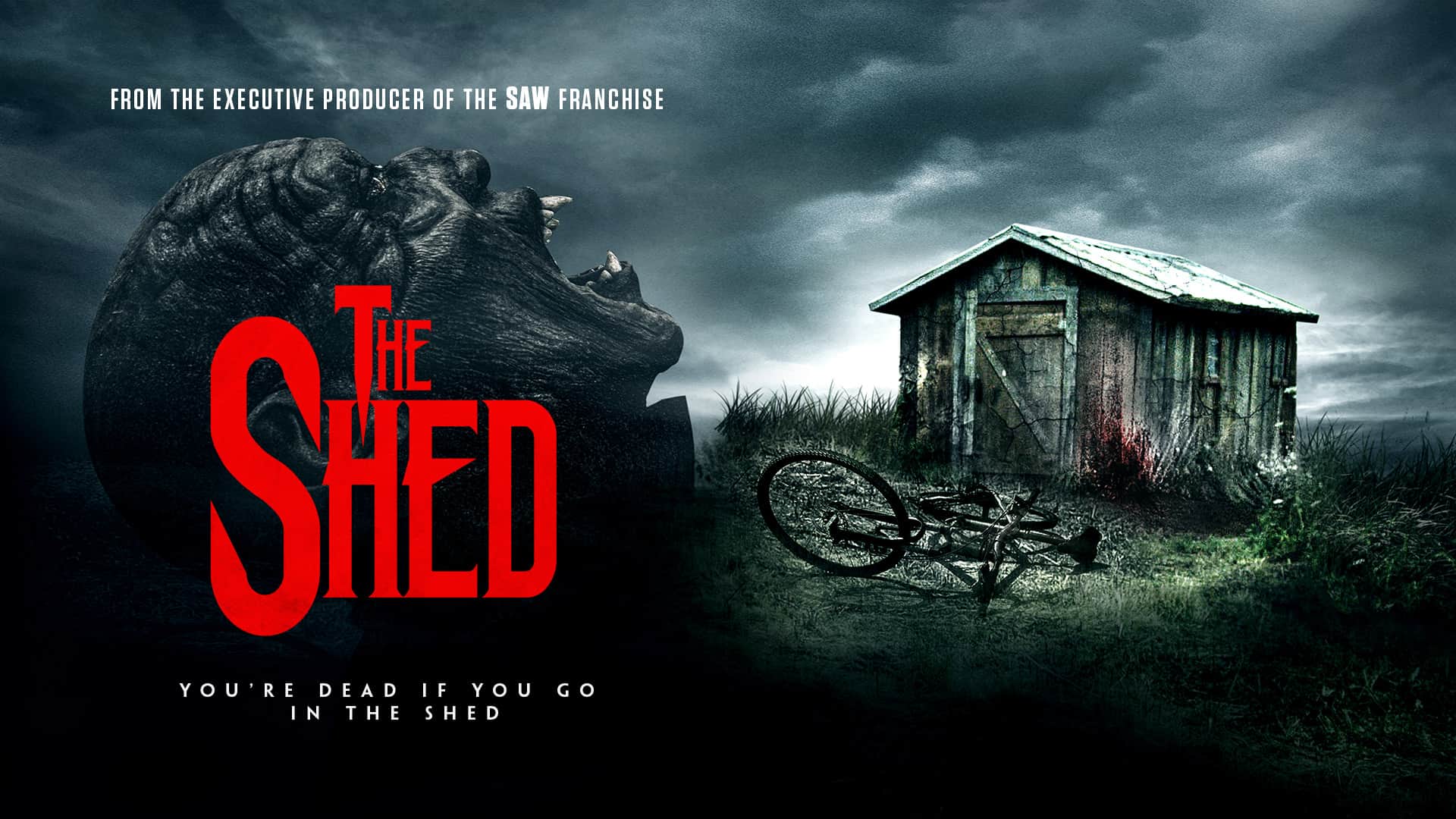 Stan is oblivious to the horror hiding in his outhouse and dreams of a perfect morning with a perfect family. His dream morphs into a nightmare in which his mum dies and dad blows his own brains out. Stan wakes from his night terrors in a cold sweat, as angry alcoholic grandpa Ellis (Timothy Bottoms), bangs on the door to his room. The nasty grandpa bellows “While you’re under this roof, you live by my rules”. After an abusive morning, Stan escapes his dis-functional home life and cycles to school, leaving raging granddad behind. 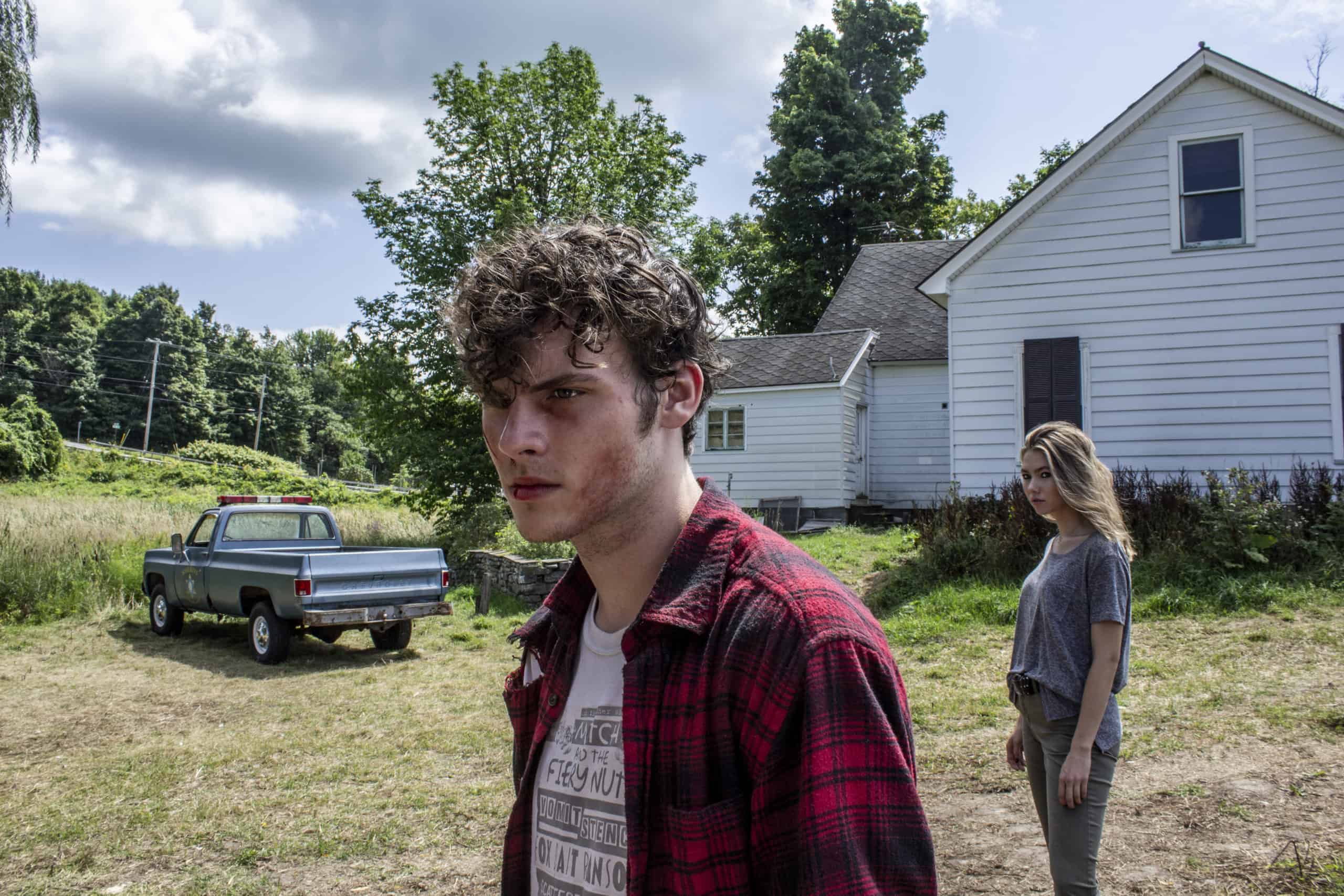 The local bullies, lead by Marble (Chris Petrovski), drive Stan off the road and cause him to crash into the police Sheriff Dorney’s (Siobhan Fallon Hogan) car. It’s turning into a real bad day, and it’s going to get a whole lot worse. Deputy Haiser (Mu-Shaka Benson) is not pleased with Stan, warning him “I’ll be right up your ass”, much to Stan’s amusement. Stan arrives at school and sees the beautiful Roxy (Sofia Happonen), but she’s too cool for down-trodden Stan. As he opens his locker, the bullies turn their attention towards his best friend Dommer. As the bullies attempt to make Dommer’s life even more miserable, a fight nearly breaks out. Escalation is stopped in the nick of time by Mr. Deere (Drew Moore). However this momentary rest-bite won’t stop the bullies relentless onslaught, they haven’t finished with Stan and Dommer yet. 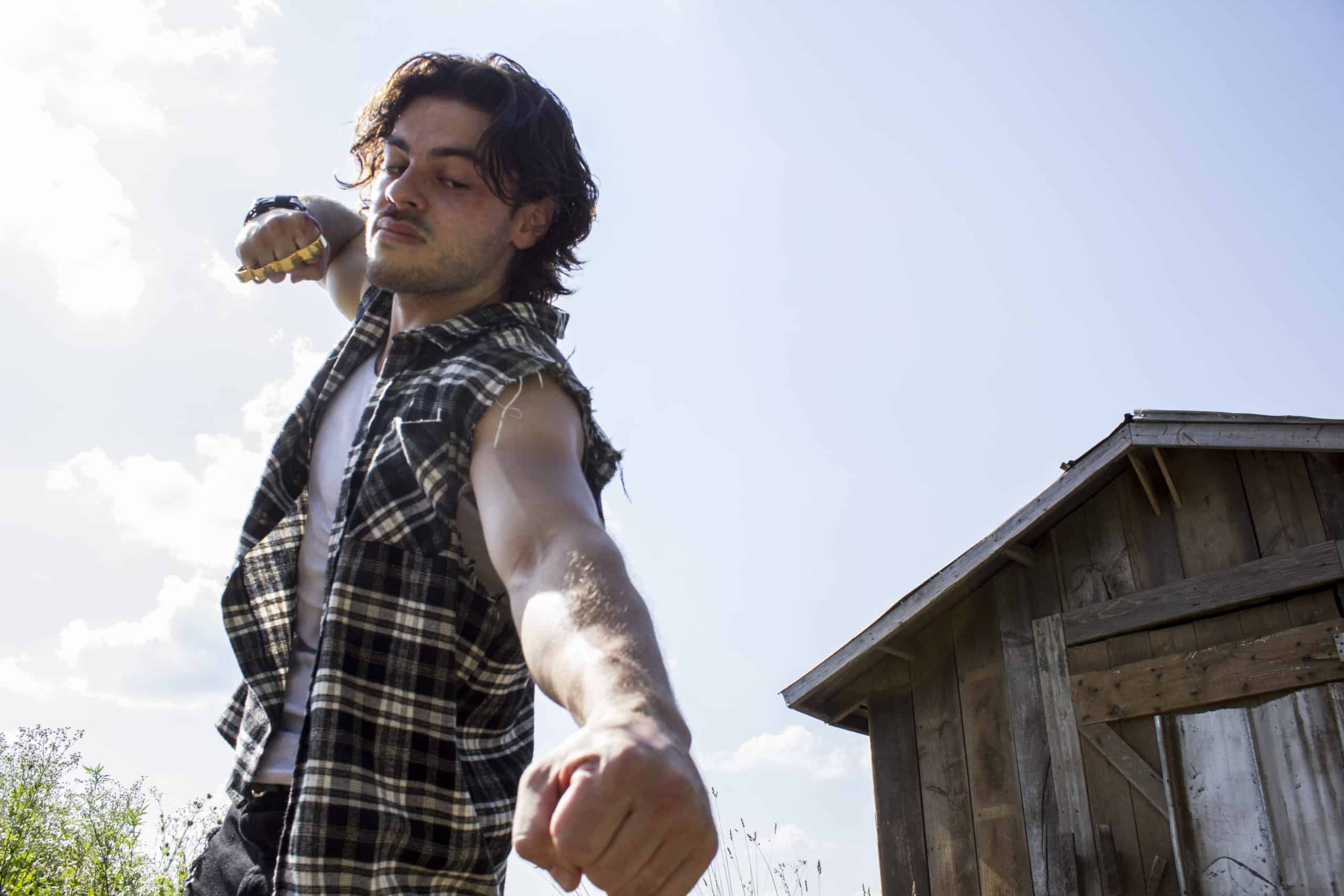 Stan heads back home and angry grandpa starts ranting again, sending Stan out to mow the lawn. Guess where the lawnmower is kept…well it’s in the shed. Stan enters the shed of death and finds some teeth on the workbench. He is pounced on by a shadowy creature from the gloom. So he lets loose his dog on what he thinks is a crack-head. Moments later the dogs head launches through the shed door. Bonkers grandpa doesn’t believe Stan’s crazy story and heads to the shed to investigate. Puddled granddad enters the shack to sort out the druggie, but moments later he is screaming to get back out, caked in blood. Half baked grandfather is dragged back, wailing into the potting shed of pain, as icky blood pools out from under the door. 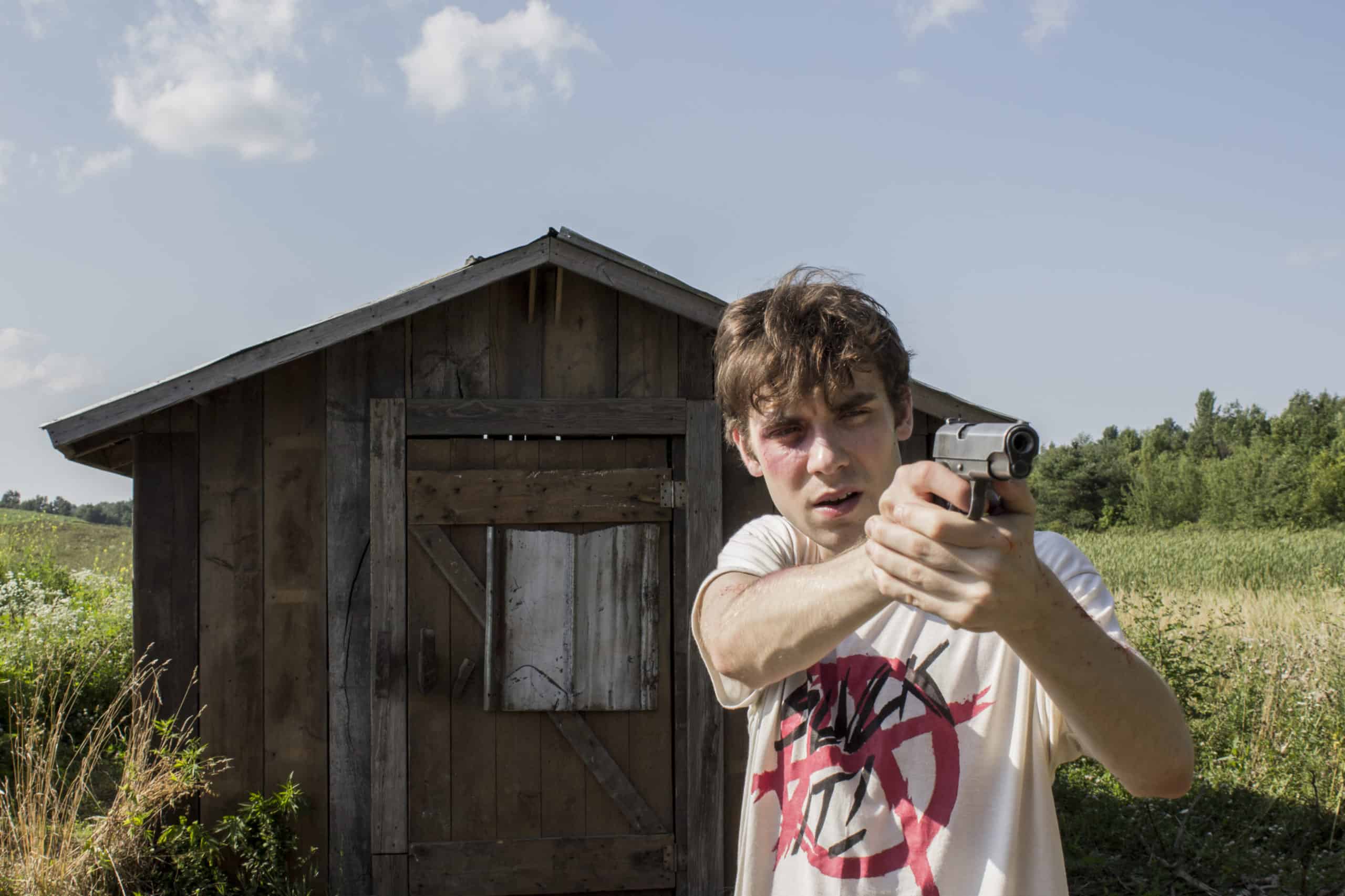 Stan secures the shed with a chain and nails, surely the vampire will be able to escape in the night. Consequently, Stan has a fit-full night, tormented with nightmares. He survives the night and next day at school Roxy talks to Stan and he tries to tell her what has happened. He is disturbed by Dommer before he can tell her what is going on in the hut of horror. Meanwhile, Marble and his goons beat up Dommer one last time, when Dommer finds out what’s in the shed; it’s time for his revenge. 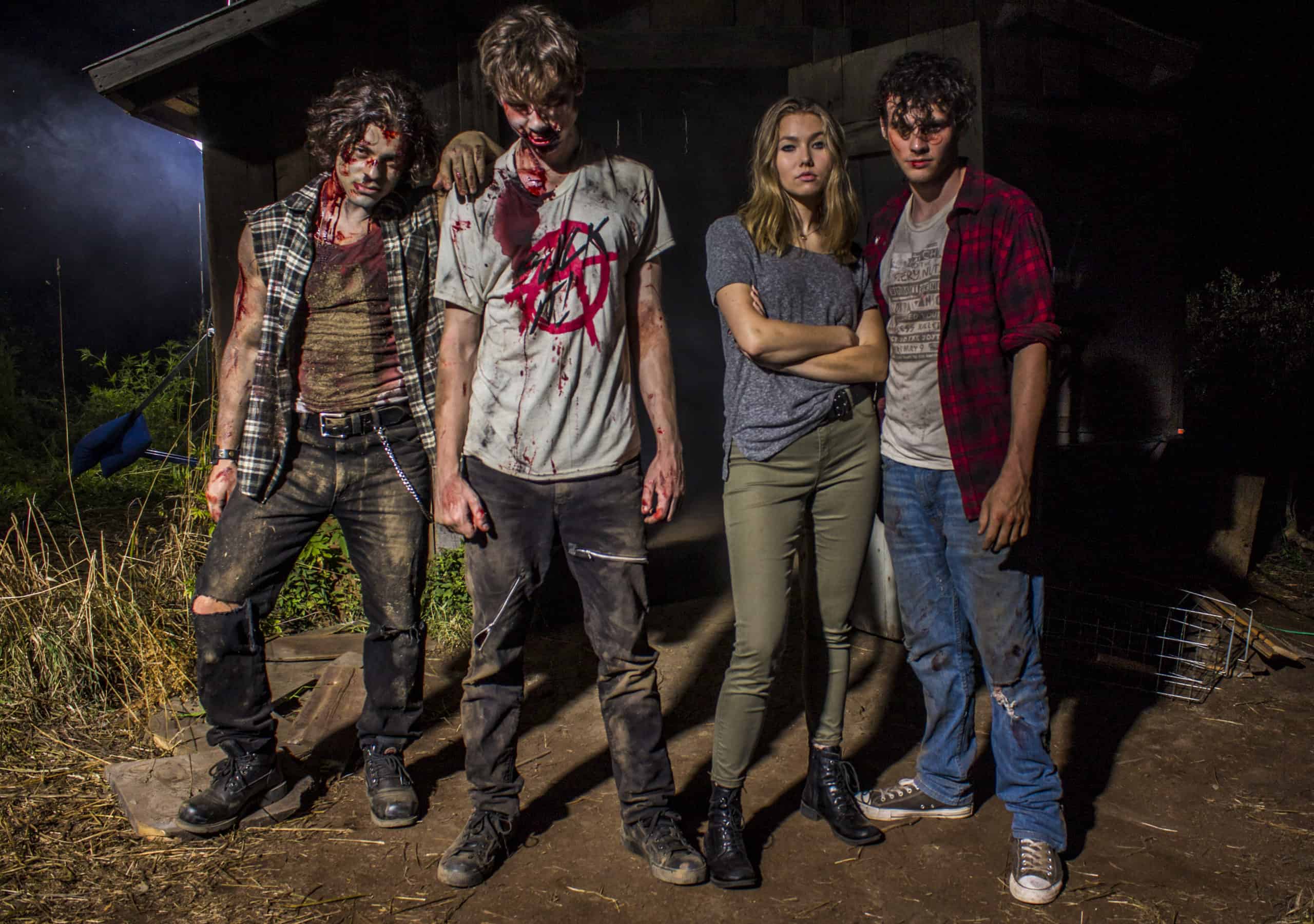 The Shed opens with some cheesy overacting, making me wonder if I’ve made a horrible mistake in picking this one for review. Thank goodness it’s only a dream and the acting is actually pretty decent, Stan is perfect as the lead guy. The Shed is enjoyable with a healthy serving of blood and a strong moral message.

The Shed does hold some incongruities, including Bane’s apparent inability to escape from the shed earlier in the film. A shed is not a particularly safe place for a vampire, as they are notoriously rickety with lots of scope for being frazzled by errant rays of sunlight. I can’t imagine Stan’s bit of chain and a couple of nails would keep a vampire prisoner for long. I even worry about Stan, as he is already on the police radar. If people start to go missing, he’s going to be first on the list of suspects, surely?

You’ll certainly find yourself wanting to find out what happens to the bullies and hoping that they get the comeuppance they deserve. The concept of The Shed is pretty off-centre and although the climax has plenty of action and a few twists to keep you entertained. It would have been interesting to have a slightly more unconventional ending, as a vamp film called The Shed deserves. With a great concept, imagery and nice cinematography, I did enjoy The Shed and think a watch wouldn’t be in vein.

The Shed is nicely produced with crisp audio and visuals, as I reviewed the digital download I am unable to comment on any extras.