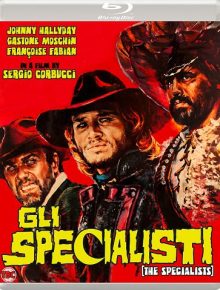 This is a little spoke about gem of a Spaghetti Western from Sergio Carbucci, director of the classic Django. Starring the “French Elvis” Johnny Hallyday, he gives good Clint Eastwood as legendary gunfighter Hud who arrives in the town of Blackstone to clear his dead brother’s name of robbing a bank.  No sooner has he arrived than various townsfolk become interested in Hud, convinced he knows the whereabouts of the hidden bank robbery loot. Those clawing for his attention include a slippery female banker, a group of hippy misfits, a Mexican warlord and various other shifty townsfolk. However, Hud is only interested in getting revenge on them and with the help of an idealistic Sherriff, puts his plot into action.

Made and released towards the tail end of the 60s, The Specialists is a rough and ready slice of Spaghetti Western that while relying on tried and tested tropes throws in a few creative swerves to make it worth discovering. Carbucci made a plethora of Spaghetti Westerns during their boom from the genre defining Django to the likes of The Great Silence, Campaneros and Navajo Joe starring the late Burt Reynolds, meaning he brings considerable skill to the plate.  The film has a down and dirty feel but at the same time looks amazing thanks to some gorgeous widescreen cinematography that beautifully captures the Italian mountain scenery that stands in for the Old West. This gives the flick a distinctive Euro flavour as does the casting of Hallyday and the many other French stars in the main roles. Johnny Hallyday takes a break from crooning to portray a convincing gunfighter who is all ice-cold stare and cool swagger. Likewise Gastone Moschin (The Godfather: Part II, Magnum Cop) is great as the trying-to-avoid-violence Sheriff and Carbucci crams in enough hard edged ballistic action to sate gun-slinging fans (including a great bit where Hallyday, unarmed, jumps from his horse, takes a pistol away from the Sheriff and kills  two bad guys – cool!) .

There’s quite a lot going on in the The Specialists (not just the revenge plot) with various groups of characters and their affiliations with Hud to keep track of, that the action and pace does get bogged down a little. The film is also reminiscent (in style and set-up) of other more highly regarded Westerns (a point the special features perhaps labours a little too much!) but The Specialists nevertheless forges its own path with some unique plot diversions and some almost surreal twists on the customary showdown come the finale: giving it a vibe all of its own. It’s tough and violent, has plenty of gun-slinging action and is simply stunning to look at (in part due to the cinematography, in part due to Eureka’s fantastic 4K restoration) meaning The Specialists is a worthy addition to the genre.

The Specialists will be released on Blu-ray from Eureka Entertainment in the UK on 18 May 2020.

– LIMITED EDITION O-CARD SLIPCASE [First Print Run of 2000 units]
– 1080p presentation on Blu-ray from an incredible 4K restoration
– Restored Italian and French audio options
– Rarely heard English dub track
– Optional English subtitles
– Feature-length audio commentary by filmmaker Alex Cox
– A brand new and exclusive interview with Austin Fisher, author of Radical Frontiers in the – Spaghetti Western: Politics, Violence and Popular Italian Cinema: this is an interesting talking head interview about Spaghetti Westerns, though he perhaps talks a little too much about other well-known films and unfortunately not enough about The Specialists.
– Trailers
– PLUS: A LIMITED EDITION collector’s booklet [First Print Run of 2000 units] featuring new writing by western authority Howard Hughes on both the film, and the “French-western” sub-genre