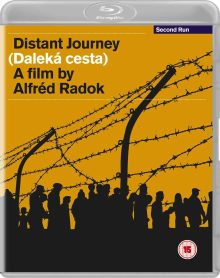 There have been many films made about the Holocaust over the years. So many, in fact, that you could be excused for getting a little desensitized by them. However, imagine being presented with such a film back in 1949, only 4 years after the end of WWII. Alfréd Radok’s Distant Journey (a.k.a. Daleká cesta), which is being released on Blu-ray and DVD by Second Run, was one of the first two fictional film narratives directly about the Holocaust (a few other films had featured concentration camps and addressed the murder of Jews prior to this, but not concerned an entire story with the subject). Wanda Jakubowska had got there first with The Last Stage, but it was still a relatively fresh subject that would have hit disturbingly close to home to millions of people.

Radok’s approach was different from Jakubowska’s though. The latter’s film was presented in a neo-realist style and shot in Auschwitz, with a focus on political prisoners. Radok took a much more expressionistic approach, following a Jewish family and setting his film in the Terezin transport camp (a.k.a. Theresienstadt during the war).

Distant Journey was released in June 1949, but wasn’t allowed a premiere in Prague and was only screened a couple of times before being effectively banned by the Stalinist censorship laws (‘buried’ is how Jonathan Owen describes it). Screenings did happen here and there though and it did enjoy a fairly decent international release, but it’s been largely forgotten over the years. It’s a shame, because watching it now it’s a mightily impressive film.

The story follows Hana (Blanka Waleská), a Jewish eye doctor who, along with her family, is a Jew suffering from prejudice in Czechoslovakia during the war, fuelled by its Nazi occupiers. She has feelings for her colleague, Toník (Otomar Krejča), who is a Gentile, and the pair decide to marry in a rush, so that the Nazis might go easy on Hana. 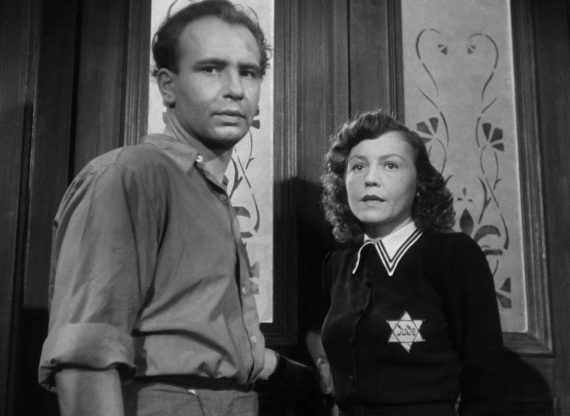 Soon her family and friends are sent out to Terezin, where they are likely to be later transported out to the death camps. Some flee the country before they are forced out of their homes, but Hana is determined to stay in her homeland. Her marriage protects her for a while, but eventually, she too is forced to live in the Terezin ghetto.

Erik Kolár, the writer of the film’s original treatment, based the story on his own experiences in Terezin. Radok had personal connections to the story too. He had a Jewish father and a Catholic mother. He was initially exempted from deportation as he was a ‘mischling’ (‘half-Jew’) but had to live an undercover existence during the occupation and he lost many relatives in the Holocaust.

Radok was asked to develop Kolár’s treatment into a full script along with Kolár himself and Mojmír Drvota. Radok thought the original treatment stuck too rigidly to the literal reality of what happened though. He wanted to make something that mixed newsreel style reportage with stylised artistry. The results remain astonishing to this day.

The Projection Booth commentators on this disc describe how many more recent mainstream Holocaust films can be classed as “emotional exploitation” or “emotional pornography”. They use predictable melodramatic tropes to milk emotions, exploiting the horrific reality for the tear-jerker crowd. Distant Journey is more bold and daring than anything like this, yet was made only a few years after the events. There’s no melodrama or sensationalism in Radok’s film. 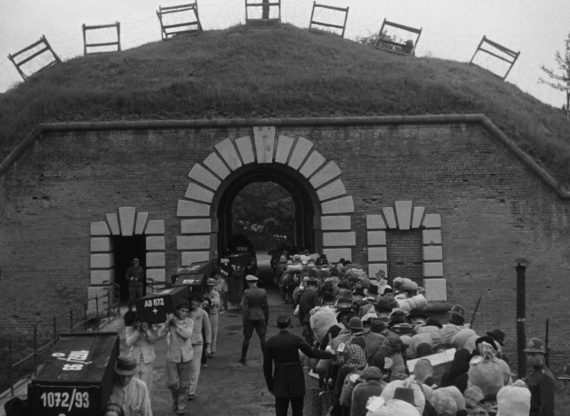 Expressionism is used to make the experience of being in the camp/ghetto feel like a nightmare. There are surreal sequences, such as when a band play some sort of warped New Orleans funeral jazz whilst Jews are herded towards a train to the death camps. There’s an effective use of shadows, depth and camera movement to elicit mood and atmosphere too. Sound is also put to stunning use, with looping and warping piano scales creating a terrifying soundscape to a shocking suicide scene early on.

Perhaps the most radical technique the director used though was mixing documentary/newsreel footage with his more artistically-inclined narrative. They are often directly combined, with shots from the drama pulled down to a small picture-in-picture in the corner, whilst shots from Triumph of the Will and other period footage plays in the foreground. Some criticised this technique at the time, but I feel it gives you the best of both worlds. You get the emotional resonance from the expressionistic sequences and also the raw horror of the documentary footage, which reminds you that the story is far from the realm of fantasy.

Radok doesn’t openly show as much graphic violence as later holocaust films but your imagination and knowledge/memory of what happened fills in the gaps more effectively.

Some have compared Radok to Orson Welles and many parallels can be seen. Both made stylistically striking and forward-thinking films right from their debuts. They both came to cinema from the theatre too, so didn’t have any formal background or training in filmmaking. Like Welles, Radok didn’t know the ‘rules’ so had no trouble breaking them. Welles was actually someone who praised the film when it came to America and was also one of the first directors to bring up the Holocaust in his work, inserting documentary footage into 1946’s The Stranger. 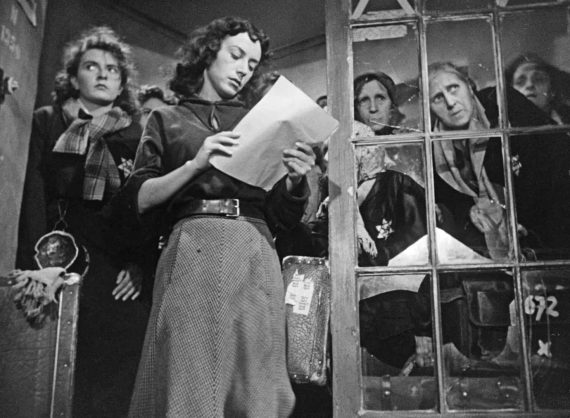 Another interesting aspect of Distant Journey that sets it apart from many Holocaust films is the fact there aren’t many Nazis depicted on screen. This is partly because of the nature of Terezin. It was a transport camp rather than a death camp. Jews and other groups the Nazis opposed to were kept there, away from the rest of the population, whilst they waited to be shipped off to the death camps. The Nazis didn’t run it in the same way either. In Terezin, Jews were largely made to govern themselves (supposedly even being forced to choose who would go to the death camps next, though that isn’t shown here). Due to this, and the fight for survival under such conditions, the inhabitants could be cruel to each other there. Examples of this are shown in the film, such as when Hana arrives and witnesses women fighting over beds, before many abuse her naivety, stealing her food.

The Nazis also used the camp for propaganda to convince outsiders that what they were doing wasn’t that bad. This is presented in a strange scene where the inhabitants clean the main street and put on a show for visitors.

That’s not to say life in Terezin was any easier though. Around 33,000 people died there, largely from malnutrition and disease. The film helps show the horrific conditions and prevents it from becoming a film about 2-dimensional cartoon villains, like the Nazis often are in WWII films. The situation is more complicated than that here.

If I were to pick fault with the film, I’d say that the final act gets a little too surreal to connect with and seems a little rushed towards its conclusion. The climactic scene when peace is declared is criticised by the Projection Booth commentary team too, but personally I found it quite effective. Yes, mass celebrations like that wouldn’t have been realistic due to the typhoid epidemic and poor health of the inhabitants, but I found the surreal use of the dissonant tones of the dismantled piano a powerful aural signifier of the event.

Overall then, not only is Distant Journey impressively bold in tackling such subject matter so soon after the fact, but in doing so in such a unique fashion. As such, it feels fresh over 70-years on, even after the countless Holocaust dramas that have come since. So, not only was it one of the first, I believe it’s one of the best. 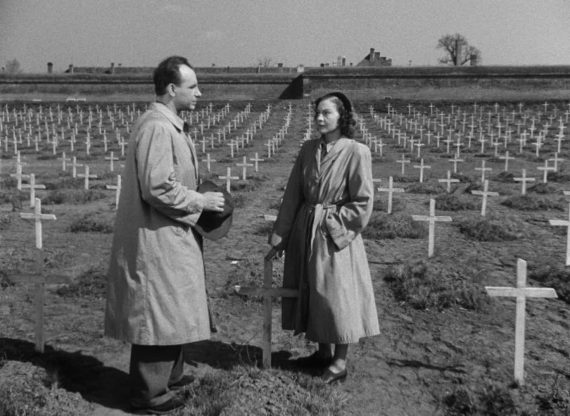 Distant Journey is out on 25th May on region-free Blu-Ray and DVD in the UK, released by Second Run. There’s a statement at the start of the film describing how some fragments were missing from the positive used for most of the restoration, so had to be sourced elsewhere, but I didn’t spot any major discrepancies. I thought the transfer looked and sounded fantastic.

I’m a huge fan of the Projection Booth commentaries often included on Second Run’s releases and this one doesn’t disappoint. The team provide a rich insight into the film and, as usual, keep the pace up and have a great rapport. They address some criticisms of the film too, which allows for a more even-handed commentary than most.

The two shorts are fantastic. ‘The Opening of the Wells’ is a stunningly beautiful, poetic piece accompanied by a wonderful piece of music. ‘Butterflies Don’t Live Here’ provides a deeply touching look at artwork produced by children in the transport camp.

As always, the booklet included is required reading, with well-researched thoughts and background on the film and its makers.