Arrow continue to delve into the back catalogue of prolific 80s genre filmmaker and one-time mini movie mogul Nico Mastorakis this time unearthing (after the likes of Island of death, The Wind and The Zero Boys) 1982’s occult gem Blood Tide. Nico doesn’t direct this time around but still writes and produces, his prints all over this slice of 80s horror hokum.

Set on a scenic and sunny Greek island, Blood Tide sees young couple Sherry and Neil (Weller and Kove) arriving in search of Neil’s gone AWOL sister, Madeline (Shelton). Said sister seems to be obsessed with the legend of an ancient demonic sea creature which the inhabitants have a tendency of sacrificing virgins to (as you do!). Sherry and Neil quickly make friends with American treasure hunter (and the often inebriated) Frye (Earl Jones), who sets said sea creature free causing it to go on the rampage, sending the locals into a frenzy, thus meaning Madeline might just be the next on the sacrifice menu. 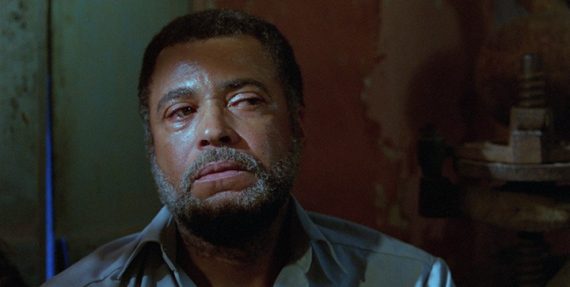 While it’s got all the trappings of a B-movie creature feature, Blood Tide (while still containing its fair share of barminess!) is a little classier than your usual virgin-hungry-sea-monster-movie. The Greek island is a great sun soaked setting which adds production value (and was possibly re-used in Mastorakis’ The Wind?!) and with a cast that includes award winners such as James Earl Jones, Jose Ferrer and Lila Kedrova the film is a lot less shlocky than one might expect. The trio bring class and a bit of gravitas to proceedings with Earl Jones on fine fun form as the constantly sozzled and ranting-to-himself treasure hunter. He seems to be having a ball! The young cast are also good including a pre-Karate Kid Martin Kove and the stunning Deborah Shelton.

First time director Richard Jefferies (who would go onto write ace cult indie horror, Scarecrows) instills proceedings with a groovy occult vibe that gives the film atmosphere and a sense of dread despite the silly sea monster set-up. Said monster is only seen a handful of times and while dated, is still realised via some cool old school animatronics. The concept and slow pacing may not be for the more “serious” cinema fan, but Blood Tide is nevertheless a fun slice of 80s aquatic occult horror that genre fans should seek out and discover.

Blood Tide is released on Blu Ray from Arrow Video on the 25th May 2020 and comes with the following extra features: