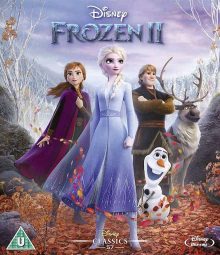 With schools around the country (and much of the world) closed for the time being and millions of kids sat at home bored, parents are crying out for things to do with their children. So, here to the rescue are the team behind Disney’s Frozen 2, who have produced some fun activity sheets to keep your little ones busy for a while.

And this is all in celebration of the release of Frozen 2 on home video formats. Here’s some more info from the press release:

Walt Disney Animation Studios’ Frozen 2 has melted hearts around the world, becoming the No. 1 animated feature of all time. The follow-up to 2013’s hit Oscar®-winning Best Animated Feature, Frozen, comes home, with a sing-along version and all-new extras, on Digital in 4K Ultra HD, HD on Mar. 16, and on 4K Ultra HD, Blu-ray and DVD on Mar. 30.

In Frozen 2, the answer to why Elsa was born with magical powers is calling her and threatening her kingdom. Together with Anna, Kristoff, Olaf and Sven, she sets out on a dangerous but remarkable journey. In Frozen, Elsa feared her powers were too much for the world. In the highly anticipated sequel, she must hope they are enough.