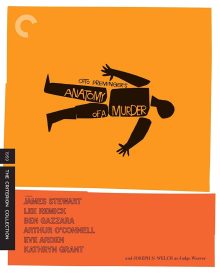 Legal or courtroom dramas have graced cinema screens since the early days, but they enjoyed a particularly well regarded and fruitful period during the late 50s and early 60s, with notable bookends being 12 Angry Men (1957) and To Kill a Mockingbird (1962). In the middle of these was Otto Preminger’s highly respected Anatomy of a Murder (1959). It’s regarded as one of the finest examples of the genre and Criterion are soon to be adding it to their illustrious collection in the UK, so I thought I should lay my own judgement on the film, which I’ve been meaning to watch for a long time.

The film’s script, by Wendell Mayes, was an adaptation of a novel by John D. Voelker (writing under the pen name of Robert Traver) who based the story on a real-life case in which he was the defence attorney. The case in the film (the names were changed from the original incident) involves the murder of barkeeper Barney Quill at the hands of Lieutenant Frederick “Manny” Manion (Ben Gazzara). Manny admits to the crime but believes it was justified because Barney had just raped his wife, Laura (Lee Remick). She goes to local lawyer Paul Biegler (James Stewart), a former district attorney, to defend her husband in court.

Paul is hesitant at first but, after speaking to Manny on a couple of occasions and doing some research, believes he can clear his name with a temporary insanity plea. Along with his aged alcoholic partner Parnell McCarthy (Arthur O’Connell) and wry secretary Maida Rutledge (Eve Arden), Paul digs as deep as he can and tries every trick in the book to win the case. The mean exterior of Manny, alluring actions of Laura and tough courtroom tactics of prosecutor Claude Dancer (Scott) mean Paul’s work is cut out for him though. 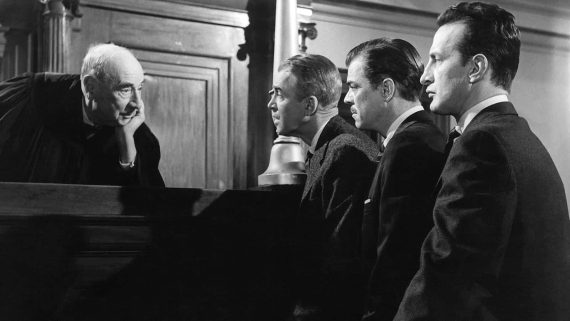 What struck me most about Anatomy of a Murder was how much of a thorough procedural it was, particularly for the period. It’s quite a long film and spends a lot of time in the courtroom, with dialogue that feels accurate, covering the case in great detail. The film got in trouble over some of these details, as some found the use of frank language about Laura’s rape startling. It managed to get by the Code though and thankfully remained fully intact. The open discussion of the matter is vital to reproducing a believable account of the case and makes for a tough, no-nonsense film.

What also stands out in the film is its moral ambiguity. In most courtroom dramas, even still now, you’re usually following a lawyer’s honourable quest for justice, attempting to free an innocent man. However, Manny isn’t so innocent. He did kill Barney and he’s clearly quite a violent and unpleasant man. So, although Paul finds legal precedent that can be used to try to acquit Manny, it’s debatable whether that is morally right. I, for one, didn’t feel that he should have got away with it, which made the film an unsettling experience. At first, I thought this was a negative point against the film, but on greater consideration, I realised it’s one of the film’s strongest points. It’s a powerful and fascinating examination of what’s more important in a court of law – morality or legality? 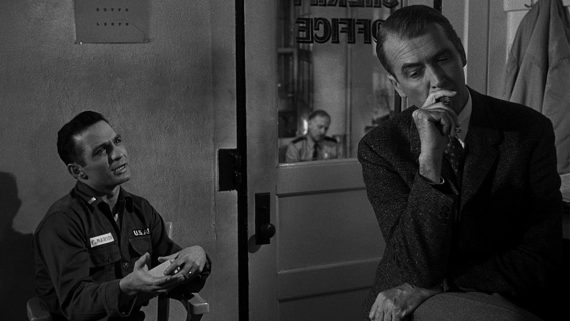 The film’s moral ambiguity stretches to its characters too. Other than perhaps Maida or Judge Weaver (Joseph N. Welch), everyone has their flaws or vices. Even our ‘hero’ Paul doesn’t come out squeaky clean, by any stretch. He doesn’t seem to trust his own client but wants to win the case anyway, using a great number of sneaky tricks rather than simply presenting clear evidence and testimony.

Preminger had a reputation as being a demanding and difficult director, but this was largely due to him being strong-willed and clear as to what he wanted. Indeed his direction here is as controlled and assured, as usual, making him a great choice for the procedural approach of the material. He studied law in his youth too, which helped. Stylistically, he uses a lot of long takes to allow his actors to maintain a steady flow and avoids basic quick-cutting close-up shots in dialogue scenes, always adding some element of interest to the frames beyond the actors’ faces. 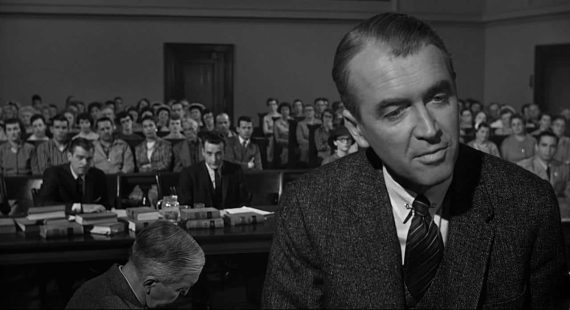 The cast are fantastic too. Stewart exudes his everyman charm in the courtroom to win people over, but behind his eyes you can sense his deep intelligence and cunning. The great George C. Scott makes a perfect opponent to him, as a slick city lawyer. Scott is like dynamite when he does his thing in court but it’s also wonderful to see him sat in the sidelines when others are working. You can sense him plotting and scheming with his glances and demeanour.

Lee Remick is also on fine form as the flirtatious Laura. She has an air of the femme fatale to her, which effectively casts doubt on her story. Gazzara, playing her murderous husband, is equally strong, proving a quietly threatening presence, exploding now and again to remind us what he’s capable of.

The whole cast is great in fact, with some superb character actors such as Eve Arden and Murray Hamilton rounding out the list. Joseph N. Welch as the judge is an interesting addition, as he wasn’t an actor but a lawyer who was famous for serving as the chief counsel for the United States Army while it was under investigation for Communist activities by Senator Joseph McCarthy’s Senate Permanent Subcommittee on Investigations. He does a fine job, despite his lack of acting experience, coming across as not only a believable judge but a friendly and amenable sort. 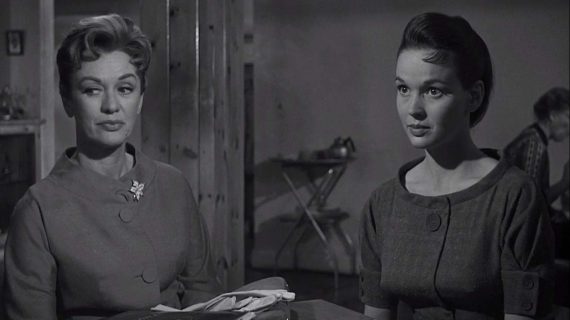 I can’t tie up this review without mentioning the music. Composed by Duke Ellington and Billy Strayhorn and played by Ellington’s orchestra, it’s one of the most famous jazz scores of all time and won three Grammys in 1959. It’s used quite sparingly but works a charm when it appears. Being a jazz fan myself, I actually owned and listened to the album long before seeing the film. It’s maybe not Ellington’s finest album, but it’s got some fantastic moments and great playing from his band.

Also making an impact away from the film itself was Saul Bass’ design work on the promotional material and opening titles. Bass produced striking imagery for countless films, but his dead body cutout shape for Anatomy of a Murder is among his most iconic. It’s hard to think of the film without conjuring up that image and of course Criterion had to use it for the cover of this release.

All-in-all then, it’s an incredibly gripping courtroom drama that was daringly ahead of its time in its attention to detail and unwavering eye. With murky morals and flawed characters, it’s tough and thought-provoking too. Buoyed by a fantastic cast and measured direction, it’s a justified classic.

Anatomy of a Murder is out on 16th March on Blu-Ray in the UK, released by The Criterion Collection. The restoration is great, with sharp details and a rich dynamic range. There are one or two brief soft moments, but I imagine these were as originally shot/presented. I watched the film with the mono soundtrack and found it came through nicely. I tried the 5.1 track briefly though and must admit I found the dialogue a little less clear than on the mono track.

I’m always disappointed when there’s no commentary track, but it’s such a long film it’s excusable and what we have in place of one covers everything you might want to know about the film. Hirsch provides illuminating thoughts and background on Preminger and his work. Giddins gives an extensive look at the wonderful score and general thoughts on jazz music in films of the period. The Saul Bass documentary helps you appreciate the talent and influence of the great designer. The newsreel footage lets you see behind the scenes. The ‘Firing Line’ excerpts present some of Preminger’s thoughts on censorship. The ‘Anatomy of “Anatomy”’ provides the perspective of locals living in the town where the film was shot. Even the trailer is fun, with it presenting its stars, writer and director as characters in a trial. So overall, it’s a wonderful package for a great film.