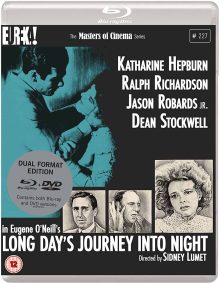 Eugene O’Neill’s Long Day’s Journey into Night is considered one of the finest American plays of the 20th Century. However, if O’Neill had his way, it would never have been put on stage and even the publication of its manuscript would have been delayed long enough to perhaps reduce it to a curious footnote in the writer’s oeuvre.

Presumably because of the clearly autobiographical elements of the play, O’Neill had only two copies made of his manuscript and sent one to the publishers Random House with strict instructions not to publish the work until 25 years after his death. Another copy was sent to the O’Neill collection in Yale University and he also stated that he didn’t ever want the script producing as a play.

However, after he died in 1953, his widow Carlotta Monterey demanded that Random House publish the manuscript. They refused, but due to legal reasons they couldn’t stop Monterey from taking it off their hands and publishing it elsewhere. Sure enough, not long after in early 1956, the play was performed on stage in Sweden and later that year in the US. So all of O’Neill’s wishes were ignored. This may have been a stab in the back of the author but it was a Godsend for theatre fans, as it became highly regarded and played around the world in esteemed productions.

Sidney Lumet, who began his career in the theatre and had made several acclaimed film and TV adaptations of stage plays (including O’Neill’s The Iceman Cometh), was the first to take on the challenge of adapting the lengthy Long Day’s Journey into Night for the big screen. It was a critical success, sweeping the acting board at Cannes and gaining wins and nominations elsewhere. Eureka have picked up the film for a dual-format release on their illustrious Masters of Cinema label. Being a fan of Lumet’s work, I requested a copy to review. 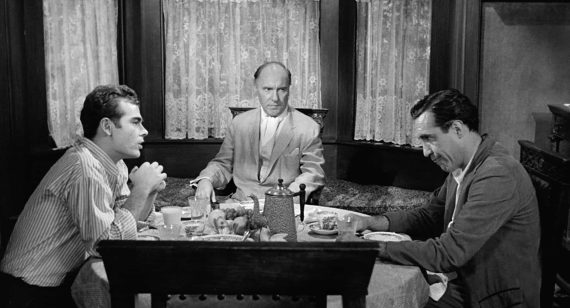 Long Day’s Journey into Night sees the Tyrone family gather in their seaside home over the course of a day. A major event taking place is the confirmation by a doctor of the cause for the youngest son Edmund’s (Dean Stockwell) ill-health. His elder brother Jamie (Jason Robards) is quite certain it’s consumption (now better known as tuberculosis) and father James (Ralph Richardson) fears so too. However, mother Mary (Katharine Hepburn) clings on to the belief it’s just a ‘summer cold’, though she’s clearly worried. So worried, in fact, that she seems to be slipping back to behaviour she demonstrated in the past when she had a breakdown. It later turns out she’s a morphine addict who is lapsing after coming clean, and we also learn the rest of the family aren’t without their vices and problems, which unfurl during a day of bitter confrontations and frayed nerves.

It’s a tough and uncompromising film, made all the more uncomfortable by its near-three-hour running time and claustrophobic single setting (though we spend some time in the garden, porch and garage in the first half). It’s not surprising O’Neill didn’t want the play to be released in his lifetime as all the characters, who were based on his own family, are deeply flawed and there’s little warmth between them. 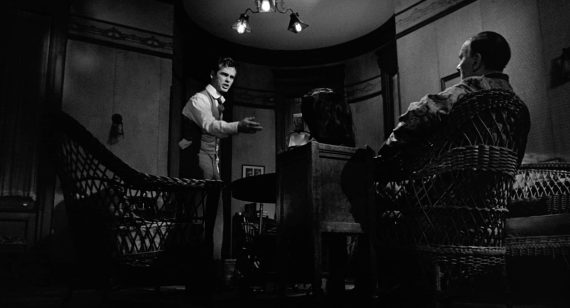 This negative aura might not make for easy viewing, but it makes for a powerful film that examines rich, fascinating characters. All four key players (there is a fifth character, a maid played by Jeanne Barr, but she doesn’t have a great deal to do), have something eating at them, be it a disease, addiction or regret. Rather than offer each other support, they tend to be on the defensive, attacking each other psychologically and physically at one point.

The nature of the production, with its minimal locations and slight narrative, means its success lives and dies by its actors. Thankfully, the cast in Lumet’s film is magnificent. Richardson and Hepburn play it quite large, but get away with it. Richardson’s character is a stage actor, so his occasionally quite grand demeanour fits the bill. Hepburn maybe overdoes it, but hers remains a fearless, boldly physical performance that adds to the discomfort of the film. Robards and particularly Stockwell display a more nuanced style, presumably linked to ‘the method’ which was becoming more commonplace at the time. Robards is perhaps pitched somewhere between that and a more traditional theatrical style though, with a slightly more showy performance than Stockwell’s. As such, it’s Robards who stood out for me, though the whole cast is exceptional. 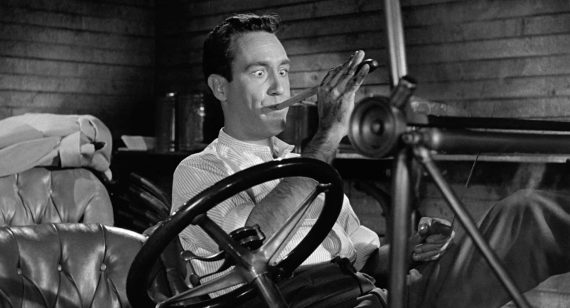 Lumet does a fine job of making the adaptation cinematic without losing the required oppressive atmosphere achieved through the confined location. He adopts quite a lot of camera movement to keep things moving, without ever seeming flashy or overly-stylised. The lighting is moody and atmospheric too, adding a darkly beautiful quality to its look. Lumet keeps most takes quite long, giving the actors room to work with the material and ‘live’ in the scene without the distraction of breaking it down into different shots.

It’s a film that really stays with you. It’s not one I’ll watch again in a hurry, it must be said, but it’s an incredibly powerful and intense drama that rips the heart out of the perceived notion of the family unit. As a showcase for four great actors, it’s excellent too, even if they occasionally amp things up a touch too far. Strongly recommended, just don’t expect an easy ride. 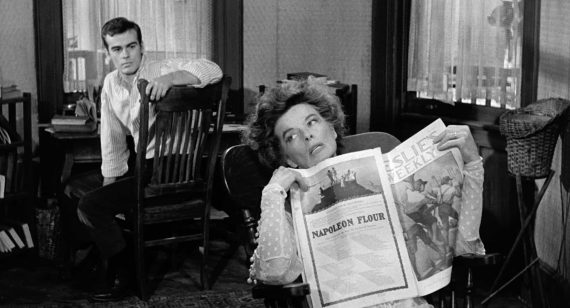 Long Day’s Journey into Night is out on 16th March on dual format Blu-Ray and DVD in the UK, released by Eureka as part of their Masters of Cinema series. For the most part, the picture quality is great, with a detailed and fairly sharp image. However, there were a couple of brief, slight signs of damage in the form of light stains on a handful of frames. I found no fault with the audio.

It looks to be a small list on paper, but with the film being so long, the commentary spans almost 3 hours, so goes into incredible depth in analysing the film and providing further details about the play, production and other adaptations of the work. It’s a superb track and Harrison should be applauded for doing such a great job over such a long period of time. There’s not even any downtime, which is quite a feat. Gambin’s essay is very interesting too, though it discusses Lumet’s other stage adaptations rather than Long Day’s Journey Into Night. I guess it would step on the toes of the commentary if it did focus on that.

Unfortunately, I didn’t receive a copy of the booklet in time for my review, so can’t comment on that, but it’s rare that Eureka’s booklets don’t come recommended, so I’m sure it’s a fine addition to this already impressive set.