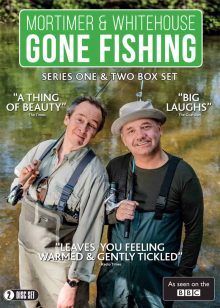 Has there ever been a nicer television programme than Mortimer and Whitehouse Gone Fishing? In this historical moment of division, deceit and hostility, there’s something unbelievably comforting about the opportunity to spend a bit of time with two old friends, chatting and fooling around against a backdrop of some of Britain’s finest scenery. This box set collects all the episodes from the first two series, and every one is a low-key, bumbling joy.

In 2015, Bob Mortimer was preparing for a live tour with comedy partner Vic Reeves, when a medical check-up revealed he was in urgent need of a triple heart bypass. The operation was a success, but in the aftermath, friends worried that Bob – never the most active of celebrities in the first place – was showing signs of retreating into himself. One of those friends was Paul Whitehouse, who had recently come through his own heart troubles. He recognized Bob’s behaviour as a common reaction to major heart surgery and set about luring Bob out of his house. A keen fisherman, Paul knew that Bob had fished in his youth, and began inviting him on trips. The plan not only worked, but played a role in galvanizing Bob into a new period of career activity that is fast cementing his status as a national treasure.

Prior to 2015, Bob had done the odd bit without Vic, but mainly stayed within their double-act. Since 2015, he’s starred in and won a series of Taskmaster and started Athletico Mince, a hit, vaguely football themed podcast that will soon reach 100 episodes. And in 2018, he suggested to Paul that their fishing trips could make a good programme. 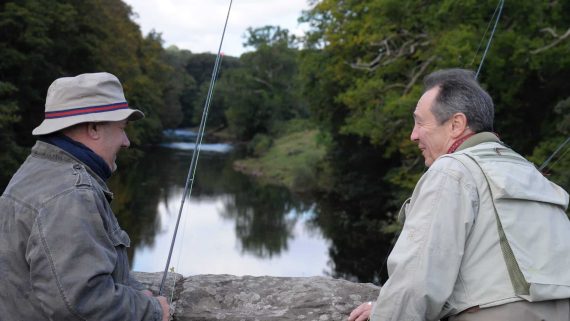 The format of the resulting show is fairly consistent: the two arrive at a picturesque location with the intention of catching a specific breed of fish. As the experienced fisherman, Paul is in charge of equipment and approach. Over the course of the first day, he attempts to keep Bob focused while despairing at his friend’s technique. At night, Bob takes the lead, picking a quirky place for the pair to stay and cooking ‘heart-healthy’ meals. A second day of fishing follows, and then they pack up and go home. It doesn’t sound like much, but it’s utterly charming. It’s beautifully shot, and the fishing creates a pleasant low-level tension as they wait for a bite.

Really, though, it’s all about the conversation and the relationship between Bob and Paul. They’ve known each other since the very early days of Vic Reeves’ Big Night Out and clearly enjoy each other’s company. To an extent Paul takes the straight man role – he genuinely wants to fish. Bob doesn’t quite have the patience and asks lots of silly questions. He also falls over a lot. Yet both are (obviously) very funny. Further, their recent experiences of poor health have left them in reflective mood. From episode to episode, they discuss aging and their changing priorities, while looking back at the shape of their careers. Though they’re very different performers and personalities, both acknowledge their good fortune in separately finding inspirational partners: Vic for Bob, and Harry Enfield for Paul. As well as the fish and the locations, episodes are differentiated by vague themes of chat, occasionally bolstered by guests and visits away from the riverbank. In different first series episodes, for example, they have their health assessed by a doctor and consider cosmetic procedures. These are sections are fun, but seem forced and a little staged compared with the fishing and cooking sequences. 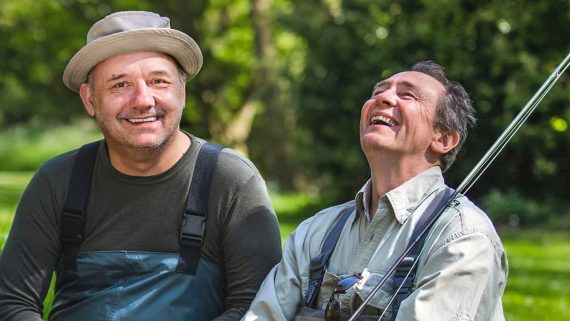 The obvious comparison for Gone Fishing is Steve Coogan and Rob Brydon in The Trip – it’s two hugely successful and beloved comedians putting their friendship on screen – but the tone and intent is quite different. Whereas Coogan and Brydon focus on the cracks and tensions in their relationship in a way that is clearly embellished with fiction, Mortimer and Whitehouse are warm and supportive in a way that feels much more authentic. They may not do much – and even when they catch fish they usually put them back – but watching them do it is a consistent delight.

The two series collection of Mortimer and Whitehouse Gone Fishing has been cannily released in time for Christmas. It’s the perfect gift for just about anyone who likes to smile. The two discs come in separate cases in a cardboard sleeve. All 12 episodes have clear, bright transfers. Dialogue is clear, although hard of hearing subtitles are available for anyone who struggles. Sadly there are not additional features; it would have been great to get some outtakes. But if anyone needs more, there’s always the book and audiobook.