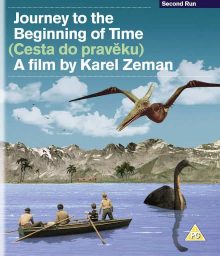 Journey to the Beginning of Time (a.k.a. Cesta do praveku) was the first film to see the writer/director/animator Karel Zeman move into live-action films (incorporating animated elements) after previously working in solely animated shorts and one feature prior to this. It was a commercial success in its home country of Czechoslovakia, becoming somewhat of a family classic over the years as it was regularly screened on TV. It also won awards at the Venice and Mannheim film festivals and was dubbed and re-edited, with a few new scenes added, for a US release. Despite this success, Journey to the Beginning of Time has never had a home entertainment release in the UK though (unless an old VHS release has evaded me). Thankfully, Second Run, who’ve been gradually adding Zeman’s films to their impressive roster of Czech classics, are finally bringing it out over here on Blu-ray and DVD. After falling madly in love with Zeman’s work in The Fabulous Baron Munchausen and Invention for Destruction, I didn’t hesitate to request a screener for this latest release.

Journey to the Beginning of Time has a simple but fantastical premise. After the youngest of a group of four boys discovers a fossilised trilobite, they all become interested in palaeontology and prehistory. They initially visit a museum but feel they’d learn more by seeing things first-hand. Luckily, there’s a magical portal in a cave by a nearby river and they set off on a scientific expedition to the past, moving through different eras as they travel down the river. They take in some astonishing sights and keep a track of it all in their journal and through photographs taken by one of the boys. 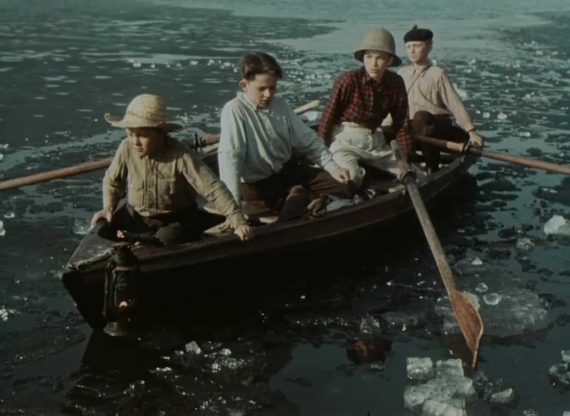 What marks Journey to the Beginning of Time apart from other dinosaur movies from the past (and present, unless you include the TV series Walking With Dinosaurs) is that the creatures aren’t merely monsters our protagonists must kill or escape from. Zeman takes an educational documentary-style approach, with the boys largely just observing life from these prehistoric eras at a distance, with the dinosaurs and other assorted beasts only occasionally troubling them. To maintain the integrity of this approach, Zeman worked alongside the Czech palaeontologist Josef Augusta on planning and designing the film. He also took great inspiration from the palaeo-art of the celebrated Czech artist Zdeněk Burian in the look of his creatures.

I use the term creatures because the film isn’t just about dinosaurs. The boys travel through several distinct time periods and each is covered quite accurately. The Tertiary era, for instance, presents them (and the audience) with a wide range of animals that bear more than a passing resemblance to those we know in present times. So we get an elephant-like animal with tusks growing directly out of its lower jaw, a sabre-toothed tiger, a woolly mammoth and even some flamingos and giraffes. When we eventually move into the Mesozoic era, we then get treated to sights of a Stegosaurus, Brontosaurus and Ceratosaurus, among other dinosaurs. That barely scratches the surface of the vast menagerie of animals depicted in the film though. I can’t think of anything else that covers such a range of prehistoric creatures. 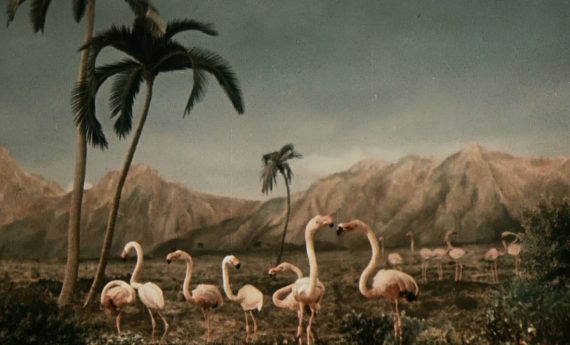 As such, especially given the gentle tone with minimal ‘action’, the film thrives on a sense of discovery and wonder rather than excitement or fear. Those expecting a proto-Jurassic Park might be disappointed then, but those who long to recapture the simple pleasure of learning about dinosaurs as a child will find much to enjoy.

The sense of wonder wouldn’t be anywhere near as effective if it weren’t for the magic of the work done by Zeman and his effects/production-design team though. Like in his later films, Zeman throws in every effect he can muster to bring his world alive. Rather than stick to one or two techniques as was the norm back then (and is now, with the heavy reliance on CGI for special effects) he uses what he thinks works best for each shot, from stop-motion to cell/cutout animation, to matte paintings, to puppets and animatronics, it is all seamlessly integrated to send the audience back in time with the film’s protagonists.

Granted, many of the creatures don’t look ‘realistic’ by today’s standards, but they’re incredibly effective for the time and still have a tangible beauty now. More is being done than you are sometimes aware of too, with some incredible use of mattes and backdrops that work much more seamlessly than in many 80s Hollywood films, when the technique was still popular.

The style here is much more grounded in reality than in Zeman’s later, more stylised work too. Due to this, on top of the soft, leisurely approach to the material, it didn’t have the same attention-grabbing impact that Baron Munchausen and Invention for Destruction had on me. However, I still fell in love with Journey to the Beginning of Time. It’s a lovely, gently unfolding family adventure that takes its audience on an enjoyable palaeontology lesson from a child’s-eye-view. It may not be fast-paced or action-packed, but it’s beautifully and ingeniously crafted, with an innocence and joy in exploration and discovery that has been lost in much of today’s short-attention-span entertainment. 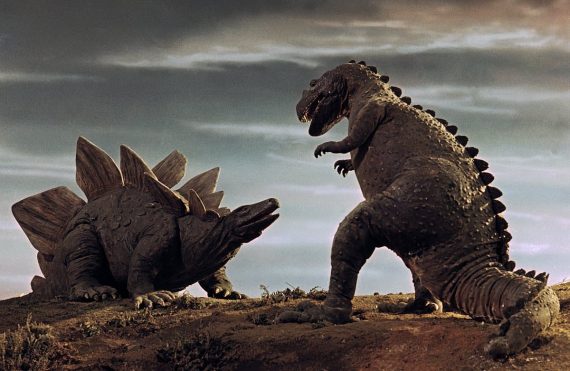 Journey to the Beginning of Time is out now on Blu-Ray and DVD in the UK, released by Second Run. The picture quality is very good. The colours are quite muted but I imagine that was the intended style or perhaps was part of how the effects elements were effectively combined.

– Journey to the Beginning of Time (1955) presented from a brand new 4K restoration of the film from original materials.
– The alternative English-dubbed version: a feature-length reconstruction of the US release cut with different opening and end sequences.
– A new filmed appreciation by John Stevenson, director of Kung-Fu Panda and Sherlock Gnomes.
– The Making of Journey to the Beginning of Time.
– Restoring the World of Fantasy featurette.
– Image gallery.
– Trailers.
– Booklet featuring new writing on the film by film historian Michael Brooke.
– Region free Blu-ray

It’s not a huge amount of material, but what we get is all first-rate. There’s a wonderfully passionate piece by John Stevenson about what makes the film special. The short ‘making of’ provides a fascinating look at how the effects were done. Much more of this can be seen in the feature-length doc, Film Adventurer Karel Zeman, included with Second Run’s The Fabulous Baron Munchausen Blu-Ray, which I thoroughly recommend to fans of this. There’s also a very short restoration featurette, which compares the original print with the restoration. This shows how much hard work goes into these restorations. The inclusion of the US dub is also welcome for completists or for those wishing to show the film to younger children unable to keep up with the subtitles. I tried to talk my girls into it but was told the dinosaurs looked too realistic for them!

The booklet shouldn’t be ignored either, as it provides an interesting analysis of the film and some background information on those involved in making it. There’s also an amusing piece about the cheeky US marketing campaign for the English dub, which claims the actors were from New York and were personally picked by William Cayton, who basically co-directed the film with Zeman. This is, of course, absolute nonsense, but somehow they got away with it.