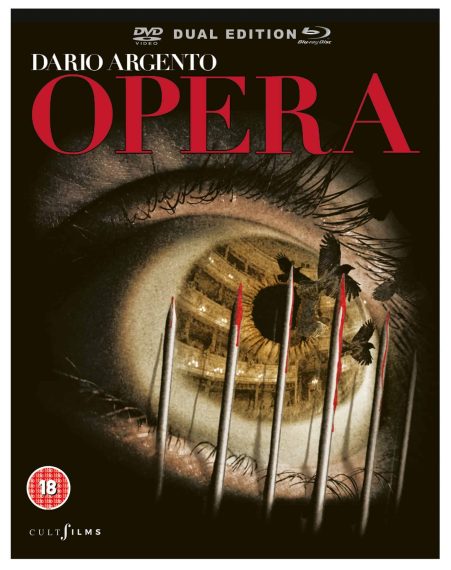 Arguably the last of the great Argento run of ther 70s and 80s (which included such classics as Deep Red, Suspiria and Tenebre), Opera is full throttle Argento and a horror master burning the last of the creative fuel that saw him produce the aforementioned genre masterpieces. Filmed in his native Rome, Opera follows Betty (Marsillach) a young operatic understudy who finds herself thrust into the leading role of Verdi’s Macbeth. No sooner has she taken on the role, than her crew and co-stars begin meeting violent deaths at the hands of a sadistic killer. Not only that, but Betty is forced to watch said killings: tied up, helpless and with her eyes pinned open forcing her to see the slayings.  This waking nightmare of murder pushes Betty to breaking point as she attempts to find out who the brutal killer is and what they have to do with her tormented past.

A giallo tour-de-force, Opera appears to be Argento (much like he did in the preceding Phenomena) off the leash and indulging his creative impulses. Whereas Phenomena was all over the place with ideas, concepts and set-pieces (in a good way!), Opera is much more focused in it’s tale of an opera singer being stalked by a crazed killer. However, the creative juice on show here almost gushes from the screen as Argento stages murder set-pieces, camera technical wizardry and his famed heightened gothic tendencies to such audacious levels, one can’t not be in awe of the imagery he conjures. From the striking opening shot of a close-up of a cawing crow, the film then segues into a series of dazzling one-take POV shots as the opera scene is set, the cast introduced and the momentum ignited. Shot on Super 35mm, Opera looks fantastic and over the course of the runtime, Argento and his crew stage some astonishing cinematic technical wizardry that is as much a character of the film as any of the cast. From the lush widescreen photography, to clever scene transitions (that camera pan to an apartment ceiling which then passes through the floor and reveals the huge opera house!), to the screen pulsating to simulate the lead’s heartbeat, to the incredible POV shot of a crow circling the opera house and attacking its attendees, Opera is a spectacle of cinematic style and technique.

On top of this, Argento goes all out with his kill scenes which are perhaps some of his most brutal. There’s a good dose of kink to the set-piece’s what with Betty being tied up and forced to watch , and the pins-on-the-eyes is still as startling now as it was back in 1987. The kills are staged with a sense of ferocity which spills over into the pace of proceedings as Betty’s world continues to spin out of control and helps to create a sort of waking nightmare feel to events. Plus if one has never seen the gun/peephole murder, prepare to have your mind blown and your eyes frazzled in amazement. Alas for all its greatness, Opera does creak under all its ambition and shows signs of giallo fatigue for Argento. A little grubbier around the edges than Argento’s previous films, with characters just ciphers for the kill scenes (save for the robust performance from leading lady Cristina Marsillach) and with coherency not always of importance , Opera threatens to buckle under its own audacity. Proceedings also reach what appears to be a satisfying ending only for the film to tack on another (less satisfying) ending that doesn’t really fit with the rest of the film and seems to be trying to tie events (ableit thinly) to Argento’s previous film, Phenomena.

Still, these are minor criticisms for what is essentially a master class in giallo horror and style. Sure, many may find this is just an exercise in style but cinema is as much style as substance and with style this good, put one’s need to be critical aside and sit back and let your eyes drink in and enjoy the stylish cinematic indulgence on show.

Opera is released on Bly Ray/DVD combo by Cult Films UK on January 21st 2019. Along with the beautiful film the disc has some impressive features including: a new 2k scan restored and re-graded in consultation with director Dario Argento (including a featurette on said restoration), Aria of Fear a brand new candid interview with director Dario Argento, and perhaps best of all the fantastic Opera Backstage which is a detailed, 40 minute, behind the scenes look at the making of the film.