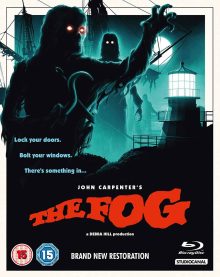 Like They Live, Prince of Darkness and Escape from New York, John Carpenter’s The Fog has been given a special restoration, makeover and a rerelease. If you’ve missed the news, Carpenter’s classics have all been reborn, all in different formats including DVD, Blu Ray and also 4K UHD.

To make the project possible, the studio returned to original camera negatives as the source material and it digitised those. The films’ cinematographers – Gary B. Kibbe and Dean Cundey – supervised and approved the restorations’ colour grading. This means, of course, you’ll get a closer – or maybe even a better – sight of how the Carpenter films should have looked when they were created.

For those who haven’t encountered The Fog, it’s a classic, uncomplicated and uncompromising ghost story. It has no pretentions. It just wants to scare.

Released in 1980, it tells the story of Antonio Bay, a picturesque Californian coastal town – a placid place with a secret. As the town sets about celebrating its 100th anniversary, a mysterious fog descends on the town. As the mist moves through the streets and houses, horrifying slaughters follow. And as the blood flows, so the story of Antonio Bay’s past sins become pitifully apparent.

By today’s gore-and-all standards it is a quaint film, but entertaining nonetheless. And, despite its age, the movie is still incredibly eerie. If it has a flaw it’s an overreliance on ‘the cat jumped out of the closet’ type of horror. Too many characters hear somebody – or something – knocking on the door, open it with trepidation only to find… nothing. And then after the audience’s heartbeat has dropped, so does the axe. Bang!

So, what does all this reconstruction and visual reinvigoration mean for The Fog? Actually, quite a lot. Though the movie might have slight – but very forgivable – weaknesses on the narrative front, it more than makes up for them in terms of cinematography and visual storytelling. The Fog is, in short, a bloody good-looking film.

It’s also a film that relies very heavily on darkness. The opening stanza shows Antonia Bay at midnight. It is a very lightless night. The screen is, for most of this chapter, black. There are moments where odd, angular glimpses of light and town life open up. Geometric shapes of colour and insight are revealed and then hidden in blackness again. It all adds up to an edgy, eerie, claustrophobic and hugely portentous atmosphere. As a viewer, you wind up praying for the sun to rise.

Black is used artfully in one of the film’s first murder scenes too. A sailor struggles in the ship’s helm to get a stricken fishing trawler to move and, as he toils, the door opens and the killer is revealed. The killer is on the screen’s left and the sailor is on the right. Between them is black. Your view of the killer crystallises, the man toils and then the killer walks in the frame’s black central rectangle. The monster disappears. You know the killer is walking toward the sailor, but when will it strike? You know the monster is there, walking with a weapon in its hand but where is it? It’s a lovely technique – darkness used to create suspense.

And, all this use of black is made possible by the film’s restoration. Many DVDs are just ropey old pressings that have been transferred lazily to DVD along with muck and fluff. We’ve all watched movies like that: movies where black is an off-grey full of artefacts, flecks and flickers. Movies where light leaks through the black to make a mediocre grey. Films where black, and indeed all colours are, well, foggy. Viewed like that, The Fog would lose a lot. Imagine this: the killer disappeared in the frame’s mushy grey centre. It just wouldn’t work half as well.

Along with helping films to shine, in this case like obsidian, restoration and ultra-high definition can put a film’s flaws into sharp focus. Ropey old visual effects are suddenly revealed in all their rubber, string and glue-gun glory. The Fog, in this form, doesn’t suffer from those problems. It has very few visual effects and so there’s nothing to be unwelcomely exposed.

In terms of extras, the DVD that we reviewed had two commentaries. True aficionados should however look out for the 4-disc collector’s edition. This boasts a UHD version, a Blu Ray copy, a huge number of extras, a book, postcards and more extras than you could shake a machete at. It all adds up to a celebration of a truly eerie film that is well worth celebrating. And it’s a film that benefits greatly from restoration.

Just make sure your TV is set up to show black as true black. It’s worth consulting the manual!

The Fog is released on EST, Blu-Ray, DVD and 4-disc Collector’s Edition including 4K UHD & Blu-Ray on 29th October in the UK.

You can also look out for selected cinemas showing any of the four John Carpenter re-releases at the website https://www.johncarpenter4k.co.uk/