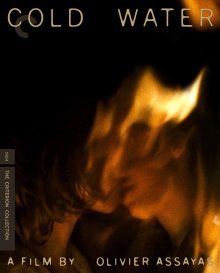 Olivier Assayas’ Cold Water (a.k.a. L’eau froide) had an interesting inception. The writer/director was originally approached by a French TV company to produce a short (just under an hour) TV movie about teenagers, meant as part of a series of similar films by another couple of directors. However, once Assayas got started on the script he got carried away and came up with a fully fledged feature screenplay. Ignoring the original request, he went ahead and shot it in its entirety and ended up with the film we see now being re-released on Blu-Ray by the Criterion Collection, 24 years later.

Set in France in the early 70s, the film follows a short period (just a few days I think) of the lives of two troubled teenagers in love. Gilles (Cyprien Fouquet) is a fairly sheltered boy who is rebelling against his bourgeois upbringing by stealing from record shops and underperforming at school. Christine (Virginie Ledoyen) comes from a working class broken home and her overbearing (and violent if you believe her stories) father is in the process of getting her committed to a care home for the mentally unstable. The first half of the film sees them try to come to terms with this at home and school. The second half is largely taken up by a big party out of town that the pair attend (after Christine escapes from the home), before running away together and facing a new harsh reality. 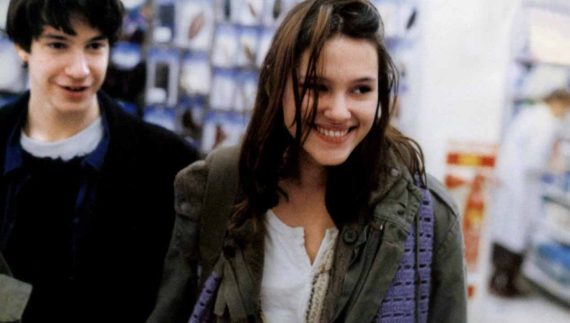 I’ve always had a thing for coming of age films as well as naturalistic low-fi indie dramas, so Cold Water was like catnip to me and I loved it. The story is very minimal. Assayas calls the film a ‘snapshot’ of an era and of his memories of youth. Indeed much of what happens is autobiographical, from what the director says in a couple of included interviews. He wasn’t interested in telling his full story though, he just wanted to capture what he remembered that time in his life felt like and he achieves this beautifully.

One particular aspect portrayed effectively here is the frustration of being on the verge of adulthood but still being treated like a child. The teenagers’ parents, teachers and other authority figures rarely listen to what they want to say and their opinions don’t matter when set against those of adults. A nice way this is demonstrated on screen is by keeping the perspective always from Gilles’ and Christine’s point of view. We frequently see adults in the scene step out of the room and talk about the teenagers among themselves. We see them through windows, but can’t hear what they’re saying. We know from the situations and body language though that they’re discussing the future of the two young burgeoning adults without their own input.

Speaking of the input of the central protagonists, the two lead actors are fantastic. Ledoyen is the only one with any previous acting experience. Assayas wanted to use non-actors in the teenage roles, but Ledoyen was so good he had to use her, even though Fouquet and other young actors in smaller roles hadn’t performed on screen before. The worry was that she wouldn’t be as natural, but she’s just as believable as everyone else on screen. 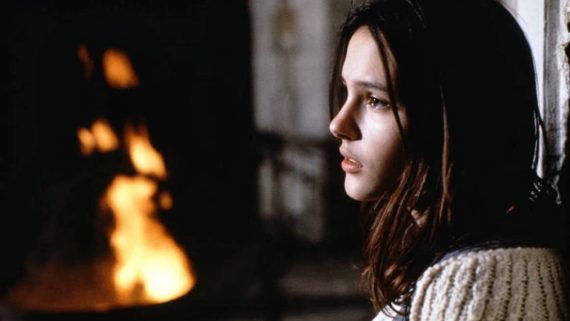 Like in his Irma Vep, which I reviewed not too long ago and was originally released shortly after this, Assayas excels in creating a totally natural world on screen. Using 16mm film, it has a grainy look similar to dramas from the 70s and the camerawork is full of movement. It’s not artificially shaky like some ‘realistic’ films, the camera moves are fairly smooth and fluid, but there’s a naturalism to the way they roam around the scene. They help give the film life, along with the performances and use of music.

The actual time placing isn’t shoved in your face. In fact it took me a while to realise it was supposed to be set in the 70s. There aren’t blatant close ups of bellbottoms or elaborate wides of street sets dressed to make this clear. The main way the era is set is through the music (which could be called blatant I guess, but I first just figured the teenagers had a taste for retro music). There’s no score (that I noticed at least). Instead, for the most part, all music used are rock/pop singles from the time and diegetic (i.e. actually played on record/the radio by characters on screen). There are some fantastic songs picked too, from Roxy Music to Leonard Cohen to Nico – the best that time period had to offer.

The loose atmosphere might not appeal to those who like a more solid narrative or message that can be analysed. I appreciated this approach though. As Assayas puts it nicely in one of the enclosed interviews, “the message is that there is no message… that’s what youth is about”. He’s particularly referring here to the ending of the film, which swiftly cuts everything short and hides a crucial piece of information from the audience. It’s equally frustrating and perfect in tying up this polaroid view.

Overall, it’s a wonderfully genuine and raw portrayal of teenage frustration. It may be slight of plot, but it’s full of life. It’s a striking and intoxicating snapshot of an era and age that’s a pleasure to experience.

Cold Water is out on 10th September on Blu-Ray in the UK, released by The Criterion Collection. The transfer effectively translates the rich grain of the 16mm source material to a HD screen.

There aren’t as many features as some Criterion editions, but what is here is gold. The two interviews dig quite deep into the film’s inception, production and intentions. The TV excerpt also helps appreciate where the film was coming from and is presented in a loose, fun fashion.