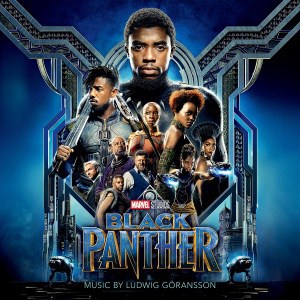 As I may have mentioned in my earlier film review, Black Panther is the kind of superhero movie that deserves accolades just for being, but as we all know, it takes more than great visuals, amazingly cool characters, and a timely story to make a movie great. Sound effects, music and dialogue matter just as much in a film’s success, and the score soundtrack to this movie is no different.

The Marvel hero called T’Challa, aka Black Panther, is king of a hyper-developed, Afrofuturist civilisation called Wakanda which is located in Africa. As such, it is unsurprising that African influences pervade the score with rhythmic percussive instrumentation to the fore in most of the tracks. This is particularly so in tracks such as: ‘Wakanda Origins’, ‘Waterfall Fight’ and Killmonger vs. T’Challa. The latter almost sounding very much like the Taiko percussion motif found in the score soundtrack of the movie ‘Wolverine’, which happened to be based mostly in Japan.

Composer, Ludwig Goransson, did well to bring something extra to the Black Panther score with a veritable palette of non-African musical influences. For example, he successfully differentiated many tracks by overlaying tribal styles, sometimes mixed in with electronica, such as in ‘Outsider’ and ‘Questioning Klaue’, or used key character inspirations, such as in a couple of aptly themed Erik Killmonger and Ulysses Klaue tracks featuring howls and mad hyena cackling

Furthermore, the ethereal sonic canvas for dream like sequences in the movie are provided by tracks such as ‘Ancestral Plane’ and ‘Killmonger’s Dream’ which did much to heighten the sense of spirituality associated with key revelatory scenes in the movie. Finally, tracks such as the ‘The Great Mound Battle’ and ‘Glory to Bast’ delivered some excellent fusion of African chants, orchestral music, choral themes, martial brass and strings, as well as even more Taiko.

Overall, this score is very much a work of discovery, similar to Wakanda in spirit, which leaves the listener with a sense of amazement at the hidden depths of an essential character and storyline among the pantheon of heroes in the Marvel Cinematic Universe.