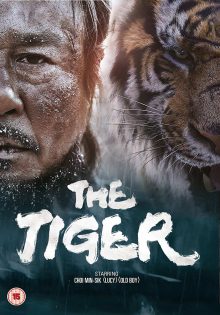 South Korea has never been a country to stick to one straight genre in its films, and The Tiger (a.k.a. The Tiger: An Old Hunter’s Tale or Daeho in Korean, literally meaning ‘big tiger’) is no different. Fusing historical drama with action and even a little dose of monster movie, it’s an epic adventure, directed by Park Hoon-jung (New World, I Saw the Devil [Writer]) that won a host of Asian cinema awards last year. It’s now made it to British soil on Blu-Ray and DVD, courtesy of Eureka Entertainment.

The Tiger is set around Mount Jirisan in Japanese-occupied Korea in 1925. Chun Man-duk (Min-sik Choi), a once legendary hunter, lives there with his teenage son, Seok (Sung Yoo-bin). After a tiger killed Man-duk’s wife, he has hung up his rifle though and become a drunk, much to the shame of Seok, who wants to move into the nearby town and marry his sweetheart, now that he’s 16. As this family drama unfolds, we follow the quest of the Japanese Governor-General (Ren Osugi) who wants to kill all the Korean tigers to send a message to the people. Gu-kyung (Jung Man-sik) and his band of hunters have been hired to get rid of the tigers in Jirisan where the final one remains, the much feared ‘Mountain Lord’. As the cruel Gu-kyung struggles to track down the Lord, he asks for help from Man-duk who once hunted with him, but the ageing man refuses. As well as fearing for the safety of his son, it seems Man-duk has a close personal link to the tiger that keeps him from hunting him down. As the Governor-General gets ever more desperate though and cruel tactics are employed to tempt Man-duk back, he’s forced to face his old adversary once and for all. 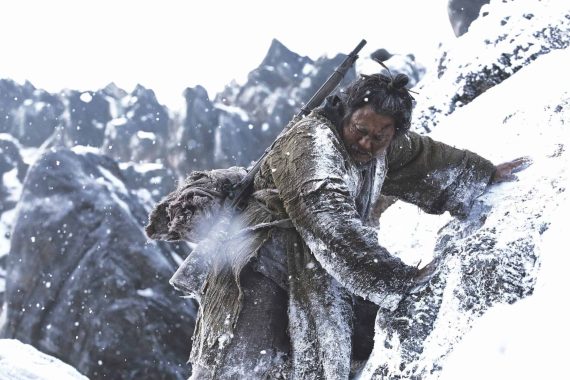 The Tiger starts off very well with a tense and beautifully executed hunting flashback, when Man-duk takes down a large tiger alone in the woods. The first hour or so are solid too, but it overstays its welcome after a while and, on top of feeling drawn out and repetitive, it gets rather ridiculous. I’m all for suspension of disbelief when I go to the cinema, but this pushes the boundaries a bit too far for a film that puts much importance on the historical context in which it’s set. For one, the anthropomorphism of the tiger itself gets rather silly in the second half of the film. I can’t give specific examples without spoiling the film, but believe me, it gets far-fetched. Also, the lengths to which the Japanese go to try and kill the beast are ridiculous and there are far too many sequences when the tiger is surrounded by men with guns yet hardly anyone shoots or if they do they somehow miss this gigantic monster mere feet away from them. I don’t mind silly stuff like this in a cheesy action movie, but as this takes itself rather seriously and is mounted on such an epic scale, the daftness of it all didn’t work in context for me.

That said, the film isn’t without merit. Some of the action set pieces are particularly exciting and the whole thing is beautifully shot with fantastic period production design. It certainly looks the part of a two-and-a-half hour epic, even if the content doesn’t justify the length. Some of the drama is quite effective too, although I found I felt more for the tiger than any of the human characters and more often than not the story lurches into melodramatic territory.

The special effects are what won the film two of its awards and these are almost great, but just miss the mark for me. The tiger itself, which is completely CG, looks fantastic and moves naturally, but the compositing (i.e. the fusing of CGI and filmed ‘real life’ elements) isn’t always well pulled off, so the tiger occasionally doesn’t look like he’s there with the actors.

So overall it’s overlong and overblown, but if you can accept it for the hammy action melodrama that it is, the film is well made enough to work. Handsomely mounted and not without exciting or touching moments, it’s solid, grand entertainment, even if it’s often hard to swallow and outstays its welcome after a while.

The Tiger is out on 6th November on Blu-Ray and DVD in the UK, released by Eureka. I watched the Blu-Ray version and the picture and sound quality is first rate.

Unfortunately there are no special features included other than the customary trailers.