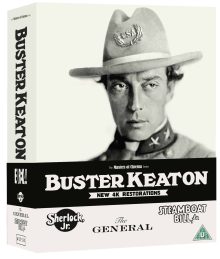 For a long time, Buster Keaton stood in the shadow of his silent comedy ‘rival’ Charlie Chaplin. Although Keaton’s shorts were very popular, his move into features in the 1920s followed a rocky path commercially speaking and led to his contract with United Artists being sold to MGM, who didn’t allow the actor/director the kind of freedom he desired. This caused the quality of Keaton’s films to decline into the 30s and his personal life took a similar downward spiral. As such, he wasn’t considered as important a figure in cinematic history as Chaplin was for a long time. Over the years though, as new generations of critics and filmmakers discovered Keaton’s work, his star shone ever brighter and now he’s considered the equal, or often the better of his famous peer. Three of the films possibly most responsible for this respect are being released together by Eureka in this handsome and superbly compiled Blu-Ray box set, as part of their esteemed Masters of Cinema collection. The titles are Sherlock Jr, The General and Steamboat Bill, Jr.

Sherlock Jr. is a film that tells two stories in one (a feat warned against in an opening caption). Framing everything is the tale of a projectionist (Keaton) who wants to become a detective. He attempts to put his skills to work when his girlfriend’s father’s watch is stolen, but a rival to the girl’s affections, who we see steal it, has set Keaton up as the culprit. Keaton is sent off on his own to his job at the cinema, where he falls asleep. This is where the second story comes into play, as he dreams he can enter the film on screen. There he plays the suave and skilled titular detective, who solves a similar mystery to his own and attempts to escape from danger with his girl in hand.

Sherlock Jr. was hugely ahead of its time with its post-modern aspects where our protagonist steps into a film within the film. It also features some incredible filmmaking trickery when this idea is introduced. There’s a wonderful sequence when Keaton first steps into the screen and the background keeps changing whilst he stays in the same spot. The cuts are seamless as Keaton finds himself in different types of trouble whenever he ends up somewhere new. It’s a truly magical scene that alone is enough to recommend the film to anyone. 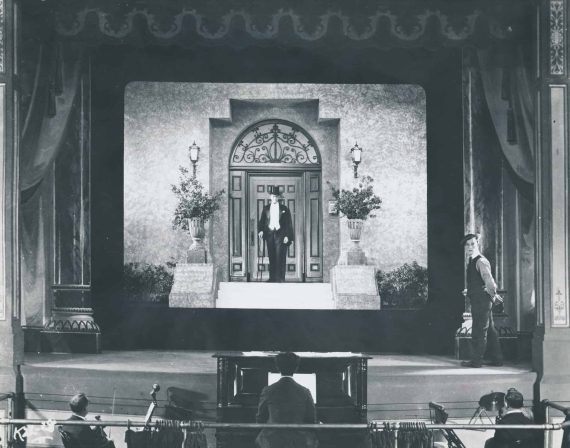 There’s much to love in every scene though. From some still genuinely funny comedy skits (the ‘finding a dollar’ sequence at the beginning had me laughing out loud) to some subtly sweet moments between Keaton and his love, to some incredible stunts, the film fires on all cylinders for its brief 45 minute running time. The story may be slight, but there’s so much to enjoy and the film is so endlessly inventive that you don’t get the chance to grow bored or long for more ‘substance’.

The physical comedy and stunt work is always a big draw in Keaton’s work and he doesn’t disappoint here. There are nice simple moments that work a charm, like when Keaton ‘shadows his man’ a little too closely but nonetheless effectively, and there are also several jaw dropping sequences that will cause you to hit rewind to see if he actually did what you think he did. One such stunt sees Keaton jump through a window into a costume box to instantly mask his identity, and later he seemingly jumps through the stomach of his assistant! There’s a thrilling motorbike stunt that soon follows where Keaton rides solo on the handlebars. This ends in an impressive car chase too, with a wonderful water-set pay-off.

It’s possibly the greatest showcase of everything Keaton was famous for, all crammed into one lean package. Exciting, hilarious, inventive, it’s a short, sweet slice of perfection and an absolute delight from start to finish.

The General sees Keaton take an actual event from the American Civil War and put his own inimitable spin on it. He plays Johnnie Gray, a young train engineer who wants to enlist in the Confederate Army to impress his fiancée Annabelle Lee (Marion Mack). He’s not allowed though due to the importance of his job in the war effort, a fact that Annabelle and his future father-in-law don’t understand. They think he’s a coward and Annabelle refuses to speak to him until he’s in uniform. This goes on for a year until his precious train, ‘The General’, is stolen by Union spies whilst his girl is onboard. This prompts a desperate rescue attempt as Johnnie battles on, undeterred by the Union boys, who out-man and out-gun him.

The General is quite a different film to the others in the set and to much of Keaton’s output, toning down the comedy and amping up the drama, a fact that put many people off at the time of release (critics and audiences alike). Since then it has grown in stature though and even made it into the prestigious Sight and Sound Top 10 Greatest Films of All Time list in both the 70s and 80s. 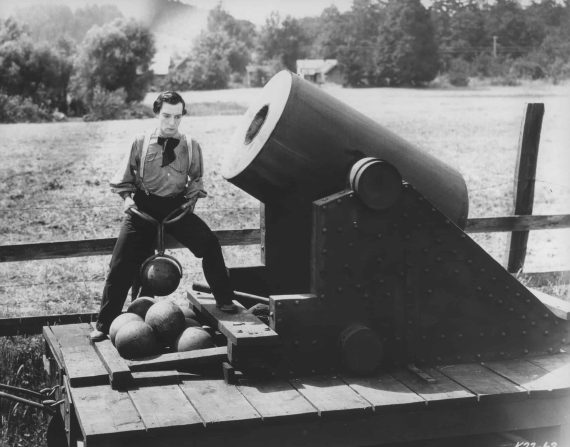 Watching it these 90-odd years since its release, The General feels less like an influential comedy and more like the birth of the modern action movie. After the first 15 minutes or so when the story is established and we get a few enjoyable comedy skits, the film hits the throttle and never slows down. There are countless train stunts, culminating in what is often considered the most expensive shot in silent cinema history, when a real train crashes through a burning bridge, into a river. With a battle scene following this, there are some pretty epic scenes of gunfire, explosions and all-out war too. Not what you’d expect from a Buster Keaton film.

That’s not to say the film is deadly serious though. It’s still a comedy, albeit an action-comedy, and Keaton once again proves he’s a master of physical humour. Even in the climactic showdown between the Union and Confederate soldiers, Keaton finds time for gags as his character tries to act the brave fighter, ending up accidentally taking out a sniper and attempting an iconic flag-holding pose before realising he’s stood on one of his superiors.

The General is also one of the most visually impressive films Keaton ever made. With plenty of camera movement utilised and attractive framing amidst the madness, on top of some excellent production design and the use of many real trains, it’s a fine piece of filmmaking on all counts. Keaton’s lead performance is superb too, showing how much he could do with his minimal stone-faced expressions.

All in all, it deserves the great praise it now receives. It may not be the funniest comedy ever made, but it’s certainly one of the greatest action movies. Endlessly exciting, genuinely dramatic, beautifully shot, packed with brilliantly conceived and daring stunts, and always infused with timeless comedy, it’s another work of genius from Buster Keaton.

The last film in this set (chronologically speaking) and the last Keaton made for United Artists, Steamboat Bill, Jr. sees him play the titular effete son of a burly steamboat captain (Ernest Torrence). The elder Bill hasn’t seen his son for years before Jr. arrives at River Junction to work with his father, at the request of his mother. Bill Sr. is ashamed to see that Jr. is wimpy, studious and musically inclined, so tries his best to set him ‘straight’. His efforts largely fail, but when Sr. gets into trouble through his rivalry with J.J. King (Tom McGuire), who owns half the town and has launched a fancy new steamboat, Jr. is forced to ‘man up’ and save his father. As an added twist to the tale, Jr. is in love with King’s daughter, Kitty (Marion Byron), a fact which neither father is happy about.

Steamboat Bill, Jr. is what I’d consider the most typical Buster Keaton film in the set. It focuses on the comedy, playing largely on the fish out of water aspects of Keaton’s character and Sr’s various failed attempts to toughen his son up. The gags all still work a charm too, even if for the most part they’re not quite as inventive as some in Sherlock Jr. 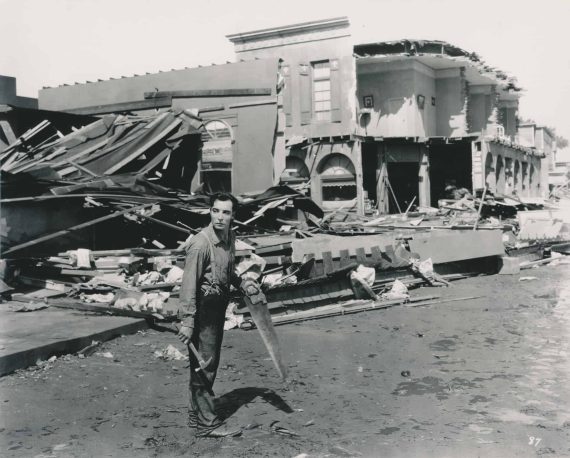 For a good two thirds or so of the film then, it seems like business as usual, pointing towards a title not quite as exemplary as the others in this set. However, it’s all capped off by an incredible final 20 minutes. A hurricane hits town whilst Jr. attempts to release his father from prison and this allows Keaton to show off some glorious physical comedy as he faces against the gale force winds (caused by airplane engines in reality) as well as some stunning practical effects and daring stunts. The most famous of these, and perhaps Keaton’s most famous stunt of all, comes when the whole side of a building falls on him, yet he is miraculously left unscathed as a window is neatly placed in the wall around him. If he stood mere inches off his mark, or if the rigged wall didn’t fall as planned, he could have been killed, as this was all done for real. The scene still astonishes, as does the whole final act.

So, whereas most of the film is ‘merely’ a decent example of Keaton’s expertise in silent comedy, the final third is a real tour de force, showing the absolute best of Keaton’s abilities. Unfortunately he never quite upheld this quality, as the film didn’t perform particularly well, resulting in his move to MGM, lack of directorial control and tumultuous personal life. Nevertheless, he left us with a near-unparalleled legacy of films from his glory days, three of the best of which are available here.

Buster Keaton: 3 Films is out now on Blu-Ray in the UK, released by Eureka as part of their Masters of Cinema series. The picture and audio quality is absolutely stunning, particularly for films of their age. They’re completely damage free and look magnificent when blown up on my projector screen. The accompanying scores (available in 5.1) are excellent too, although there are a couple of odd cues in the Steamboat Bill, Jr. soundtrack.

You get plenty of special features included to. Here’s the list:

It’s a huge amount of material and all worth while. Added to three fantastic films, it helps make this an absolutely essential purchase. It should be on top of every film fan’s Christmas list this year!