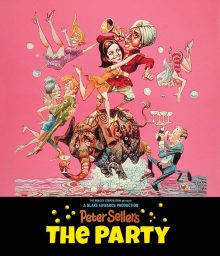 The Party is a film that has a strange personal relevance to me. I wasn’t sure if I’d seen it fully before watching this screener (although afterwards I felt pretty sure I had), but it’s a film I know best from some catchphrases (particularly “birdy num nums”) that my uncles used to quote with my dad. Due to this, I felt I had to take up the offer of reviewing the film, to better know this title that obviously had a big impact on my family.

The Party takes quite a simple premise and simply lets it play for the duration of its running time. Peter Sellers stars as Hrundi V. Bakshi, an Indian bit-part actor working in Hollywood whose clumsiness ruins a film shoot. The director (Herb Ellis) rings his producer Fred Clutterbuck (J. Edward McKinley) to ask him to make sure Hrundi never works in Hollywood again, but Clutterbuck’s secretary accidentally takes Hrundi’s name as being down to invite to the producer’s exclusive party. The bulk of the film takes place at this party where Hrundi gets into all manner of trouble and social faux pas, helping the gathering degenerate into chaos. During all of this, Hrundi falls for aspiring actress Michèle Monet (Longet), who’s also having a hard time at the party due to her rude and aggressive date.

Now, let’s get the elephant in the room out of the way before I go into what I thought of the film as a whole; Peter Sellers is ‘blacked up’ to play his Indian character. It’s a fact that will put many off this film and I can’t deny it makes it feel very ‘of its time’ and possibly quite offensive. I don’t want to argue this point too deeply, as it’s not my place to say whether or not it causes offence to any Indian viewers. The filmmakers interviewed in the special features claim it went down well over there, so perhaps not, plus the jokes derive largely from awkward situations anyone could get into rather than ridiculing the character himself. Hrundi, though occasionally clumsy, isn’t necessarily shown to be stupid and the jokes would still work if his character were white. However, that indicates the problem for me – why did he have to be Indian? You could argue that his skin colour and accent enhance the ‘fish-out-of-water’ aspect of his character, but couldn’t there be a different way to achieve this? 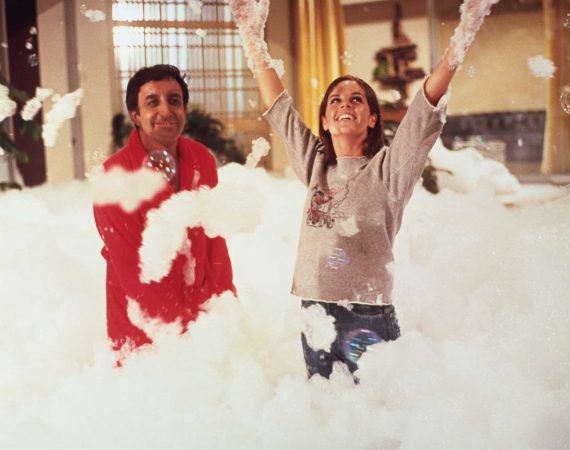 Another option to avoid issues would be to hire an Indian actor, but here is where I’d probably side with the filmmakers. I’m sure there are some great Indian comics out there, but Peter Sellers was a comedy genius and it would be mightily difficult to find someone as good as him of any race or nationality. He truly excels here too, delivering some of the finest physical comedy of his career. The film had a minimal script going into production, merely setting the scene and outlining the main plot points. The rest of the dialogue and activity was left up to the cast to improvise. Sellers was in his element due to this and it shows. Supposedly, director Blake Edwards hated working with Sellers after the first two Pink Panther movies and vowed never to work with him again, but Edwards knew Sellers was the best and possibly only man to pull off the unusual style of production he wanted to incorporate for his latest film.

As mentioned, a lot of the comedy comes from Hrundi’s social incompetence and the awkward situations he keeps ending up in. It foreshadows the sort of humour commonplace now in TV shows such as Curb Your Enthusiasm and The Office, whilst simultaneously tipping its hat towards classic silent comedy in the brilliantly timed sight gags prevalent in the film. Nearly 50 years on, the film remains incredibly funny. I watched it with my dad and we were both chuckling along throughout the film. From the dirty shoe fiasco near the beginning to the drunken waiter Levinson (Steve Franken), who steals scenes from Sellers at times, it’s a laugh riot throughout. 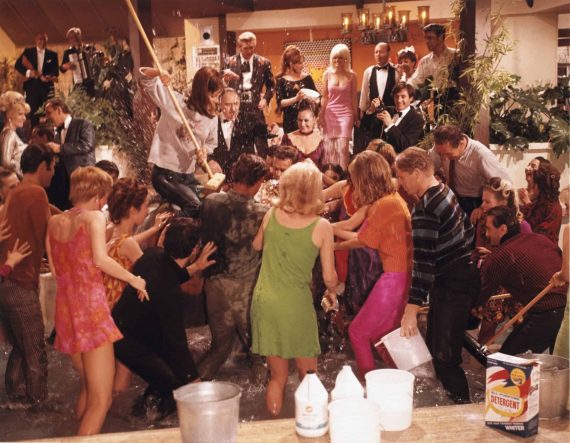 That said, the film does outstay its welcome a little as it goes on. The final act, when the party gets completely out of hand, is less successful than the earlier, more focussed comic scenes. I don’t think the simple premise was enough to take the film past 90 minutes. In particular, there’s a romantic coda that felt unnecessary and drawn out. There’s a shot where I was certain the film was ending, where Hrundi and Michèle are happily dancing in slow motion, but it carries on after this without adding much to proceedings.

So it’s not a perfect film, and the ‘black-faced’ lead character is hard to excuse, but if you accept it for what it is, The Party is a hugely enjoyable and uniquely simple showcase for one of the best actor-director comedy partnerships in the 20th Century.

The Party is out on 16th October on Blu-Ray in the UK, released by Eureka as part of their Eureka Classics series. The picture and audio quality are first rate.

There are a few special features included too. These are:

The two main pieces have a cheesy ’90s style to them, but the content is strong, offering an honest insight into the film’s production. I found The Party Revolution particularly interesting as it reveals how the film was surprisingly groundbreaking on a technical level as it helped introduce the modern video assist system, which is now commonplace in the industry.