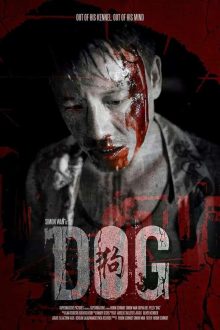 Every now and then I get sent screeners to review out of the blue or friends will pass on screeners to me that they think I’ll find interesting, and in order to help increase the profile of a short film by providing it with the chance of a second review on a different website. And that’s how I came by the film Dog, which is a ‘filmella’-length UK short.

‘Dog’ is a gangster’s henchman sent into situations to ‘clear’ properties or ‘bounce’ unwanted problems out of the boss’s hair. In a similar way to Jet Li in Unleashed, Dog isn’t the most subtle henchman on the block and basically uses his fists and feet to make his point rather than enter into any negotiating dialogue. In fact we first see him dealing with the problem of unwanted squatters using nothing but a chef’s ladle and lots of uber-violence. However, on this occasion, he decides to let some female migrant survive his onslaught, which in turn makes his boss somewhat displeased resulting in him being confined to the warehouse where this all happened until the boss calls him back – a kind of solitary confinement punishment, if you like.

It’s while he’s whiling away the time in this warehouse that he wakes one day to find a junkie hooker also sleeping in the building. She refuses to budge and when threatened offers to go and get supplies for him to make his enforced stay a little more comfortable. Suffice to say over time the two of them learn to tolerate and then to really like each other until things take a turn for the worse when the boss wants him back and the girl dead.

As you can tell by this plot description there’s not a lot to Dog and it’s not the most original story in the world, but it’s all done in such a heartfelt and stylish way that one can’t help but be impressed by this pretty street savvy short film, which was apparently Indiegogo backed, funding-wise.

Barring a few annoying Avid farts, and the casting of an actress (to play a hooker) who sounds far too posh to ever catch public transport let alone walk the streets, Dog is great example of independent filmmaking, which is full of passion and panache. The fights are pretty well staged, the characters are nicely (although nearly silently) drawn, the drama is touching and the musical score is appropriately sinister in places.

All in all Dog is definitely worth a look if you can find it; I’d certainly be interested in seeing what the filmmakers come up with next.