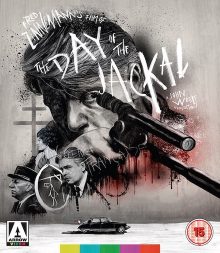 The Day of the Jackal is a film I haven’t seen since pre-DVD days when I had it on VHS. I saw it a couple of times back in the day and have fond memories of it, so I was more than pleased to hear Arrow announce they were giving it their thorough spit and polish treatment and unleashing it into the HD world.

Based on the bestselling novel by Frederick Forsyth of the same name, The Day of the Jackal tells of a fictional attempt in 1962 on the life of French President Charles de Gaulle. He had many detractors at the time (in reality) due to his handling of the Algerian War, so many failed assassination attempts were made, usually by the OAS (Organisation armée secrète – “an underground organization formed mainly from French military personnel supporting a French Algeria” according to Wikipedia). In the book/film, in a final bid to successfully kill the president, the OAS secretly hire a professional assassin known only as ‘The Jackal’ (Edward Fox) from overseas to do the job alone, so that informers/spies can’t put a stop to it as had been the case previously.

The film follows the Jackal’s careful work planning and implementing the assassination. This is intercut with the police efforts to find him. They call up “the best detective on the force”, Lebel (Michael Lonsdale), who works day and night to track down the Jackal with the help of his assistant Caron (a young Derek Jacobi).

Director Fred Zinnemann had an interesting and varied career, with several cast iron classics to his name, such as High Noon, From Here to Eternity and this, one of his last films as director. He’d been making films since the 30s, so by the 70s he was a consummate professional, or at least it seems this way in how he approaches the material. The film is a measured and thorough study of the work of both the Jackal and the police force. The attention to detail is almost fetishistic as we watch the Jackal head to a cemetery to find a suitable identity to assume, order a fake passport, figure out his disguise, etc.

This approach makes for a cold and chilling portrayal of killing as a job to do. Take away the fact that the Jackal is trying to murder someone, and what you’ve got is a two and a half hour film about someone at work away from home for a couple of weeks. However, a couple of murders, which are generally off screen but none-the-less disturbing, and a wonderful scene with a watermelon, remind us that his business isn’t what we’d describe as a ‘day at the office’.

As cold and calculated as much of the film is though, it remains utterly gripping. Despite its length, it’s tautly constructed, covering a lot of detail but never lingering on anything longer than required. In seeing how much work is involved in what the Jackal does, we find ourselves strangely drawn to his mission too, even though he is an emotionless machine of sorts.

This might largely be down to Fox’s extraordinary performance. He was a relative unknown at the time, but shot down any doubters with an icy performance that’s as controlled as the direction. Lonsdale makes a great counter to Fox too. We largely only see his character at work, as with the Jackal, but in showing a couple of scenes at home as well as the toll his job is having on him, the audience is allowed to empathise with him more easily. There’s a wonderful scene after he’s discovered The Jackal’s identity when his wife can’t wake him up as he’s sleeping so deeply. There are some wonderful minor performances too, such as Cyril Cusack, who provides the Jackal with a handmade gun.

Overall, it’s a cold, clinical study of a killer at work and the huge efforts made to stop him. It’s very hard to fault as it methodically goes about its business. It’s long and short on action, but gripping due to its disturbingly detailed approach and a lead character that holds his cards tightly to his chest. Quite simply, it’s one of the finest thrillers ever made.

The Day of the Jackal is out now on Blu-Ray in the UK, released by Arrow Video (surprisingly – I’d have thought this would be an Academy title). The picture and sound quality are superb.

It’s not a lot of material, but the Sinyard interview goes pretty in-depth so the quality is there, if not the quantity. The archive material is short, but provides some interesting glimpses at the production process as well as brief thoughts from Zinnemann himself.