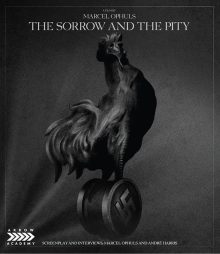 Choosing to request a copy of the documentary The Sorrow and the Pity to review was a case of feeling I should watch the film rather than me wanting to watch it. The title for starters doesn’t suggest you’re in for an easy night in front of the TV. Then you’ve got the length. At a little over four hours, it’s a hefty slab of documentary and not easy to get through in one go (I watched it over 3 nights, but only because I was far too tired to concentrate the first night – 2 would have been fine and the film is split in 2 parts to accommodate this). Nonetheless, I’d heard it often called one of the greatest documentaries ever made so, being a fan of the genre, I felt I ought to have seen the film, so I semi-reluctantly asked for a copy.

What also didn’t help my low level of enthusiasm was that I thought the film was about the Holocaust, which doesn’t make for easy viewing and is a subject that has been well covered elsewhere (particularly in the even lengthier Shoah). However, I was misinformed (or rather hadn’t read into it properly). The film is about France during WWII, so the Holocaust does feature and much time is spent on the subject of the Nazi’s anti-semitism. The core subject matter however, is the examination of Germany’s occupation of France between 1940 and 1944. Once I realised this was the case (shortly before finally putting the film on), I became less reluctant to watch it. A lot of films and documentaries have covered WWII and various aspects of the war over the decades that followed. However, other than Casablanca and the TV series ‘Allo ‘Allo, which are hardly documentaries or even ‘based on true events’ for that matter, I’ve personally never seen the occupation covered in much detail on film. 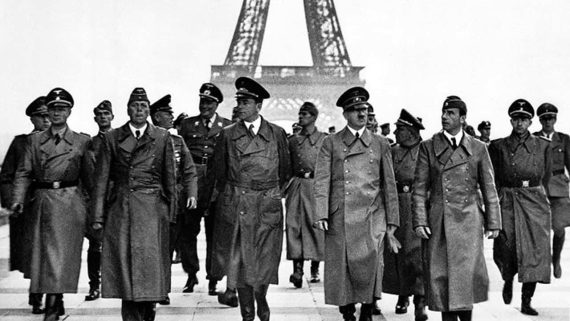 The Sorrow and the Pity certainly makes up for that. Not only is the running time extensive, the volume of information and pace at which it is delivered is rather dense. As such, it demands your full attention and isn’t an easy watch. Director Marcel Ophüls interviews a huge range of people, from important heads of branches of the Resistance and Liberation movements, to German aristocrats, to simple folk living in amongst the turmoil. Few stones are left unturned and it makes for an incredibly rich and fascinating watch.

Ophüls’ questions are often very probing too. He wasn’t afraid to dig into the important issues and the darker sides of what was going on, even though the events were only 20-odd years in the past at the time of filming. The film is not a triumphant celebration of the strong will of the French people in gaining their freedom either. We hear much about how the arrival of the Nazis brought out racist attitudes some Frenchmen had previously hidden away. A large portion of the country were swept up in the Nazi propaganda too and due to the Germans seemingly improving life in the country in a few ways, they had more supporters than you’d imagine. Due to this unvarnished image of the French people, The Sorrow and the Pity was banned from French television until 1981. 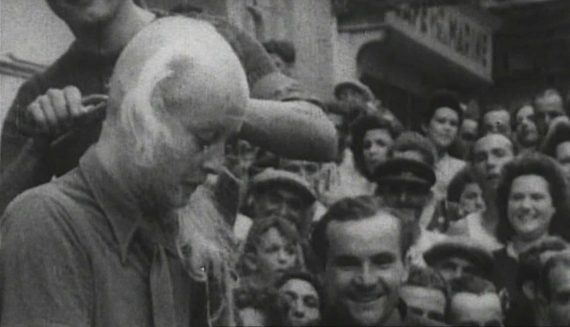 Away from the subject matter, the film’s presentation isn’t anything to shout home about, at least in terms of cinematography. The interviews are fairly rough and ready, shot on black and white film. Much of the running time is made up of archive material though and there’s a wealth of this on display. Ophüls uses it very effectively too and not without some black humour. For instance there’s an amusing period advert for spray on tights – a money saver for glamorous ladies in tough times. There’s an ironic montage too that has a jaunty song about loving “the smell of France” whilst we see shots of Frenchmen doing Heil Hitler salutes. The interviews often take place in cleverly chosen locations too, framing them against the then present day state of affairs. For instance, a Brit is interviewed inside a bomber and at the end of the interview we pull out to reveal the plane is now part of a museum exhibit.

So The Sorrow and the Pity ended up being far from the slow, dull and depressing watch I expected. It’s an incredibly rich and detailed study of a troubled and complex period of history. It’s dense, long and tough to take in all at once, but it’s fascinating, brave and powerful, so absolutely worth the effort. I’m certainly glad I decided to take the plunge after being initially so hesitant.

The Sorrow and the Pity is out now on Blu-Ray and DVD in the UK, released by Arrow Academy. I saw the DVD version and the picture and sound quality was decent enough, although it’s hard to tell when a lot of the footage on screen is archive material of varying quality.

– Interview with director Marcel Ophuls, filmed in 2004
– Le Nouveau Vendredi: The Sorrow and the Pity, a 55-minute debate that followed the film’s belated 1981 French television premiere, in which Ophuls and historians Henri Amouroux and Alain Guérin discuss the film and the issues that it raises with an audience of students from Clermont-Ferrand
– Reversible sleeve featuring new and original artwork
– FIRST PRESSING ONLY: Booklet featuring writing on the film by Pauline Kael and Jean-Pierre Melville, plus extensive historical context.

It isn’t a huge amount of supplementary material, but it’s of a high standard and perfectly complements the film. The interview with Ophuls is surprisingly entertaining too as he’s a sharp and witty speaker.