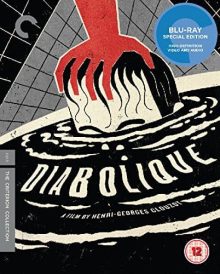 Diabolique seems an odd film for Criterion to choose to release in the UK as part of their collection of exquisite Blu-Ray re-releases of classic films. That’s not to say Diabolique doesn’t deserve to be part of the Criterion Collection. It’s a highly respected film from an equally respected director. However, another boutique Blu-Ray label, Arrow Academy, turned their hand to it only three years ago (albeit under the film’s alternative title, Les Diaboliques). I haven’t actually watched that release, so can’t compare, but knowing Arrow’s reputation, it’s probably equally as well remastered and seems to have a couple of equally as decent special features included. Nevertheless, it’s a film worthy of attention and I’d not seen it for a few years, so I didn’t hesitate to request a copy to review for you all here.

In Diabolique, Christina (Véra Clouzot) and Nicole (Simone Signoret) are an unlikely pair who plot to kill Christina’s husband, a cruel headmaster named Michel (Paul Meurisse). They’re an odd couple because Nicole was Michel’s mistress and Christina is perfectly aware of this. The twisted Michel makes no secret of it and this, on top of his constant belittling and humiliation of Christina, drive the women to the drastic measure of committing murder. Their plan, driven largely by the cold and calculated Nicole, seems to go relatively smoothly until Michel’s body goes missing. As Christina’s fear of being caught builds on top of her mounting guilt, her sanity and already weak heart are tested to their limits.

* VAGUE SPOILERS IN THIS PARAGRAPH * It’s a hugely influential film for numerous reasons. Murder plots had been portrayed on the big screen before, but this is one of the earliest examples of a film being turned on its head by a final twist. In fact, my decision to mark this paragraph as containing ‘spoilers’ is inspired by the fact that the film contains one of the earliest examples of an anti-spoiler message at the end, asking the audience not to reveal the twist to anyone who hadn’t seen the film. It’s a device Alfred Hitchcock borrowed for Psycho a few years later. In fact, Hitchcock borrowed a lot from Diabolique when making his classic proto-slasher. Both films make repeated use of water and bathrooms for pivotal scenes for instance. Both feature twists too, particularly those involving their protagonists. I won’t knock Psycho as it’s one of my favourite films, but it’s clear Hitchcock saw Diabolique and took notes. It’s thought that the British director was jealous or at least concerned about Clouzot’s growing reputation as the new master of suspense after Wages of Fear and Diabolique received much acclaim and financial success around the world. * END OF SPOILERS *

Often films deemed ‘influential’ are merely interesting historical documents after a couple of decades of homages, copycats and straight up remakes (Diabolique was remade 3 times) have overused their tropes. However, Diabolique remains a gripping and highly effective thriller. The tension is slowly ratcheted up from the start to the still shocking finale. Speaking of which, the climax to this film is truly one of horror cinema’s creepiest scenes. I can’t say too much without spoiling the film, but it’s an image that’s guaranteed to haunt you for a long time after watching. The earlier murder and subsequent shots of the body are still pretty grim too. The horrific act of what the women have done is played out largely in real time and isn’t glossed over, even if Michel is made out to be a true monster who might deserve to die. This helps create a moral complexity to the film that elevates it above a mere shock thriller. The ever-increasing guilt felt by Christina and its embodiment through images of the murky school swimming pool reminded me of Edgar Allan Poe’s ‘The Tell-Tale Heart’ too.

The film is also impressive on a technical level, with some expertly staged sequences. In particular I loved the scene where Christina is supposed to poison her husband and the camera keeps the poisoned bottle near-constantly in shot. It’s always just out of focus or off centre enough to not feel blunt, but ever there nonetheless. As the couple argue, the audience is regularly reminded of what’s lying beneath the surface of their conversation – in her mind, Christina is swinging from calling off the murder to nearly pouring the drink down his throat. 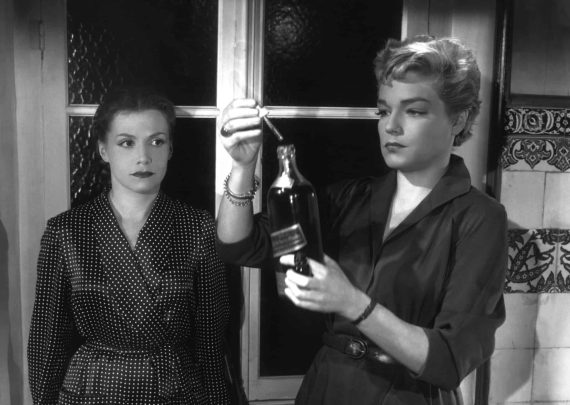 The story is told quite economically too, with little added fluff to get in the way of the central arc. Clouzot doesn’t rush through it all though. He knows to hold back and let the scenes become almost unbearably tense as they slowly unfold.

It’s an expertly crafted tale of the evil in man (and woman) and the true cost of guilt. Gripping and tense from start to finish, it’s truly one of the finest thrillers ever made, so deserves two fine Blu-Ray releases.

Diabolique is out now on Blu-Ray in the UK, released by The Criterion Collection. The picture and sound quality is very good. The picture is often a bit soft, but I imagine this is down to the source material. The dynamic range is high though, allowing for rich textures. Audio is solid throughout too.

You get a fair amount of special features. Here’s the list:

It’s not a particularly lengthy collection of material, but everything here is of a high standard and helps enrich the viewing experience. In particular, the featurettes help you appreciate just how influential and ahead of its time the film was.