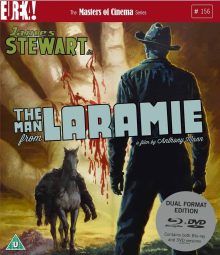 I’ve talked before about my love of the western genre and how my adoration only truly kicked into gear a few years ago. One of the titles that spurred on (pun intended) this more recent fandom was Winchester ’73. The first collaboration between director Anthony Mann and star James Stewart, it used a clever narrative device (the ownership of the titular gun) and was lean, thoroughly engrossing and exciting. Knowing that the pair made four more films together following this, all of which are highly regarded, I’ve been keen to work my way through them. Hearing 1955’s The Man From Laramie often called the best of these, it was at the top of my list. Somehow it’s taken me a couple of years to actually get around to it though and I’m glad I waited, because it allowed my first viewing to be Eureka’s new Masters of Cinema Blu-Ray release of the film.

The Man From Laramie sees Will Lockhart (Stewart) arrive in Coronado with his wagon freight of goods. After dropping them off at the local store he heads with his crew to stock up on salt to take something on to the next town. However, he falls foul of Dave Waggoman (Alex Nicol) who owns the salt flats and punishes Will overly severely, humiliating him and destroying his livelihood. The unhinged Dave is stopped from going even further by his surrogate brother Vic Hansbro (Arthur Kennedy), but that’s not enough to prevent Will from seeking revenge. As the film moves on, we realise there’s more to Will’s presence in town than delivering freight though and his desire for revenge stretches further than saving face against Dave. A group of cavalrymen, including his brother, had been murdered by the Apache, who used repeating rifles clearly sold to them by ‘white men’. So against the opinion of those around him, Will sticks around Coronado to seek his own brand of justice against those responsible.

Alongside this, the film examines the relationship between Dave, Vic and Dave’s father Alec (Donald Crisp) who owns most of Coronado and the land surrounding it. The ageing Alec is priming his son to take over the ranch, but he isn’t ready yet, so Vic currently runs things. Vic feels like he deserves to become the owner though as he’s put more work in, but Dave is Alec’s blood. So their relationship is very strained and Will’s interference helps fuel further disagreement between the feuding men. 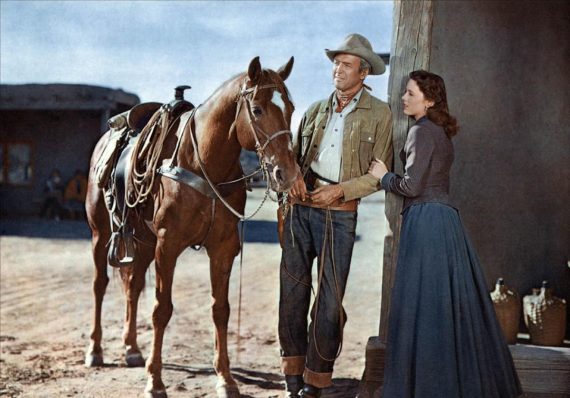 My synopsis doesn’t even include a couple of important female characters, Dave’s cousin Barbara (Cathy O’Donnell) and neighbouring rancher Kate Canaday (Aline MacMahon), so you can see that there is a lot more going on here than in your typical western. Mann was one of the classic directors of the ‘psychological western’, films that had more internal conflict than external. Although there are gunfights and violence here and there, it’s what’s going on inside the minds of those involved that drive the film. There are no real heroes or villains here either. Although Will and Dave are pretty close to these, they still have their flaws and reasoning behind their actions.

What The Man From Laramie does very well is effortlessly juggle the narrative and psychological complexities without dragging things out or creating a mess. Elements of the story are constantly held back, meaning there are little twists cropping up throughout, creating a hugely compelling experience. There’s a dark edge to proceedings that I appreciated too, with a couple of wince-inducingly brutal moments to keep the film from getting soapy. 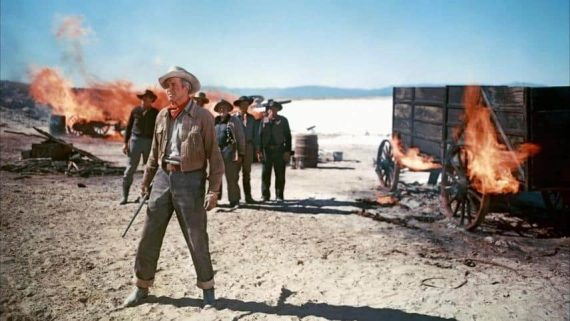 It fell a little short of Winchester ’73 though in my books I’m afraid to say, although that might be down to the hype I built for it in my mind. For one, although the storytelling was one of the film’s strongest points, I still felt it could have lost a strand or two to create a leaner experience. The love triangle between Will, Barbara and Vic for instance never quite lifts off, so I felt it could have been cut entirely. I also wasn’t a fan of Crisp as Alec. He was a little wooden compared to the likes of Stewart and Kennedy, who bring their A-game.

On the whole though, this is a richly textured oater with just enough bite to satisfy fans of the guns-a-blazing westerns. It didn’t quite live up to my very high expectations, but I still liked it a lot and look forward to the two remaining Mann/Stewart western collaborations I haven’t seen.

The Man From Laramie is out now on Dual Format DVD & Blu-Ray in the UK, released by Eureka as part of their Masters of Cinema series. The picture and audio quality is very good. The print is clean and richly coloured.

Only two features looks light on paper, but a commentary is always good value, particularly from the ever reliable Adrian Martin and the Kim Newman interview is very well researched and interesting too. As ever with Masters of Cinema, the booklet is also a highly recommended read.