I think I’ve mentioned this in a review before, but I’m not the biggest fan of musicals. I love music and love films, but putting them together too blatantly doesn’t always work for me. I think it’s mainly the stereotypical squeaky clean Rodgers and Hammerstein style that I don’t go for though as there are a couple of musicals I truly adore. Singin’ in the Rain is one of them and another is Little Shop of Horrors. The more often I watch it, the more I come to feel it’s my favourite musical. Yet it’s a film that’s largely only ever been available to watch in a form not originally intended by its director. Frank Oz’s Little Shop of Horrors was written and first shot with a particularly downbeat ending in line with the original short story, non-musical Roger Corman film and off-Broadway stage version. However, the bleak finale didn’t go down well with test audiences and the producers forced Oz to re-edit and reshoot the ending to be much more sugary.

Now I’ve never had a problem with the happy ending I’d seen several times previously, even though I was aware of how it originally concluded. Nevertheless, I was always intrigued to see Oz’s intended version of the film and my wish has been granted by Warner Bros. Home Entertainment who have released Little Shop of Horrors in a Premium Collection version, complete with the director’s cut, which is what I chose to watch for this review. 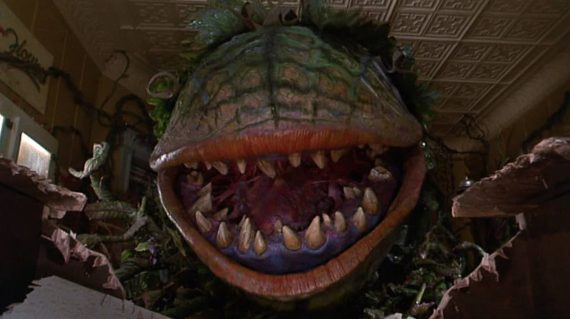 For those who haven’t had the pleasure to see Little Shop of Horrors, it tells the story of Seymour (Rick Moranis), a lowly flower shop assistant living in Skid Row. He comes across an unusual plant which appears during a solar eclipse. As the flower shop is struggling to stay afloat, he tries putting the plant (which he names Audrey II after his beloved co-worker Audrey, played by Ellen Greene) in the window to attract passers by. It indeed proves quite a draw, but the plant looks to be on its last legs. Seymour tries plant food, water, light – all the usual things that plants need to grow, but nothing revives it. That is until he pricks his finger and discovers the one thing the plant thrives on is blood (preferably human). The more blood Seymour gives it from his fingers, the larger it grows. Once Audrey II gets bigger though it craves something more substantial. Now he is enjoying fame and fortune and the attentions of Audrey, Seymour is forced to find whole human victims for the manipulative plant (who talks by this stage), leading him into a whole mess of trouble.

The film works a charm for me on all levels. Most importantly, being a musical, the songs are fantastic. Pretty much all of the tunes are catchy, hugely memorable and all together quite diverse, borrowing from various popular styles of the era (the late 50’s/early 60’s). Kicking off the film is the wonderfully staged big number ‘Skid Row (Downtown)’, which shows Oz as a dab hand for putting together a classic Hollywood musical extravaganza, but with the lyrics and setting focusing on the lower rungs of society. There are a handful of hugely entertaining tracks such as ‘Dentist’ and ‘Mean Green Mother From Outerspace’ too, but I also love the film’s two ballads. There’s the wonderfully sweet ‘Somewhere That’s Green’ and the belter ‘Suddenly Seymour’, where Ellen Greene gets a chance to show off her impressive vocal capabilities. 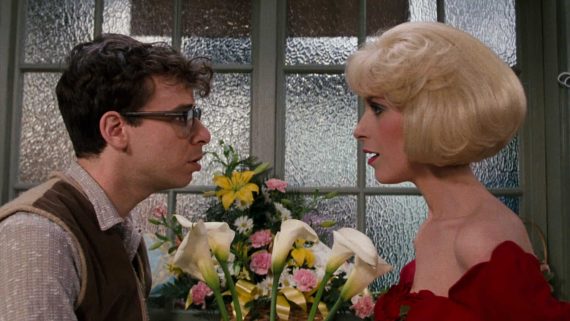 Speaking of Greene, she’s a hugely underrated actress who never quite became a household name (although I believe she’s enjoyed a strong career in the theatre – she originally played Audrey in the stage show). Her comic timing and cute vocal quirks in and out of the songs are perfect, turning a ‘dumb blonde’ character into a hugely lovable one, who you’re desperate to get together with Seymour. Moranis matches this too, maybe not vocally, but certainly in terms of delivering an immensely likeable lead, despite his character’s actions. Supporting the protagonists are a smattering of 80’s comedy megastars, with Steve Martin and Bill Murray particularly standing out as a sadistic dentist and his masochistic patient respectively.

I love every minute of it as you might have gathered. The black comedy, the loving nods to the horror and musical genres, the music, the performances etc. So, what did I think about the newly reinstated ending? I’m pleased to say it improves on an already fantastic film. Knowing what would be different going in to watching the director’s cut, I was worried the intended final act would put too much of a downer on the fun leading up to it, but it works perfectly, delivering a surprisingly poignant climax followed by an epically apocalyptic yet satire-tinged final coda. It’s much more powerful than the syrupy studio-endorsed ending, although I still enjoy seeing everything get tied up nicely there.

So Little Shop of Horrors not only remains one of my firm favourites, it’s somehow been made even better in this new (or old I guess) form. I couldn’t recommend it highly enough. 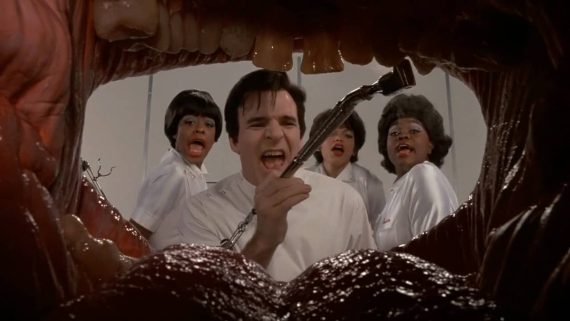 Little Shop of Horrors has been re-released by Warner Bros. Home Entertainment in a Blu-Ray, DVD & Digital HD/UV package as part of their new Premium Collection, sold exclusively at HMV. I saw the Blu-Ray version and the picture and sound quality are both fantastic.

Although having the original ending reinstated is new to any UK home release, most of the features are taken from an older DVD version of the theatrical cut, so don’t expect too many new extras. These older features are not to be scoffed at though. The theatrical version commentary is great, with plenty of interesting facts about the production and much praise for those involved. The documentary is decent too, despite its cheesy presentation, and looks at the history behind the film as well as its production, bringing in Roger Corman to talk about his original film version. The 10 minute piece about the director’s cut is well worth a watch too.