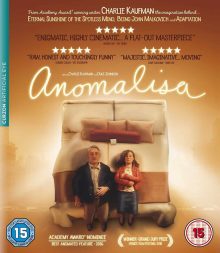 A huge proportion of my reviews here are from first time watches because it takes time and effort to write and publish a review and my only ‘payment’ is a free screening copy of the film. If I’ve already seen the said film, particularly recently, the reward seems less worthwhile, so I tend to pass those offers up. There are exceptions though. I saw Anomalisa at the cinema little over two months ago, but when the generous folk at Curzon Artificial Eye asked if I’d like a copy to review, I found it hard to say no. So I didn’t. For one, I liked Anomalisa a lot, but it’s also a film I was desperate to see again and believe it’s the sort that will benefit from repeated viewings.

Anomalisa follows Michael Stone (David Thewlis), a customer services expert who has travelled to Cincinnati to give a presentation. We soon learn that he has been here before 11 years ago, when he up and left his girlfriend with no warning or reason. Although now married to someone else with a young son, he’s still torn up about what he did back then, on top of being stuck in an existential funk. This depression and isolation is deepened and brought to physical life by the fact that everyone in the world other than him share the same voice and face. Men, women and children are all voiced by character actor Tom Noonan and have the same bland, smooth features. Whether anyone else in the world can see this isn’t clear (although Stone seems to be a bit of a celebrity), but the fact is that Stone sees and hears things this way, which makes him perpetually disturbed and fed up of everything outside his head.

After a shambolic attempt at reconciling with his ex-girlfriend however, Stone comes across Lisa (Jennifer Jason Leigh), a telesales woman who’s come for the presentation with her colleague and the first person he’s met who actually has a different voice and face to the rest of the world. Stone falls instantly in love and the two share a special evening together, but what will happen tomorrow? 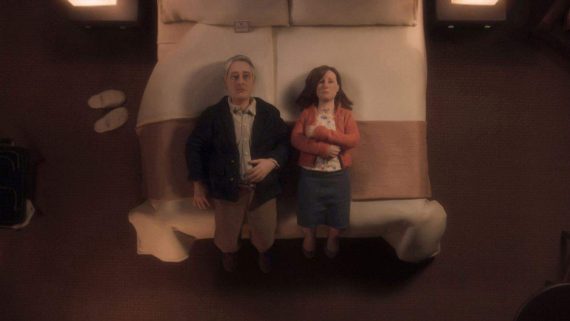 As is to be expected from a film written and directed by Charlie Kaufman, Anomalisa is an incredibly unique film, not least in the chosen format for such an adult drama. His first foray into animation (which is likely why it was co-directed by Duke Johnson), using stop motion techniques, the facial expressions of characters are captured not by manipulating mouths and eyes frame by frame, but by replacing the top and bottom half of the face with alternative expressions scanned from real life actors and printed using 3D printers. This allows for some wonderfully subtle and natural ‘performances’ from the puppets. Interestingly, Kaufman and Johnson decide not to hide the seams on the faces though (usually done using CGI these days). There’s even a scene where Stone’s jaw comes off to reveal the workings beneath. They want people to be aware that this is stop motion animated as they watch and it plays a part in adding to Stone’s disturbing view of the world where people are becoming bland facsimiles of each other.

Using a single voice actor for all the characters surrounding the two protagonists is probably the most unusual curveball the film throws at us though. I must admit, on the first viewing, it took me about 10 minutes to realise this and I found it a bit distracting for a while, until Lisa turns up. On second viewing I’m surprised it took me so long and it’s far less distracting because you know where they’re going with it. It’s vital to the story of course, so isn’t a mere gimmick and it certainly gets under your skin and helps the audience appreciate the breath of fresh air when Lisa arrives. The choice of voice actor is great too. Noonan has a smooth voice that is equally harmless and chilling due to its lack of rough edges.

Beyond the eye-opening surreal flourishes, the film delivers most effectively through being surprisingly human. Despite all the up-front puppetry and bizarre world that’s been created, Stone and Lisa feel undeniably real. You sympathise with Stone’s disillusionment, partly through our ability to hear and see like he does, but also because the mundanities of life that he’s fed up with are perfectly realised and satirized. A taxi ride with a frustratingly inane driver sows this seed brilliantly at the start. The relationship between Stone and Lisa is warmly and believably portrayed too. Lisa isn’t perfect, she’s ditzy and talks too much, but she has character and that’s what matters to Michael. The greatest achievement the film pulls off with regards to the couple though is in crafting one of the most realistically awkward yet beautiful sex scenes I’ve ever seen – animated or otherwise.

I do have one problem with the film, which I hoped would be lessened on a second viewing, but it wasn’t. I find the third act a bit rushed. I don’t want to spoil what happens, so I won’t go into too much detail, but I felt the decision made on the relationship seems to happen a little too quickly so it’s hard to accept and makes the ending feel rather abrupt.

Generally the film is astonishing though. It’s unique, funny, thought provoking, moving and visually inventive whilst maintaining a warmth and humanity despite the style and occasional flights of fancy.

Anomalisa is out on 11th July on Blu-Ray and DVD in the UK, released by Curzon Artificial Eye. I saw the Blu-ray version and the film looks and sounds great.

The featurettes are disappointingly short (the 13 videos make a combined total of 9 minutes), but are still well worth a watch. The Q&A is lengthier and makes for a worthy addition.