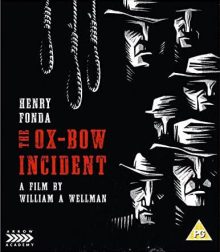 Back in the early days of Hollywood, up to the end of the 30’s, the western was primarily a B-movie genre. They tended to be cheap, throwaway bits of fun with a clean cut hero saving the girl or town from outlaws or Native Americans. Films like John Ford’s Stagecoach brought them out of the shadows though and they started to be big business, even if they were still fairly straight forward in terms of plot. William A. Wellman’s The Ox-Bow Incident in 1943 helped usher in a new era though. Bringing in darker themes, mirroring modern issues in this period setting, the film is thought to have been the first ‘psychological western’. It didn’t make much money at the box-office, but The Ox-Bow Incident received critical acclaim and helped pave the way for films that took ideas and storylines from film noir and transposed them to the wild west. Examples of this can be seen in Station West in 1948 and The Furies in 1950.

The Ox-Bow Incident opens with two cowboys, Gill Carter (Henry Fonda) and Art Croft (Harry Morgan), riding into the quiet Nevada town of Bridger’s Wells. They enter the local saloon and hear from local ranchers that there have been a spate of incidents of cattle-rustling recently and the culprits are still at large. After a bit of a drunken dust-up between Carter and one of the locals, a rider rushes into town to say that one of the townsfolk has been murdered and his cattle stolen. It seems clear which way the killer/s will be travelling, so the local men (and one not-so-feminine woman named Ma) come together to form a lynch mob to chase him down and put him to their own brand of ‘justice’. The local judge (Matt Briggs) and a good man named Arthur Davies (Harry Davenport) think the matter should be handled through the courts, but the mob won’t listen. Davies joins the group to try and steer them away from anything drastic, as do Carter and Croft, although they might only be joining to avoid any blame being put on them, being outsiders. Also joining the mob is ‘Major’ Tetley (Frank Conroy) and his soft-hearted, possibly homosexual son Gerald (William Eythe), who is being dragged along by his father to “make him a man”.

On the trail, the group comes across three out-of-towners; a Mexican named Juan Martínez (Anthony Quinn), a not-all-there old man named Alva Hardwicke (Francis Ford – brother of John Ford) and a well spoken, seemingly level headed young man named Donald Martin (Dana Andrews). A number of ‘coincidences’ strongly suggest that this trio are to blame for the murder, so the mob set about getting them strung up. Davies meanwhile continues to try to convince the angry townspeople to take them to the authorities instead, particularly as they continue to plead their innocence. Carter thinks the men deserve a fighting chance too, but keeps quiet as long as he can. Can a 12 Angry Men style debate subdue the red mist from the eyes of the accusers, or are the three outsiders doomed?

This is a strikingly dark, unflinching and powerful film. Not just for the time, but still to this day. It may be a morality play that wears its message on its sleeve, but the message remains an important one and the events that unfold are horrifyingly believable. The fact that lynchings were prevalent in the country only a couple of decades previously casts a disturbing shadow over proceedings. The special features describe how Fonda even witnessed one for himself when he was a young boy, so the role must have been especially important to him.

Being the first so called ‘psychological western’, the film is low on the usual genre tropes such as gunfights and bar room brawls (although there is a brief, brutal fight in the bar at the start). Instead it’s very dialogue heavy. This may sound like a turn-off to many, but the film remains as tense as any stand-off or barn siege because the fate of the three men is constantly on a knife edge. The dialogue is intelligent and fluid too. It makes you think and take notice, but doesn’t sound too scripted, although by modern standards it’s maybe not 100% natural. 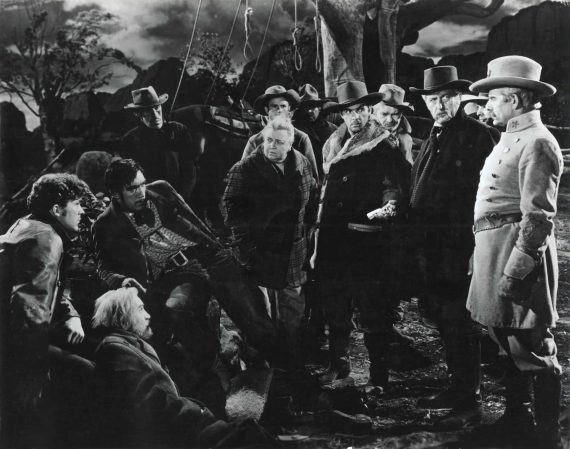 I had a couple of minor quibbles. There’s a subplot about Carter looking for a woman he loves called Rose (Mary Beth Hughes), who he soon bumps into along the trail, only to discover she’s now married to a rich, slippery character called Swanson (George Meeker). The trouble is, once she appears, she promptly disappears again and isn’t referred to anymore, which I found odd and rendered the thread pointless. Also, there’s an over-convenient sudden appearance of an important character at the end which was a little clunky.

However, these barely detracted from what is otherwise an incredibly powerful and ground-breaking film. This is where the western grew up and people (or the critics at least) took notice. It’s a gripping and disturbing indictment of mob justice which remains relevant 73 years later.

The Ox-Bow Incident is out now on dual format Blu-Ray and DVD in the UK, released by Arrow Academy. I saw the Blu-Ray version and the picture and sound quality was very good. The picture isn’t quite as sharp or detailed as some remastered film transfers I’ve seen, but it’s still impressive for a film of its age.

The commentary by Etulain and Wellman Jr is great, filling you in on all the history behind the film and differences between it and the source novel. Stanfield’s selected-scene commentary is more academic, but no less worthwhile. His introduction is highly informative too. The Fonda documentary, although a little dated in presentation, is my favourite of the extras though. It gives a thorough account of the actor’s life behind and in front of the camera (other than the glaring omission my favourite film, Once Upon a Time in the West) and actually got me quite emotional at the end when his kids Jane and Peter talk about their final months with their father.

The booklet is worth a read too, as always, topping off a must-buy package.