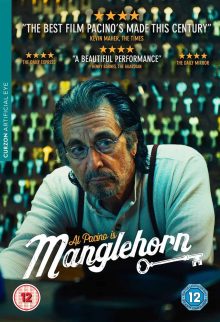 Al Pacino is on understated form in this low-key drama playing the melancholic Mangelhorn, a locksmith in the twilight of his career. We first see him bathed in a nightmarish green hued light and surrounded by hundreds of keys in his small premises, whilst a sorrowful voice-over laments a lost love. A light goes out and Mangelhorn mechanically changes it. He’s a man who has lost his way, lost any spark for life he once had, and although he undoubtedly has the key to make a change he seems unwilling to act. He wallows in his own misery, joylessly feeding small change into a one armed bandit or undertaking the duties of his locksmith business; a misanthrope who only becomes human around his cat.

One ray of human sunshine in his life is a bank teller called Dawn, with whom he engages in what passes as bonhomie every Friday. In these exchanges his innate goodness shines through and there appears to be a genuine connection and the promise of redemption. The other ray of sunshine is his granddaughter who he appears to see regularly despite strained relations with his son. As we get to know Mangelhorn we learn of his more sociable past; how he coached his son’s football team and was well liked and even mythologised as having magical powers. However it appears that this might have been the catalyst for the rupture with his son, who wasn’t as good as his peers in sport. 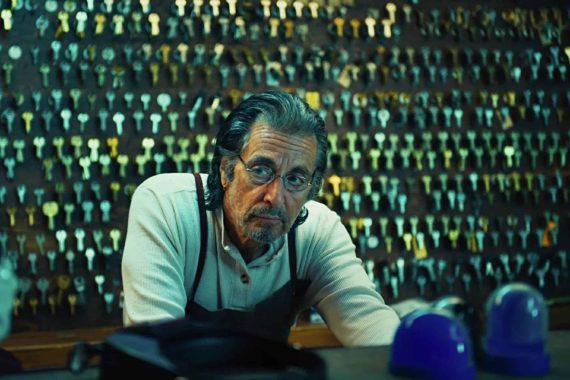 The film has a dream like quality at times, with Pacino’s soporific voice-over musings interspersed with woozy montages, evoking Mangelhorn’s state of mind. He’s drifting through life, mechanically existing in the present but living in the past. When he has the chance for happiness in the here and now he actively seeks to wreck it, crushing the likeable perkiness of Dawn in an excruciating date. She’s the antithesis of Mangelhorn; bright, optimistic and emotionally honest. Will this be enough for his salvation?

Mangelhorn the film is much like Mangelhorn the eponymous character; by turns infuriating and annoying but ultimately affecting and magical.

Mangelhorn is out now on DVD and Blu-Ray in the UK, released by Curzon Artificial Eye.