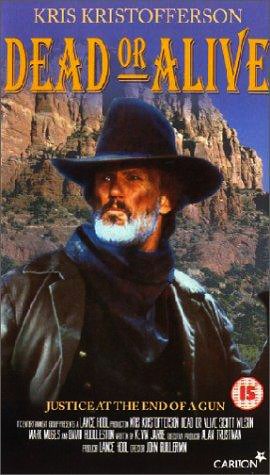 This made for cable (HBO) western from back in the late 80s is tough as nails and features sterling work from stars Kris Kristofferson and Scott Wilson. Kristofferson plays Nobel Adams a retired tracker living the quiet life out on the range with his wife. Welcoming home his son Tom (Mark Moses) from university he’s glad to have his family all back in one place. However, the quiet life is soon disrupted when his old partner Lane (Huddleston) comes a calling asking for his aid in hunting down the just-escaped-from-prison Red Jack (Wilson). Blinded by religious fanaticism, Red Jack and his crew tear across the West killing whoever is in their path, kidnapping a young girl and her ward along the way.  Nobel, along with Tom, agree to help and a brutal pursuit across the plains ensues as the group of trackers face one of their toughest track downs.

While it may have a slight made-for-TV feel don’t let this put you off as Dead or Alive is one tough western and features many a cinematic vista. The last film helmed by John Guillermin (The Towering Inferno) the assured direction, great cast and violent action all add up to a great western. Written by Kevin Jarre (who would go to pen Glory and Tombstone) the film is much more than just a run, chase and shoot western. The father and son relationship between Nobel and Tom is also front and centre as the educated Tom (along for the ride for the first time) discovers the harsh realities of the prairie and that his father has a much darker side than he was aware of. Nobel must also deal with the fact he may have to commit certain violent acts, far removed from his University learning, in order to survive. This adds an extra layer to proceedings as the trackers are far from perfect heroes and must dive to some deep depths in order to capture the rampaging evil they’re pursuing. 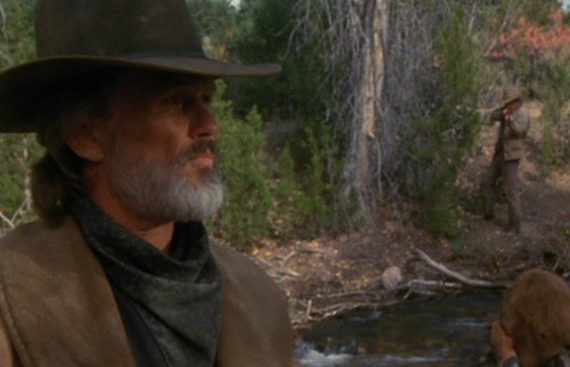 The film trips over into gothic territory as the merciless, God-touting Red Jack is one dark bad guy. Not least in the unhealthy attachment he forms with the young girl he’s kidnapped and the ruthlessness which he and his men kill. While first and foremost a rough and tough western, Dead or Alive has some dark undertones that gives it an extra edge. Wilson is fantastic as the deranged Red Jack, Kristofferson gives his gruff tough best and mention should also go to Celia Xavier and Jennifer Snyder who give strong performances as the kidnapped women.

There are few moments when the tight grip and dark tones slip in favour of a bit of cheesiness, but this does not derail proceedings thanks to Guillermin’s direction, some solid action and a sense of unease that permeates the film. If your love of westerns starts and stops with the likes of Unforgiven and The Magnificent Seven (both great films no doubt!) then step of the beaten western trail and check out Dead or Alive. There are hundreds of westerns out there besides the known classics, worthy of discovery and Dead or Alive is a good start.

Resurrect on Blu-Ray: there’s several out of print DVDs out there but otherwise give this the full Blu Ray treatment.

Trailers on tape: None.