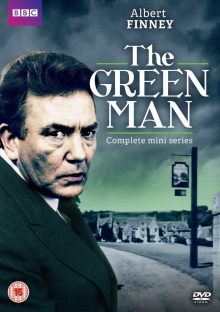 Maurice Allington (Albert Finney) is the womanising, alcoholic owner of a high-end hotel in the middle of nowhere, called ‘The Green Man’. Maurice is quite the raconteur and regularly regales his patrons with tales of the ghosts and spirits that frequent his rather old and quaint establishment. Rumours abound concerning a notorious 17th century occultist who still haunts the place and who wants to return to the land of the living, and it’s not long before such rumours take on a more realistic bent when Allington himself comes face-to-face with an evil spirit in his hotel’s dining room late one night.

When not telling tall tales, imbibing large tumblers of whiskey, and encountering spirits of a more ethereal kind, Maurice is trying to seduce his doctor friend’s wife, Diana (Berger) and set up a threesome to include his long-suffering wife, Joyce (Marlowe). In fact he uses Diana to help him dig up the grave of the old warlock, when said occultist bids him to recover a pagan charm from a box he had buried with him. This charm will facilitate the evil cleric’s return to the land of the living, although cleric Underhill tries to con Maurice into helping him come back by telling him that he will show him new ways of satiating his passions of the flesh as he himself did in life – although it sounds like his passions were of a paedophilic nature!

What nasty Mr Underhill doesn’t bank on is quite how smart Maurice is, even though he spends way too much time three sheets to the wind and avoiding his responsibilities as a father and as a husband. Boozy anti-hero Allington ends up taking on the forces of darkness even though it might cost him dearly in the end. 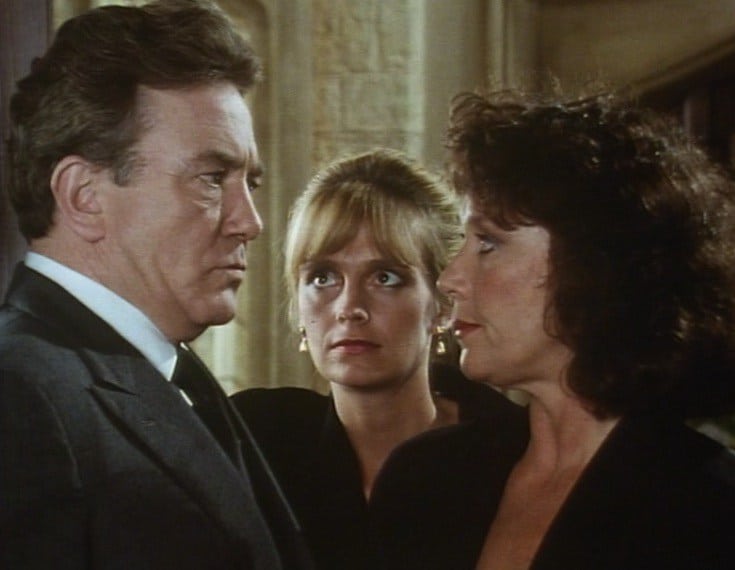 The Green Man is a difficult television series to categorise. It’s a bit of a mish-mash of genres. On the one hand it’s a black comedy of errors, (smutty humour also abounds during the first half – for example, Dianne saying: ‘I’ve been wetter’, with a smirk, after having wine spilt over her) and on the other a supernatural drama with elements of horror riven through it. The vicar is also a good source of humour, intentional and otherwise. 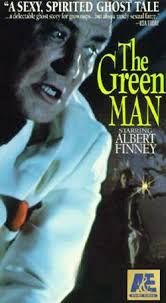 While the pacing is somewhat uneven it holds the attention, mainly due to the excellent acting on offer, particularly from Finney, who is really excellent in this as a cad with a conscience. Also it’s a pity Michael Hordern is not in it for longer – he’s really missed after his untimely departure.

The series is reasonably well shot, but more impressive is the sound design, which is excellent and really adds to the general level of creepiness on offer at some points throughout the mini-series running time. There are shades of progressive-rock band Goblin’s score for Dario Argento’s Suspiria, in this award winning score.

The overall presentation of the series is good, although there are some signs of damage on the print – scratches and dirt speckles can be seen here and there throughout. The story itself is pretty good and draws to a satisfying conclusion, and I’d certainly recommend it to fans of supernatural dramas and ghost stories, and those with an interest in paganism and pagan history.

Simply Media/BBC are distributing The Green Man on DVD. There are no extras on the disc, which is a shame.