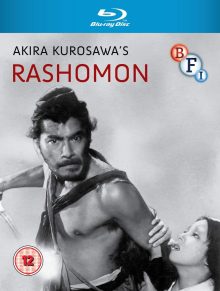 Akira Kurosawa’s Rashomon is a hugely important and influential film. It wasn’t the director’s first by a long stretch (he’d made 11 prior to this according to the IMDB), but it was the film that introduced Kurosawa to the West after it won the Golden Lion at the Venice Film Festival (and went on to win the Oscar for best foreign language film). Not only did this award bring the director to prominence around the world, it was the first time a Japanese film had been internationally recognised. So it opened the eyes of the West to the wonders of other great directors such as Ozu and Mizoguchi, as well as providing a new market to the nation’s cinematic output for decades to come.

So much has been written and talked about Rashomon that I don’t want to ramble on too much about it. I’m just going to talk about how it stands up today and why you should watch it if you haven’t already.

If the latter is the case, you’ll need filling in on what the film is about first. Rashomon sees a woodcutter (Takashi Shimura) and a priest (Minoru Chiaki) recount to a passing commoner (Kichijiro Ueda) what they saw and heard at a trial for the rape of a woman (Machiko Kyō) and murder of her samurai husband (Masayuki Mori) supposedly at the hands of the bandit Tajōmaru (Toshiro Mifune). The two bystanders seem especially troubled by the affair, but not only by the severity of the crime, but by the fact that none of the testimonies match up. We are told the story of what happened by Tajōmaru, the wife, the husband (via a medium) and finally the woodcutter himself who eventually comes clean about witnessing the crime. None of these stories are quite the same, so some, if not all, of those involved must be lying.

It’s this narrative device of hearing a story from various perspectives that has stayed with audiences. It even prompted one of my favourite movie reference gags in The Simpsons – Marge to Homer; “you liked Rashomon”, Homer’s reply; “That’s not how I remember it”. It works very effectively as providing a kind of mystery element, but goes deeper than that in examining the nature of truth in what we are told as well as looking at the honesty or dishonesty of man. The latter is highlighted in the bridging scenes at Rashomon gate with the woodcutter, priest and commoner. The inclusion of the priest as a key character and the fact that the judge is never seen (suggesting a higher power) gives a theological slant too. 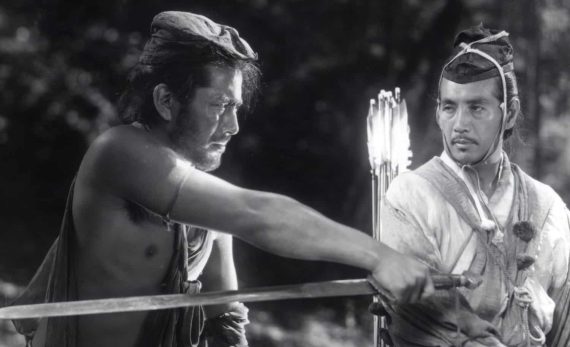 There’s more to admire than just the plot though. As with all of Kurosawa’s work, the film is expertly shot and directed. The trial sequences are static and carefully composed (until the medium is called to get the dead husband’s testimony) but the flashbacks are full of dynamic camera movements and editing. Kurosawa’s signature use of weather is prevalent here too, with the bookending/bridging scenes drowned by a torrential downpour.

The performances are worth mentioning too. Rashomon helped push Mifune towards international stardom and it’s easy to see why. His take on the bandit is very big and physical, creating a wild, animalistic character, jumping around manically and constantly scratching or slapping off mosquitos. Key scenes which differ from story to story are performed in markedly different ways too. The murder for instance is shown as a heroic clash of steel in Tajōmaru’s take, but when the woodcutter tells the tale, the samurai and bandit scramble around like frightened children or wild dogs. The reaction/depiction of the rape differs too, with the wife seemingly enjoying it in the bandit’s story, but looking broken in hers.

It’s a film that’s hard to fault. It’s thought provoking and philosophical, but with sex and violence grabbing your attention, all tied together by a cleverly constructed story. On top of that it’s all very well presented and performed and comes in at a lean 88 minutes. What more could you want from a film?

Rashomon is out now on Blu-Ray and DVD in the UK, released by the BFI. I watched the Blu-Ray version and the film looked and sounded decent. There were a couple of soft shots, but this might be a source material issue.

Included are a handful of extra features. There’s an audio commentary by Kurosawa expert Stuart Galbraith IV. This is densely packed with facts and quotes, so well worth a listen. Galbraith also contributes the 34 min doc, ‘Rashomon at 65’. This was a little unfocused and rambling for me, spending too much time looking around the locations as they are now. There are some interesting interviews later on with people involved or linked to the film though. Also included is a 6 minute interview with John Boorman about the film. He seems uncomfortable in front of the camera, but there are some interesting tidbits.