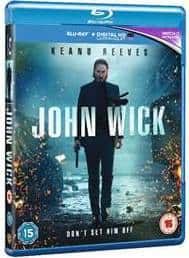 John Wick (Reeves) has suffered a loss. His wife (Moynaham) recently passed away, but after her funeral Wick is delivered a final gift from her, in the form of the most adorable beagle puppy ever. It’s like it was created in an adorable puppy factory. Anyway, this gift was intended as something for Wick to focus on instead of his grief, something to drive him past this unbearable experience and continue on with his life, so when he runs foul of low-life Russian gang member Iosef (Allen) with an eye for Wick’s vintage Mustang, and Iosef beats up Wick, steals his car and kills the dog, needless to say some vengeance is very much on the cards.

Back in 2008, Liam Neeson proved with Taken that the action hard man mantle could be successfully picked up by older, less obvious contenders, which has led to a slew of lesser imitators, many of which have starred Neeson himself. Whilst Keanu Reeves isn’t yet as old as Neeson was for the first Taken film (Reeves is 51, Neeson was 56), and despite having starred in a few action movies in the past, he’s still not someone I’d nominally associate with being an action star. Granted this is more to do with my lack of faith in his acting ability and his choice of projects in recent years, and the fact that the two types of persona he can adequately play – stoned slacker or empty-faced audience cypher – don’t often make for compelling action leads, so me loving pretty much everything about John Wick came as a joyous surprise. 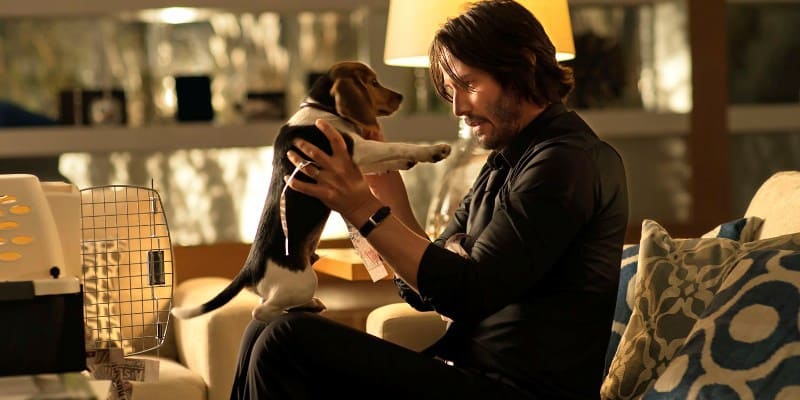 It predominantly lies in it’s simplicity. What we have here is a very basic premise – man enacts revenge for his murdered puppy – played out with beautifully shot and choreographed fight sequences and spiced with interesting, flavourful hints at the wider world. Wick, it turns out, has a past, and that past involves a cache of weaponry and the ability to use them, and use them he does in the most glorious of ways. It’s hard to pick a favourite fight scene in a film chock full of amazing ones, especially given how varied they are. They range from one-on-one to one-against-many, using heavy weaponry, cars or nothing but bare hands and their surroundings, and each one plays out wonderfully. Sometimes with a film of this nature it’s possible to become jaded by all the violence, but John Wick maintains a level of freshness with each new scene. It also helps that the film doesn’t overstay its welcome, not feeling the need to pointlessly pad the story with unnecessary side plots.

What we do get is some inventive world-building of an underground community within New York, comprised of assassins and mobsters and the circles they move in. There’s a particularly novel concept of a safe-zone hotel in the Flatiron building, within which anyone can stay and find solace – for a fee – safe in the knowledge that nothing untoward will happen to them there. This sees hunters and prey sleeping under the same roof, and poses some intriguing moral and logistical questions too. Plus, something that’s always concerned me in the past is just who cleans up the mess after the bouts of violence go down, something which is neatly dealt with here too. 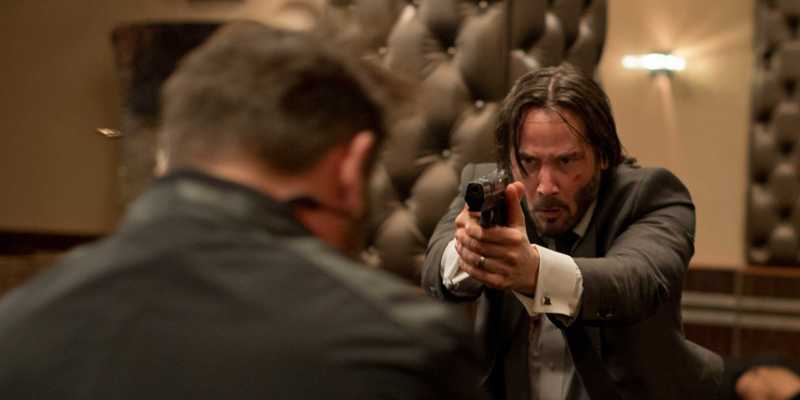 Reeves works well as the lead, though it helps that Wick isn’t the most expressive of characters, so Reeves’ standard taciturn performance fits well. In fact, most of the stellar supporting cast members are playing roles that are hardly ground-breaking for them, and don’t really require the actors to stretch themselves, but they all perform adequately for the story. Michael Nyqvist is Iosef’s gangster father who is only too aware of what Wick is capable of, Ian McShane is particularly good as a mentor-of-sorts to Wick, Adrianne Palicki and Willem Dafoe are fellow assassins and John Leguizamo runs a garage. The only problem with some of these roles is just how small they are. Leguizamo and McShane are unforgivably under-used, and in my eyes that’s a crime.

This won’t change your world, and it’s no surprise that it didn’t bother the Oscars too much earlier this year, but it is a lot of fun and would make for a very entertaining night in. I’d just recommend not watching it with someone who is easily affected by canine trauma, as that didn’t go down terribly well in my freshly puppy-filled household.

John Wick is available on Blu-Ray and DVD.

The release includes an audio commentary with directors Chad Stahelski and David Leitch, and various featurettes on topics such as the directors, the assassin world of the film, and the fight choreography.