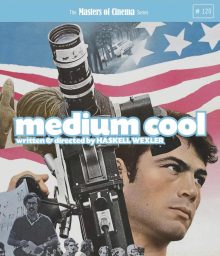 Like my decision to take a look at The Decline of Western Civilization Collection, my agreeing to review Medium Cool was on a bit of a whim. I’d vaguely heard about it and the director sounded familiar, but I didn’t really realise its pedigree until just before watching it. I also didn’t know much about how it was made until after I’d watched it, so it’s a case of my opinion of the film becoming more positive a day after viewing.

You see, what makes Medium Cool special is that director Haskell Wexler, who is better known as a cinematographer and documentary filmmaker, combined fictional drama and actors with real life events. A few other directors had combined the ‘real’ with the ‘fake’ before this, but no one had quite done it in this extreme fashion.

The film follows news cameraman John Cassellis (Robert Forster) as he covers important cultural and political events during the turbulent late 1960’s. Cold and detached, he pays little attention to the consequences of what is going on around him. He’s only looking to get the most sensational footage he can. When he is fired after kicking up a fuss about his work being given to the FBI, he falls for Appalachian single mum Eileen (Verna Bloom), who lives in the rough side of Chicago with her son Harold (Harold Blankenship). His personal and professional life finally collide with the political turbulence around him when tragedy strikes at the riots during the 1968 Democratic National Convention.

What makes the film’s approach particularly extreme is that, alongside taking his actors to a number of real locations and situations, Wexler actually predicted there would be civil unrest around the convention and prepared to shoot there around the time. He took his crew and actors right into the midst of the chaos and shot the pivotal final act amongst the police and protesters. Possibly the most famous scene in the film (from what I’ve heard) is where a tear gas canister is thrown towards the camera and you hear someone shout “look out Haskell it’s real!” After watching the supplementary material on the Blu-Ray it turns out the line was dubbed in afterwards, but the tear gas was real. Haskel and his crew were hit by the fumes and were in agony afterwards. It’s bold and daring filmmaking the likes of which are rarely seen.

The filmmaking methods certainly add an impressive naturalism to the film, but the story that has been fit around the events is nothing special. Much is left out, leaving the audience to fill in the gaps and the relationship between Cassellis and Eileen isn’t particularly well developed. How the film does work however, is in presenting a time capsule of the various issues of a crucial time in US history and how much of the general public were very passive in their approach to what was happening. Everything from racial segregation to poverty to politics are hit on and the film was shot around the time of Bobby Kennedy’s assassination. 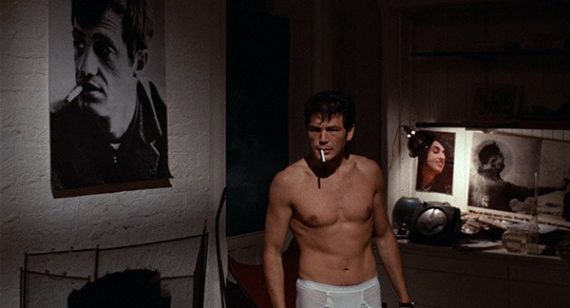 This makes the cinéma vérité style vital in getting Wexler’s core themes across to the audience. Occasionally it’s quite blunt in doing so, particularly in the film’s closing scene, which I wasn’t a massive fan of, but generally the film is a powerful indictment of the public’s desire for sensationalist media and lack of interest in the true issues and consequences. This is also demonstrated in the opening scene, which is more than reminiscent of last year’s Nightcrawler. Cassellis and his sound man grab some footage at a car crash, before calmly leaving a possibly still living passenger and suggesting they’d “better call an ambulance”.

The film has a loose structure, exploring the film’s ideas more than worrying about driving the narrative forward. As such it can feel a bit meandering and slow, but there’s enough food for thought to keep you interested. A few things were a little lost on me as I don’t know much about American politics. I hadn’t a clue what was going on during an unusual shot in a kitchen, until I saw the included ‘making of’ documentary which explained it was depicting Bobby Kennedy’s assassination. Supposedly Americans would all know the relevance of what was shown and heard, but I certainly didn’t.

What always kept me on board whenever I got a little lost or started to struggle with the pace though was the style. A film about a cameraman, directed by a cameraman was always going to have some showy cinematography and it didn’t disappoint. Wexler shot a number of classic films in the 60’s and 70’s, including One Flew Over the Cuckoo’s Nest and Who’s Afraid of Virginia Woolf? and he pulls out all the stops here. There are several impressive tracking shots, an awesome ‘bike-cam’ sequence and some interesting uses of different lenses, framing and unusual perspectives (windows, mirrors etc.)

So although Medium Cool can feel a bit meandering and I thought it stumbled a little in its rather blunt ending, it’s so thought-provoking and artistically and technically exceptional that it still comes highly recommended.

Medium Cool is out now on dual format Blu-Ray and DVD in the UK, released by Eureka as part of their Masters of Cinema series. I saw the Blu-Ray version and the picture and audio quality is excellent as is to be expected from the label.

You get a healthy dose of supplementary material. There’s an audio commentary with writer and director Haskell Wexler, editorial consultant Paul Golding, and actor Marianna Hill for starters. This is very rich and has little down time. I had a noisy two year old to contend with whilst I listened, but what I heard was great. Haskell frequently mentions the film makers who inspired him such as Jean-Luc Godard, Peter Watkins and John Cassavetes.

There’s also Look Out Haskell, It s Real!, extended excerpts from Paul Cronin’s documentary. This is very good too. There’s a lot of detail on the making of the film as well as the politics of the time. I watched it before any of the other features so it really made me appreciate the film more than I did at first largely because I didn’t realise so much of it was shot ‘for real’. Excerpts from Sooner or Later are also included, where Harold Blankenship is interviewed almost 40 years after appearing in Medium Cool. Finally, there’s Haskell and the Cameras, where Wexler demonstrates the cameras used to make Medium Cool.

And of course, as with all Masters of Cinema releases, you get a booklet in with the package. This time it’s made up of a report written on the violence during the Democratic National Convention in 1968.