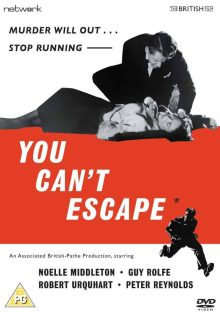 Based on the novel ‘She died young’ by Alan Kennington, You Can’t Escape is a film noir-ish little number that sees novelist Peter Darwin (Robert Urquhart, from The Curse of Frankenstein), rapidly getting engaged to heiress Kay March (Noelle Middleton) after he rescues her from a plane crash. When he suddenly gets a call from his ex-girlfriend, Claire (who he has always kept a secret), he heads off to meet her at a rural pub. They argue and he tells her that he’s through with her and ‘her set’: ‘drinking gin out of cracked cups until dawn, sleeping until noon, always working for tomorrow, never today’. As he drives her back to her car, Claire reveals that she is pregnant and is then accidentally killed when she falls out of the speeding car.

Returning home with Claire’s body, Peter manages to convince Kay to help him bury the body in some nearby woods, reasoning that Claire was going to blackmail him and the scandal would have damaged both of them. When he returns to Claire’s flat to collect some of her belongings – to pretend she’s gone away for a few weeks – he’s spotted by curious journalist, Rodney, who – interest piqued – decides to investigate further, his senses for a good story on fire. In addition to the journalist, Peter has also aroused the suspicions of Claire’s long-standing friend, a doctor, who doesn’t believe that the woman, he was quietly in love with, would just disappear without saying anything to him.

As the pressure mounts, following Rodney persuading some local archaeologists to start digging in the private woods where the body is hidden, Kay’s resolve to remain quiet about what really happened to the missing Claire begins to crumble… 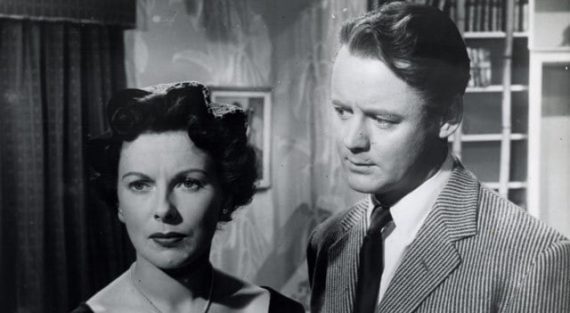 You Can’t Escape is a fast-paced thriller that makes a good case for the old adage that the ‘truth will set you free’. As one lie leads to another, even bigger, lie, Peter is soon forced to commit even more heinous crimes than simply lying, and he ends up turning to murder to keep all the other lies buried.

The acting is very good, particularly by Urquhart who goes from playing a character who retains some of the audience’s sympathy to one we end up despising because of his cowardly crimes of passion and greed. Even the somewhat slimy character of Rodney comes out smelling of damp roses compared with Peter! Actually, it is Rodney’s cunning actions that finally save the day, although, as is frequently the case, the journalist is made out to be a bit of a crook.

As is often the way with these older films, part of the viewing pleasure is in ‘enjoying’ the fashions and fads of the times during which they were made and chuckling at how such activities as drinking and driving and smoking indoors were tolerated back then. And some of the cars featured in the film even had doors that opened the other way round, which is kind of freaky! 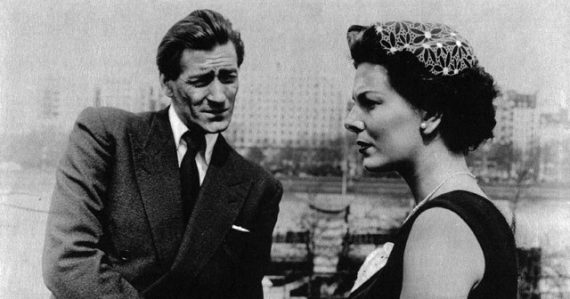 Despite its rather stagey tone You Can’t Escape remains a fun example of British B-movies from that era and is therefore well worth checking out.

You Can’t Escape has been released on DVD and is being distributed by Network Distributing who are, to their credit, currently releasing lots of these rarer British film titles.

Extras include a trailer that is told from the perspective of the journalist and a picture gallery of ten images, two of which are posters for the film. There’s also a full-frame version of the movie.