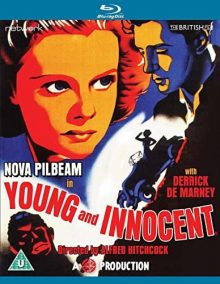 I’ve always been a big fan of Alfred Hitchcock, I even wrote my university dissertation on his collaborations with composer Bernard Herrmann, but there are still a number of gaps in his filmography that I need to fill. I’ve seen pretty much all of his most famous work, particularly his phenomenal run of films through the ’50s and ’60s, but there are a number of his early British films that I haven’t seen. This period in his career doesn’t always get the love and attention that it deserves. Granted, many of these older titles haven’t aged as well as classics like Rear Window or North by Northwest, but there is much to admire and enjoy in his early work. The 39 Steps remains one of my favourite Hitchcock films for instance and I was surprised by how much I liked what he himself considered his true directorial debut, The Lodger when I was sent it to review a couple of years ago.

This brings me to Young and Innocent (a.k.a. The Girl Was Young), a film which I hadn’t seen before now, even though I had a DVD copy on my shelf gathering dust over several years (this happens far too often than I care to admit – shopping addiction is a dangerous thing). Coming in 1937, this, his 22nd feature film as sole director, is actually almost mid-career for Hitchcock in terms of volume, although he’d only been directing features for a little over a decade. Taking the ‘wrong man’ mistaken identity formula he’d had great success with on The 39 Steps, Young and Innocent sees Derrick De Marney star as Robert Tisdall, a young man accused of murdering an actress whose body washes up on a beach. He’s innocent of course and escapes from the law to prove it because they won’t listen to him. Along the way he enlists the help of a police constable’s daughter, Erica (Nova Pilbeam), who believes his story and falls for his charms.

I really enjoyed Young and Innocent. It’s a great trial run for the sort of film Hitchcock would perfect with North by Northwest. Admittedly he’d already done similar and better a couple of years previously with The 39 Steps, but this still holds up on its own merits.

The humour stood out front and foremost for me. It didn’t have me bursting out in laughter, but the lighthearted tone and a regular flow of witty banter made for an utterly charming film. Many of the performances are quite dated, but the two leads bounce off each other nicely and Pilbeam is particularly loveable as the strong-willed heroine. 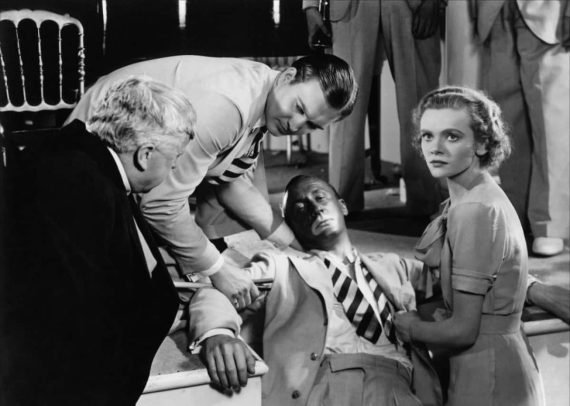 In terms of thrills and excitement, Young and Innocent isn’t quite up there with Hitchcock’s best though. It’s a little quaint for its own good at times, other than in a couple of scenes such as the melodramatic opening (complete with thunder and lightning crashes) and an enjoyably messy pub brawl. The integration and flow of action is quite clunky too. A random detour into a mine pops out of nowhere for instance and the car falls instantly into a crumbling hole. The crash effect is kind of cool, with some nice practical effects, but there isn’t much tension as it all occurs in such a rush.

Speaking of effects, there are also some quite laughable model shots. A pan across a model village and train station looks nice to begin with (though not particularly realistic) until the camera comes across models of the actors/characters! These are clearly dolls and ruin a potentially decent and elaborately designed shot.

Dated aspects like this (other than a black-faced minstrel sequence) are part of the charm for me though and I did have fun watching Young and Innocent. There are also flashes of Hitchcock’s directorial skill here and there. Some bold tonal cuts in the visuals and soundtrack work nicely for instance near the beginning when the body is found. A long, steady zoom in on a character at the end of the film to reveal him as the real killer is pure Hitchcock too alongside the clever use of music in the scene. Incorporating a music performance into the finale brought to mind the 1956 version of The Man Who Knew Too Much.

So although it lacks the polish of Hitchcock’s more well-regarded work, Young and Innocent is still an entertaining and admirable addition to the mighty collection of films the director provided us over several decades. Fans should definitely give it a shot.

Young and Innocent is out in on Blu-Ray on 19th January, released by Network as part of their The British Film collection. There are signs of age on the print, with some light lines and flecks here and there as well as a bit of wobble and softness occasionally, but overall it looks good for a film of its age and you can see some nice added detail and texture through the HD transfer. Audio is decent, although a few lines came out strangely here and there, but this is likely to do with the source material rather than the transfer.

For special features you get an introduction by Charles Barr, an image gallery and a 25 minute documentary called Hitchcock: The Early Years, which looks at the director’s pre-war career.