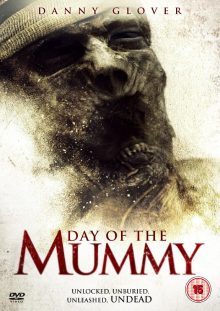 After a quick intro’ where we see a Professor Bhar and his assistant being attacked inside an underground tomb, the film rapidly shifts gear and introduces us to a desk-bound Danny Glover, playing some billionaire called Carl Rosenkane contacting a freelance adventurer and Egyptologist, Jack Wells (McNamara), who we first see bedding two nubile women. Sucking his stomach in like there’s no tomorrow Billy McNamara talks to Carl via a Skype-like call and reluctantly accepts a mission from him. His mission now that he’s stupidly accepted it is to join an expedition to find the tomb of an ancient Egyptian pharaoh, Nefaru, also known as The Cursed King because of the way in which he met his death at the hands of his family. And once he’s located the tomb he’s to find the mummy and steal a big fat juicy diamond (the Codex Stone) from its chest cavity! Our B-movie equivalent of Indiana Jones is given a pair of special spectacles that allow Glover to see what Jack sees and an ear plug/microphone, which allows Glover to talk to him and receive updates.

Things don’t start too well when it turns out that the expedition he’s joining is headed up by an old rival, one who hates our Jack with a vengeance. On the plus side the rather useless female security officer he’s hired is rather fetching, as Carl realises from the amount of time Jack’s eyes are drawn toward Kate’s ample bosom!

Not only does the expedition have to survive bad weather and a fierce desert, it also has to take on corrupt military gangs and a guide who knows more than he’s letting on about the tomb of the cursed king. Once inside the tunnels they also have to tackle cave-ins and a reanimated corpse who’s not too happy they disturbed its peace… 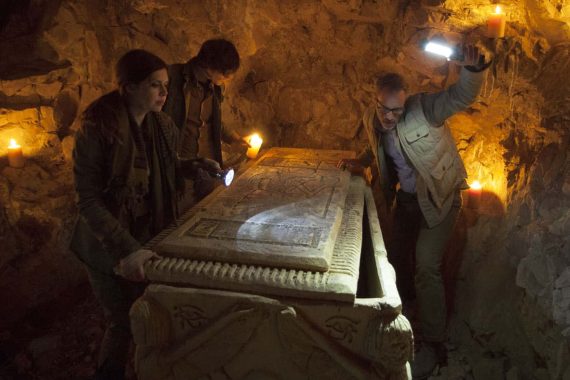 Day of the Mummy made quite a refreshing change from a lot of the films I’ve seen recently. Not only does it put a bit of a fresh spin on the old Mummy subgenre, it also has a novel way of sharing its story with us, namely though Jack’s special specs. Of course this has its drawbacks – sometimes the specs are a little too conveniently placed in a spot that allows good coverage of a scene – and I found Jack’s dialogue, and that of Glover’s, sounded a bit tinnier than the other characters, which is a bit frustrating since Jack is the central hero-figure and we’re supposed to hear what these two principal characters are saying to each other. However, to be fair, I got the impression that the film wasn’t taking itself too seriously and there’s quite a bit of humour in it, intentional and otherwise.

Other points to note: some of the tablets with Egyptian hieroglyphics on them looked out of place and a bit too new to go with the rest of the tunnel system they find them in; the acting is a bit of a mixed bag with Glover, in particular, generally looking rather bored and pissed off that he couldn’t be on location with the rest of them; the creature make-up effects are pretty well done, but we don’t get enough Mummy action – maybe they should have retitled the film to ‘Three minutes of the Mummy’!

All in all Day of the Mummy is a bit of low budget fun, especially if you miss the likes of films like Doc Savage and King Solomon’s Mines. I just wouldn’t stick around for the two codas, which don’t really improve on the overall story, and the latter one is just too cheesy.

Day of the Mummy has recently been released on DVD and is being distributed by Image Entertainment. The only extras on the review disc were a few trailers for upcoming releases including Penthouse North, Varsity Blood and Werewolf Rising.