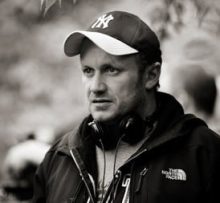 I was lucky enough to prise the director away from his current project in an LA hotel to chat about Frank, out on DVD & Blu-Ray in the UK on 15th September.

Katy Vans – How did you get involved with Frank?

Lenny Abrahamson – 4 years ago I got sent a script by my agent, it was a strange project, impossible to categorise and I thought “Am I really going to film this?” It stuck with me, I couldn’t stop thinking about it, it was so fresh and inventive. I met Peter [Straughan] and Jon [Ronson] the writers, and we hit it off, we agreed on reworking the script to make it into something we could film. And you know with film there is also that thing where you realise it might not even happen, might not get any funding. But I wanted to do it, I became connected to the project and you know it becomes yours to a degree so I had to do it. Jon and Peter were great to collaborate with, we all felt the same about the project.

KV – I watched Garage a few years ago and I saw a real parallel between the main character of Josie and the character of Frank, both sweet, gentle, simple souls, did you see similarities?

LA – Partially by virtue of being me I can see why I chose these characters, I can see these parallels but didn’t consciously impose that. In hindsight I can see it. They are both characters overwhelmed by the world, the world is enormously uncertain to them, they’re like kids in that way, I’m moved by that. There’s a great tradition of setting characters in stories where they are dwarfed by their worlds and need tender care.

KV – Did you know of Frank Sidebottom (on whom the main character is inspired by) before you got involved in this project?

LA – I watched him on TV as a kid and found him disturbing and strange but as an adult I watched him again and he is an amazing creation. I wouldn’t have made the film if it was about Frank Sidebottom though. I made a fictional-real character inspired by a real-fictional character, it’s complicated. 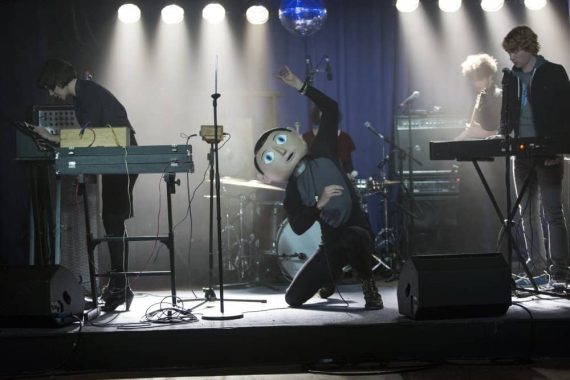 KV – How do you direct a man wearing a giant head?

LA – It was all very natural, you still do the same things, setting the scene and the characters. The character is right in front of you, just in a mask. Our sense of the mask changes, we read into it. There is a cinematic language and the audience understands it and can project emotions onto Frank. At first I did have a quiet word with myself asking “What if this doesn’t work?” but it did. It also brings about extra expressive elements; there has been an abstraction in lots of art for a long time and it allows you to find a new language of expression. With this film the audience had to read Frank, a small turn of his head left them wondering what it might indicate, you can play with that.

KV – Did you feel there was a connection in the film between the way you use social media to tell the story and Frank’s mask; both being false versions, edited versions of reality?

LA – Initially it wasn’t deliberate, the film was set in the 80s and it was just a voiceover of an older Jon [the other lead character in the film] , when we made it contemporary, using social media seemed right. I could then see the many internal resonances between social media and Frank’s mask, the false presentation of self, it is at its most extreme on social media, what is hidden, what is revealed, what is projected and what is truthful. 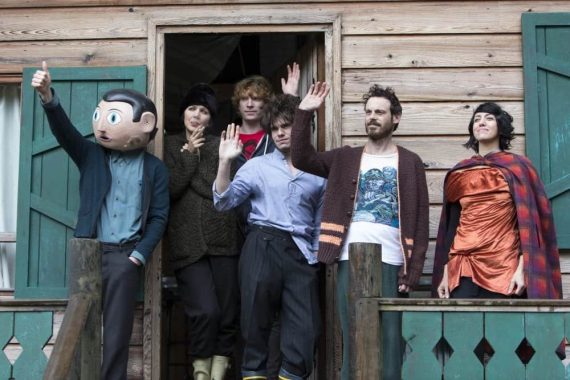 KV – Do you feel there is a correlation between creativity and mental illness?

LA – I’m an agnostic about that, maybe there is but the film is saying whether yes or no it is not glamourous, that is a terrible over simplification, a glamorisation of suffering. Jon’s clichéd thoughts about it don’t stand up to scrutiny, you look at Van Gogh and Kurt Cobain, they had awful experiences, turning them into cool pop culture images is wrong. In this film I show a humane view of an overwhelmed person.

LA – I’m in LA casting for my next project Room based on the book by Emma Donoghue about a boy and his mother, she is kidnapped and held captive and has a child with her captor and it’s about what happens when they get released and how they get on with their lives. I’ve cast Brie Larson as the mother and I’m looking for someone to play the son currently. I’m planning to start shooting in October this year.

Frank is out on September 15th in the UK on DVD and Blu-Ray, released by Curzon Film World. Read my review here.