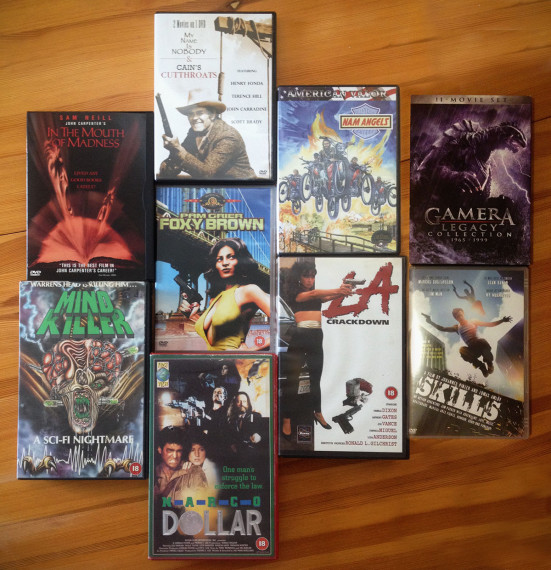 Being too busy at work to go on holiday for a fortnight, my wife and daughter jetted off without me the other week. This meant that yours truly was left a lonely man with only an ever expanding movie collection for company. There was an easy fix to this dilemma though – pack up a bunch of those movies and head across the country to get together with the guys for a Weekend of Trash! (previous write-ups can now be found in the category archive).

SO as ever, here are the reviews of everything we watched over the weekend. The reviews are only brief (I’m not about to start writing notes and getting analytical whilst chain-watching women in prison and kung-fu movies) and ratings are largely based on entertainment value rather than quality, so take them with a pinch of salt. I’ve included clips and trailers when possible too. 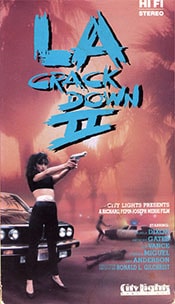 Eurgh… Not a great start to the weekend. This ultra low budget ‘thriller’ sees a female police officer work under cover (briefly) as a ‘dime a dance’ girl to catch a psychotic killer who’s also involved in a bank job. It sounds like the perfect setup for a decent serial killer flick, but the inept director instead uses it to setup an hour and a half of filler.

I’ve never seen a more padded out and poorly edited film in my life. Every shot is overdrawn, the background sound lurches in volume horribly and conversations are ridiculously stilted. The plot is simple yet still doesn’t make sense as both the criminals and cops seem to always know what the other is doing for no good reason. I’d forgive a lack of plot if the film was fun or exciting, but instead of having any expositional scenes to aid the narrative the film throws in totally unnecessary pool playing or shopping scenes (seriously).

So yeah, this is bottom of the barrel stuff. I found it strangely more watchable than Roller Blade Seven and Strike Back but it’s still a steaming pile of crap.

One of the few actual action set-pieces in the film:

The whole film should you feel like torturing yourself: 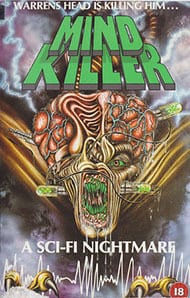 Attempting to tap into a Cronenbergian vibe, Mind Killer doesn’t quite manage to match the brains or class of the Canadian director, but it works well enough as an icky horror romp.

It starts quite slowly with a first half leaning more towards comedy than horror as our protagonist struggles to hit it with the ladies until he finds a mysterious manuscript giving him powers of telekinesis and mind control!

This goofy opening leads towards a fairly creepy and gooey climax. The effects are hardly realistic but still effective, prompting a few ‘ews’ from this reviewer.

It’s a lot of campy nonsense at the end of the day, but as trashy low budget horror it was well worth the watch. 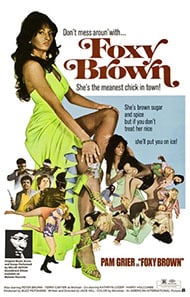 Pam Grier is at her badass best in this blaxploitation classic. The film rides on her charisma really. The plot is fairly standard revenge stuff involving Grier’s Foxy Brown getting back at those that killed her boyfriend, but the lead actress brings it alive.

It’s quite a brutal film which doesn’t flinch from some of the nasty stuff that goes on in the world of drug dealing and sex trafficking. It has a social conscience like a lot of the blaxploitation movies too, but really the draws are Grier, plenty of cool quips and some bloody violence here and there. Solid stuff.

In the Mouth of Madness 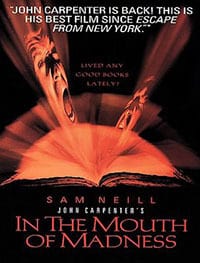 I’ve always been a big John Carpenter fan (before he went crap) but somehow this had passed me by all these years. Luckily for me it was the ‘established favourite’ pick of the weekend.

Sam Neil stars as an insurance investigator looking into the disappearance of a hugely popular horror writer. This begins a terrifying descent into, you guessed it, madness.

I really liked this. It’s Carpenter at his best, crafting an engrossing story and supplementing it with great cinematic visuals and a good dose of scares.

It maybe gets a bit garbled by the end and isn’t as out and out terrifying as say The Thing or Halloween, but overall this is classy psychological horror from the king of genre cinema. 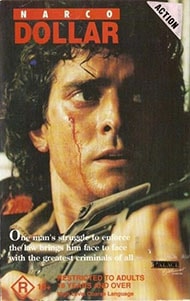 A cop that doesn’t play by the rules is caught in between a drug war. You know the deal – people get killed, the police chief gets angry and a kid/wife gets kidnapped.

This was a classic example of what most bad genre movies get wrong. There’s a healthy amount of action with dockland and warehouse gunfights a plenty, but there’s nothing else to engage you so that you give a toss.

The main problem is that it’s really hard to follow. The people you think are heads of each side of the drug war keep getting killed so you’re never totally sure who’s who. Add a dull lead character and you’ve got an action packed film which is still a slog to get through.

* I’d like to note that this film can’t be found on IMDB. It always feels like a great achievement when we manage to track down and watch a film this obscure. It’s just a shame it was crap. 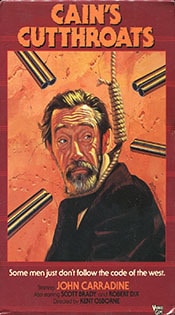 In this 70’s American Western with a Spaghetti feel, Scott Brady plays a former Confederate captain out for revenge after his former soldiers rape and murder his wife and kill his young son. Helping him is John Carradine, playing a preacher come bounty hunter.

This is grim stuff, not shying away from violence or any other nastiness, but at the same time has a lot of dark humour. It doesn’t quite have the style of the great spaghetti westerns and the soundtrack is gleefully inappropriate but it’s a solid down and dirty western nonetheless. 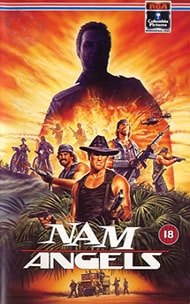 This film by low budget action legend Cirio H. Santiago promises one of the most awesome exploitation concepts and delivers on every level.

When two soldiers are captured deep in enemy territory in Vietnam and there’s only a 1 week window to save them, Calhoun (Brad Johnson) uses a secret weapon to get them out: a group of the Hell’s Angels!

With plenty of explosions, gunfights, motor biking and very little filler, this is one of the rare exploitation titles that lives up to its promise. It never takes itself too seriously, the action is decently enough handled for its type (i.e. lots of machine gun strafing and exploding huts) and the pace never lets up. Perfect video weekend fodder. 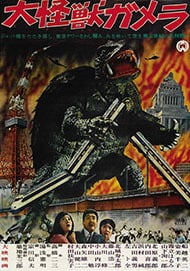 I’m very new to the kaiju genre having only seen the original Godzilla and the American attempts at joining in the fun, but I’m trying to sample more of their joys.

This, the first of the Gamera series, saw Daiei Studios attempt to cash in on the international success of Toho’s Godzilla series by creating their own monster, the fire eating and breathing turtle Gamera. You know the drill; he appears due to an atomic accident, he wreaks havoc on the world (particularly Tokyo) then he is stopped through some crazy trap by scientists.

I enjoyed this. It’s not as classy as the original Godzilla, which is rather bleak and displays a bold political message, but Gamera is entertaining enough and looks quite nice with its black and white photography and cool scenes of destruction. It’s all a bit silly though and the quality of the models is pretty inconsistent. It’s a little slow too, but in general this is a fun piece of early kaiju history. 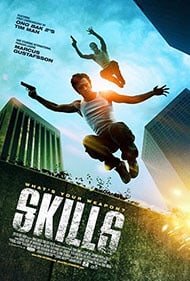 This Swedish parkour martial arts movie sees a teenager try to take revenge for the shooting of his dad and uncover the mystery of a secret tournament which he was investigating before the incident.

Skills was pretty disappointing. The parkour and fight scenes are cool and there’s a decent amount of them. Unfortunately the rest of the film falls flat on its face. Everything is very po-faced, forcing big drama out of plot points which don’t feel like they justify it. The whole idea of the tournament doesn’t seem all that evil or wrong so it doesn’t make sense why it’s kept so secret and the bad guys go to such lengths to find fighters and keep things under wraps.

On top of this core problem, there are also a number of poor performances. The main leads aren’t that bad, but they lack charisma so aren’t interesting to watch.

That said, it has its moments and when the action takes centre stage it’s fun to watch. The finale is clumsily handled though which makes the sense of disappointment linger, which is a shame as it could have been a really cool action movie.