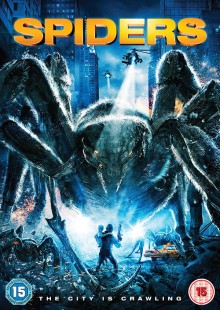 Spiders 3D joins the long ranks of films featuring these antagonistic arachnids that are Hollywood’s best friend when it comes to rolling out a naturally occurring bad guy pest. Being a fan of spiders on screen I was quite looking forward to seeing this hairy-legged entry in this particular sub-genre of film, however, Spiders 3D only partly sated my need for on screen arachnid anarchy. That’s not to say it’s a bad film – it’s entertaining throughout – it’s just that it didn’t really do it for me.

An abandoned Soviet space station hurtles to Earth and crash lands in the New York subway. And before your local health inspector can say ‘get the radiation suits out’ a nasty mutant space spider has already bitten an underground worker and is making its way through the local rat population with the help of its equally mutated friends!

Things rapidly get out of control and the government/military machine quickly tries to hush things up, pretending there has been a bacteriological outbreak related to the space debris to enable them to quarantine the local area. But things aren’t all as they seem and we soon find out that the US military have been in cahoots with a crazy Soviet scientist and have been bioengineering some mutant spiders that they found years ago in a crashed UFO (as you do) in order to use their ultra-strong webbing for warmongering purposes.

And, in the blue corner, we have the Cole family who are pitched against not only these nasty extra-terrestrial spiders, but also the, in this case, untrustworthy US military. The father, Jason, is caught up in events because of his job with the New York transport authority and his soon-to-be ex-wife is also sucked into events because she works for the local health authority and Jason passed on some spider eggs to her for further analysis. Soon the couple must work together to help save their 12-year old daughter and, in the process, save the city that they already spend too much time cleaning up, one way or another. 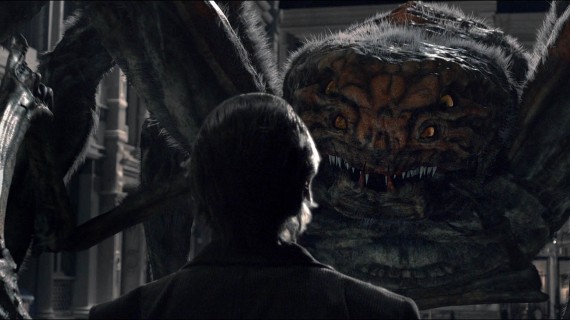 Spiders 3D moves along at a fair old clip, not really stopping to consider some of the massive gaps in logic or scientific fact that litter its running time. However, this is a giant bug movie so that’s not really the film’s problem. Although it’s well shot and looks like it had a reasonable budget Spiders 3D falls down with its title stars – they’re just not creepy enough. I don’t think the distinctly average special effects help things, but I think, particularly in the early stages, they should have kept the smaller critters more to the shadows and built up an atmosphere of ickiness (technical term!) rather than show everything in the first 60 seconds of the film. Plus some of the spiders just look too cartoony to engender much of a scare factor. Also why do filmmakers feel the need to give every creature a weird ‘mammalian noise’ to make – after all one of the things that makes spiders so creepy is they make no noise – they’re silent and deadly predators – they don’t make squeaky noises! And I’m sure space spiders would be the same…

Plus the dodgy CGI doesn’t stop with the spiders; there are also some dreadful CGI bats, which were totally unnecessary, in my humble opinion.

I appreciate the main draw with this movie was that it was apparently shot in 3D, although having only seen it in 2D I can only speculate which parts might have worked well in that format. Apart from a few spider appendages coming out towards the viewer I don’t really see that shooting this stereoscopically has been an advantage. There’s also indication that some of the 3D was done in post-production through a conversion process, which might explain why I had little sense that this might have looked better in that particular format.

On the plus side I found the film relatively engaging, appreciated the actors’ performances and enjoyed the inherent overriding cheesiness of it, although there was too much running around on the same few sets by the principal characters and everyone seemed to be taking it all very seriously!

However, Spiders 3D is still worth a look if you’re a bug movie fan.

Spiders 3D has recently been released on DVD and Blu-Ray and is being distributed by Lionsgate. The special features on the disc include various trailers for other recent releases including Rapture, ATM, You’re Next, Hummingbird and Only God Forgives. There’s a short (5.35 minutes) behind-the-scenes featurette called ‘Web of Terror: The making of Spiders 3D’, which is primarily a fluff piece for the press and a slightly longer featurette (12 minutes) featuring interviews with the director, a few of the main actors and the cinemaphotographer, I think – it’s hard to tell when there aren’t always name straps! In fact we really needed to hear more from this latter character, but sadly his segment of the featurette only lasted for less than a minute so this was a missed opportunity. However, one does get the idea that this was a fun film to make though.