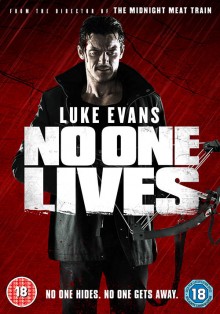 A young woman frantically runs through some woods, away from an unseen pursuer. As she nears a road her legs are suddenly caught up in a trap and she is hauled into the air, swinging upside down. She hastily carves her name into the tree trunk, a sign to her worried family that she is still alive, even after being missing for several months.

A young couple are driving cross-country to relocate. They stop at a remote roadside diner for food and encounter a dangerous criminal gang there who later take them hostage, thinking they have valuable assets in their trailer. But when the girl, Betty, dies in the hands of one of the gang the man escapes and the tables are dramatically turned when his true identity is revealed, an identity that connects him to the girl from the film’s prologue.

No One Lives could potentially be seen as a slasher film, but that would probably be unfair to it, as that sub-genre of films tends to be somewhat formulaic and this is nothing of the sort. Ryuhei Kitamura’s second American film, after the under-rated The Midnight Meat Train, is definitely a giant side step back to some of his crazier Japanese roots (Versus) and none the worse for it.

The film features one of cinema’s best psychopaths, with Luke Evans displaying some serious sick sex appeal as a Patrick Bateman type of all-American psycho. Evans (who’s actually Welsh!) reveals more with a quick look or half smile than a thousand Pacino raging speeches will ever manage to do. If genre films ever got a fair crack at major film awards then this one would quite rightly win several, including a best actor for Luke’s performance.

Just when you think you’ve seen it all in horror films a writer or director comes up with something fresh and original and there are a few moments in No One Lives where your jaw drops and you say ‘what the f*$*’! There are some awesome gore gags for crimson lovers and most of the set pieces will be hailed as classics in years to come. 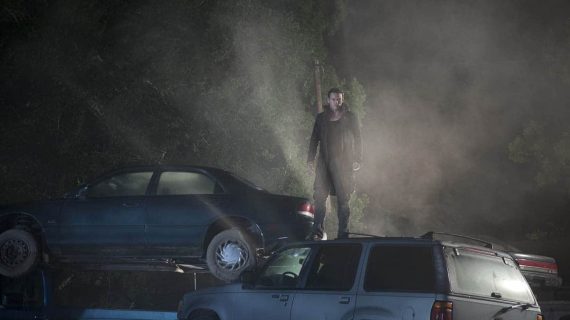 There’s also a nicely realised slice of jet-black humour in No One Lives with both the killer and the gang members getting some genuinely funny one-liners to say. For example, one girl, who is struggling to survive with a scythe rammed through her, asks the man why he’s doing all this. After a pause he shrugs and replies: ‘It keeps me fit’!

The film reveals a disturbing intelligence throughout and poses more questions than it answers about Evan’s crazy nature and why he does what he does. On further reflection it appears that he might be trying to ‘train’ someone to be capable enough to stop him (a bit like in The Hitcher), but that’s never really made clear.

The film is very well made, well shot, well acted and holds the viewer’s interest for the whole of it’s running time, even if sometimes you’d quite like to look away!

If this film is successful I wouldn’t be overly surprised if there was a sequel of sorts, but I guess we’ll just have to see. The main protagonist has already broken his own golden rule by the end, but maybe that’s what makes him so ‘badass’; he even breaks his own rules!

No One Lives has just been released on DVD and on Blu-Ray by Anchor Bay Entertainment. The DVD doesn’t appear to have any extras on it (apart from some promo trailers), although it did come with another film on the same disc, a found footage film called The Dyatlov Pass Incident, but I’m not sure if this is only on review discs. The trailers were for The White Queen, Phantom, I Spit On Your Grave 2, and Blood of Redemption.