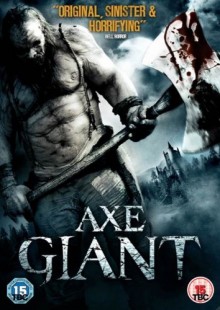 So, guess what Axe Giant is all about! That’s right, a freaking giant with a big ass axe. B-movie insanity, hilarity and, come the final run, drudgery collide in this awfully awesome low budget schlock fest that does exactly what it says on the tin: a giant with a massive axe kills people. Paul Bunyan it seems was born a freak of nature, grew to giant size, fashioned a giant axe to kill people with, lived to over a hundred years old and resides in a cave in the woods. Eternally pissed at those who killed his beloved Blue Ox (!) he sets his sights on a group of juvenile delinquents, out in the woods on a boot camp like retreat, who have desecrated the grave of his treasured ox: silly juvenile delinquents! To which follows a surfeit of dismemberment, shoddy special effects and general B-movie madness.

For most of its running time Axe Giant is a B-movie hoot. The set up is simple, there’s a silly back-story introduced to give some semblance of a reason why a giant axe–wielding Paul Bunyan is running around in present day and there are plenty of disposable characters to be sliced and diced in ever increasingly inventive and gory ways. The juvenile delinquents aspect makes a nice change from the usual bunch of teens going off in to the woods to party and the young actors are mostly likeable, rather than the annoying douchebag stereotypes that seem to clog up horror and teen films today. We spend a little time with them before the giant with an axe shows up and then it’s axe slicing, gore mayhem from there on out. 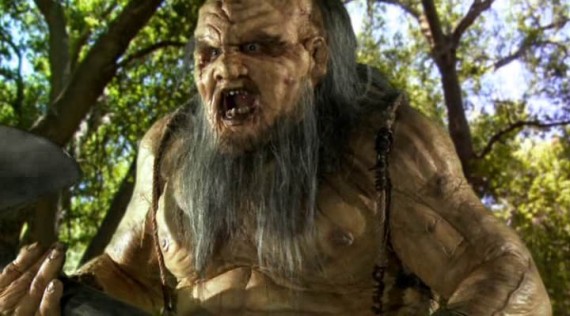 The gore and chopped off limbs are piled on with aplomb with people cut in half, stamped on and carved up in various inventive axe slicing ways. Plus any film that opens with Grizzly Adams/Repo Jake star Dan Haggerty getting his head sliced open by a deformed Paul Bunyan with a massive saw knows its audience and delivers much the same for the rest of the running time. Unfortunately it runs a bit out of steam come the end, the effects budget failing to keep up with the director’s imagination with shonky CGI rearing its ugly head (though the gore and giant effects are pretty good for a low budget film) and the tone perhaps becomes just a little too serious for the type of film this is (though chuckles are assured every time the giant “roars”!). Still, there is a rampaging giant, a huge axe and plenty of heads being severed meaning Axe Giant delivers gory bonkers B-movie fun for the less pretentious film watcher.