Sinister has just been released on DVD and Blu-Ray in the UK and I was kindly sent a screener to review. Looking back at Jonathan’s write-up he shares my opinion of the film, so rather than put together a probably less extensive review saying the same thing I thought I’d repost his review. Lazy on my part perhaps, but at the bottom I have added my thoughts on the extensive special features included on the Blu-Ray edition. 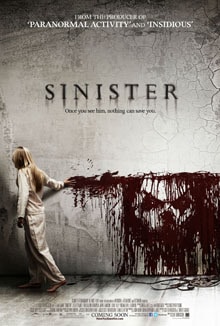 Sinister kicks off horror season in October, providing an interesting blend of creative talent from the “disturbing” end of the spectrum. In a year when horror seems destined, and perhaps desperate, to add on extra dimensions (Silent Hill: Revelation, The Hole, and Resident Evil: Retribution are all in 3D – goggles at the ready people), Sinister seems poised to go in the opposite direction, dialling back the trying-too-hard in favour of a more classical approach. In this respect, Sinister has an interesting pedigree: the film is written and directed by Scott Dellickson, of chilling hit The Exorcism of Emily Rose and thinky science fiction The Day The Earth Stood Still, and produced by Jason Blum, the force behind the nu-horror micro-budget series Paranormal Activity.

As a result Sinister promises to be, at least potentially, something new. If not nu-horror with deeper narrative intentions, then at least a supernatural found-footage film with a glossy budget and some thinking-man’s substance to support it. A mix of what makes Paranormal Activity so popular with, and no disrespect intended, a traditional story, score and stars to boot. 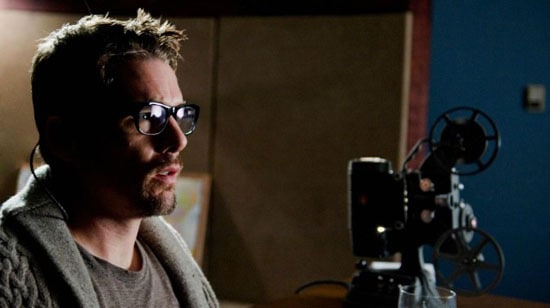 After a very creepy introduction – the silent, middle distance Rube Goldberg hanging of a family from a tree shown on a quietly ticking super 8 film – the stars to boot come in the form of known-face Ethan Hawke (Gattaca, Training Day). Hawke plays troubled true crime writer Ellison, whose one hit book has long since passed, and been followed by a string of iffy so-so-ers. Ellison is so concerned for another hit that, to investigate his next true crime, he has uprooted his family and moved them into the same house as the unsolved crime itself. The crime, of course, being the aforementioned family hangings and the mysterious disappearance of their little girl. Awkwardly for Ellison, no one seems pleased for them to be there. Not his obliging wife, not his two children and not the local police, who dislike their investigations being probed for another man’s profit. His only ally is an awkward young police sergeant and true crime fan, but Ellison is initially quick to dismiss him.

Of course Ellison also hasn’t told his family that the tree in the garden is the very same from which the bodies were found dangling. So from the off it is plain that the true crime writer is a man riding for a fall.

The house and garden are still carrying the dark atmosphere of the super 8 opening when Ellison finds a box of super 8 films in an otherwise empty attic. Initially the films appear innocent enough. Family barbeque. Garden party. However as he plays through each of them, Ellison discovers more chilling, matter of fact family killings, each perpetrated and filmed by some unseen hand. Graphically simple, and to the tune of a spinning super 8 projector, these killings bring the Paranormal Activity side of Sinister’s creative marriage to the screen, and are genuinely disturbing. 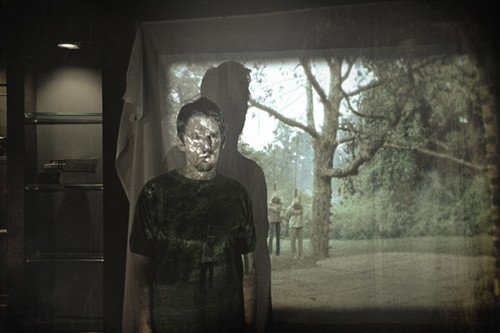 As one may expect, the frights stack up at a similar pace to the personal stakes being raised. First the book must be a success for the sake of Ellison’s financial future, then his family’s future, then for the sake of his marriage. Under the weight of all the fright and pressure, Ellison fails to hold himself together. On the one hand this is the case that could make him big again. On the other, the terrors in the house are driving Ellison to drink, and paranormal dangers are becoming less fanciful by the day.

However, if the effect of the sinister super 8 films is particularly terrifying, the jumps around the house – and there are many – are generally much cheaper. Most, in fact, involve something jumping out at the screen after a prolonged buildup, accompanied by sudden music sting. Ellison is also frustratingly allergic to putting the lights on. On one occasion he is legitimately hampered by a power cut, however the rest of the time he seems happy to creep-up his digs with a solitary desk lamp that shadows the rest of the room in “was-that-just-something?” darkness. While this adds to the mood, when added to the cheap chill count in Sinister, it is slightly disappointing. Just-there-for-the-scare elements extend to the plot and characterisations too, with an entertaining and spooky “night-terrors” son, having served his purpose of arching his way out of a box (and onto the trailer), dropped from story after about halfway.

Non-horror elements also suffer from an awkward thinning. Dotted across the story are several melodramatic-moments-on-cue between Ellison and his wife, many of which contain noticeably underwritten dialogue (Ellison’s wife is played by relative newcomer Juliet Rylance). Even the potential boogie-man mythology is effectively dropped in, with the necessary exposition outsourced to a mythology professor on Skype. In combination, this all suggests that the story in Sinister, despite its potential, was still developed scare first, story much later, which threatens to be disappointing. 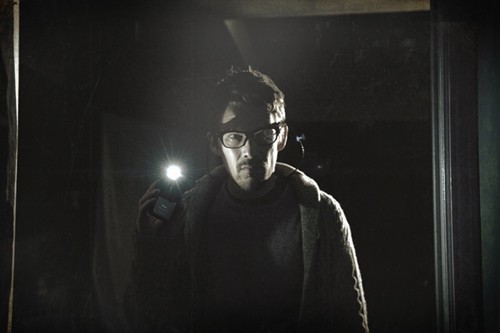 That isn’t to say that Sinister isn’t scary. Sinister is frequently and genuinely hard and uncomfortable to watch for all the good horror reasons. However, without enough story, once the scares start getting desensitised Sinister regrettably lacks another gear – or layer – to go into. Instead Sinister’s progress as a tense mystery is slowly eroded by its own revelations, and the lack of strength in Ellison means his character struggles to step into the void. Without any apparent means, or will, to fight back – or even attempts by Ellison to find out how to fight the possible evil that is stalking them – Sinister suddenly begins to run long, leaving little to engage except to wonder “how will it end? And then go through the motions to find out.

When it comes the ending is neat, but fairly abrupt and containing little surprise. Bundle it all together and Sinister’s concept and characters are good, but not quite enough to carry the weight of a truly excellent horror. Among other things, it misses the thrust and parry of an interesting man desperate for survival. Ironically then, for a rare 2D horror this season, it is the lack of extra dimension that makes it miss its potential, instead gradually reducing Sinister to a melodramatic folk tale. However, it is a truly…well sinister melodramatic folk tale, and any shortcomings don’t change the fact that Sinister starts strong, that its scares are legitimately jumpy, and that its ideas and Super 8 footage, if not its entire execution, are genuinely chilling.

So while it may not live up to all it promised to be, Sinister certainly gives horror fans something moody to experience. If nothing else it also lives up to its name as Sinister turns out to not only be its title, it is also – no more and no less – its most apt description.

Sinister is out now on DVD and Blu-Ray, released by Momentum Pictures. I watched the Blu-Ray version and the picture and sound quality is superb, with the incredibly dark, minimalist cinematography and fantastic use of abstract music coming through wonderfully.

In terms of special features it’s a decent package. There are 3 featurettes, which are all a little unusual. Rather than the usual backslapping talking heads affair discussing the making of the film, these featurettes are all short pieces looking at topics linked to the film. So we get a feature on ‘True Crime Authors’, which is brief at 9 minutes, but actually quite interesting, including some shocking crime scene photos from the infamous Black Dahlia case. Next up is ‘Living in a House of Death’, which looks at people that choose to live in houses where murders have taken place, specifically focussing on the ‘Villisca Axe Murder House’. This was the scene of the grisly murder of a family and a number of other young children also in the house way back at the turn of the 20th Century. The house was bought by an elderly couple more recently and they have turned it into a museum where people can choose to stay the night and experience some spooky goings-on. The final featurette is a fluffy promo-piece called ‘Fear Experiment’ which has some ‘scientists’ measuring the fear of some members of a Sinister screening audience.

The main reasons to buy this home entertainment release though are the commentaries. You get two, one with director Scott Derrickson and another with Scott again, this time with co-writer C. Robert Cargill. These are both excellent listens, being clear, informative and without any lapses of energy or content. The duo track gets a bit self-congratulatory at times (they claim they shot a ‘Coen Brothers scene’ in the meeting of Ellison and a hapless police detective – I don’t think so guys) but in general it’s very interesting with a lot of talk on the craft of putting the film together.

So although the film isn’t without its flaws, it’s certainly worth a watch and will put shivers up the spines of all but the most ardent of horror fans and the DVD/Blu-Ray package is strong enough to warrant a purchase for anyone curious or tempted to pick it up.