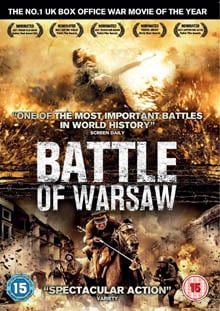 When I heard about this film I assumed that it would be set during the Second World War. I was wrong it seems and had an impromptu history lesson.

The battle that this film refers to was during a conflict I never knew ever existed. After the First World War and the rise of Soviet Russia, the Bolsheviks from Russia set about trying to bring their revolution to the rest of the world. They planned to do this by at first invading Poland before moving on to Western Europe. In fact the full name of the film is Battle of Warsaw 1920, which would have cleared that up if I’d known.

The film is the story of two lovers, I’d call them young but they don’t look it. Ola (Natasza Urbanska), I would say is in her late 20s, Jan (Borys Szyc) looks more like he’s in his 30s. She is beautiful and a dancer in a nightclub, he, well I’m not sure what he was before he joined the army and isn’t what I would call classically handsome.

The couple get married and Jan goes off to the front. Here things, as you can imagine, don’t go to plan and Ola is left back at home not knowing if her husband is still alive. 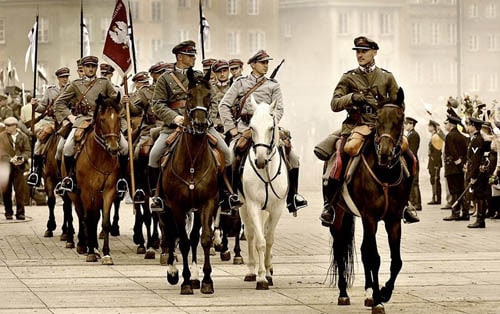 Although there is much to like about Battle of Warsaw there are a few things that just jar. One is just before the aforementioned battle, that is the culmination of the film, and is where, all of a sudden, you get a blast of music that is clearly there to show that it’s a dramatic moment. The trouble is it sounds really out of place and as though the director took it off some stock sound effects CD.

Then some of the sets look really cheap, especially the cabaret where Ola works. This is probably because they spent so much of their money on the huge cast of extras and the very good battle scenes. The trouble is though that it does let the film down.

My final gripe are the actors who have clearly been made up to look like the Polish leaders and Lenin and Stalin. They are OK, but not that great and you really don’t engage with them and they seem as though they’ve just stepped out of some political farce and are hamming it up a bit.

These criticisms aside, there are things to like about Battle of Warsaw. The end battle is very well done and shows the brutality of the war. How they got quite so many horses together I don’t know.

If like me you like your war films then this will be, on the whole, enjoyable to watch. It’s not the greatest ever made, but it did fill in a gap in my Polish/Russian history.