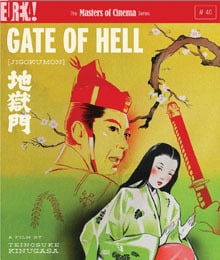 I must admit I hadn’t heard of Gate of Hell (a.k.a. Jigokumon) or its director Teinosuke Kinugasa prior to getting a press release about this new dual format Blu-Ray & DVD of the 1953 Japanese film. With the track record of Masters of Cinema and my love of period Japanese films I didn’t hesitate to give it a try though. Looking up more information about the film to prepare for this review, it seems to be quite the lost classic. The first colour Japanese film to be noticed in the West and released hot on the heels of popular Japanese titles from Mizoguchi and Kurosawa, Gate of Hell went down a storm, taking home top prizes at Cannes, the Oscars and the BAFTA’s. The director had already made a name for himself in his home country though, directing films from way back in the 20’s to great success. In his early days he was renowned for making experimental films, but as he grew older, and as this film shows, he eventually moved towards period pieces which were popular at the time.

Gate of Hell begins in breathtaking fashion with an attempted coup taking place within the palace walls. To protect the lord’s wife from harm amidst the chaos, fearless samurai Morito (Kazuo Hasegawa) takes a decoy, Lady Kesa (Machiko Kyô), out of the city to draw the rebels’ attention away from the real lord and his family. This excitement abruptly ends however as the troubles are dealt with and peace is restored. The film then makes a drastic change in tone as Morito requests his lord reward his loyalty with the hand in marriage of Kesa. He cannot grant such a wish though as the lord tells Morito that she is already married to a fellow samurai, Wataru (Isao Yamagata). From here on the film becomes a dark tale of violent passion as Morito tries everything in his power to win over the heart of Kesa. 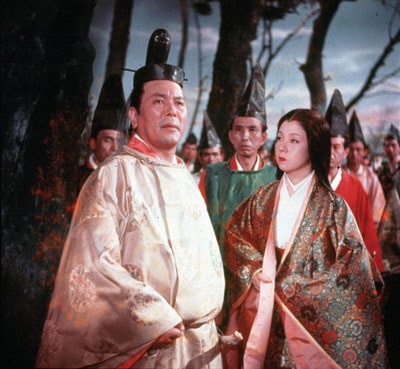 This huge shift in the film makes for a surprising and original experience, even if many elements aren’t all that new in themselves. Plus, there are still a couple of exciting action tropes thrown in as the melodrama takes over (a dramatic horse race for example) and the story takes what seems like a forgettable tale of unrequited love into rather dark territory as it moves on. The shifts are handled very effectively too, other than maybe the moment when the feudal battle is tied up in seconds via a voiceover and picture-scroll. Its mix of melodrama and action actually reminded me a lot of the epic blockbusters of Hollywood’s glory days where films like Gone With the Wind would combine war-movie thrills with romance and scandal. The bold use of colour was another reminder.

And what use of colour.

It’s clear to see why this turned so many heads back in the 50’s. The film is staggeringly gorgeous. The vivid use of colours, particularly reds and greens, pierce through the screen. Although early scenes in particular are fairly garish (but beautifully so) the film also knows when to tone things down and there are a number of dark night scenes and muted pastels on show too, which look equally fantastic. Plus Kinugasa’s use of depth and beautifully composed wides are as striking as the colour palette. It truly is one of the finest looking films ever made and I’m so glad I saw this on Blu-Ray first rather than making do with a VHS or DVD version.

Beyond the cinematography, production design and interesting mix of genres Gate of Hell isn’t quite as refined as the work of some of the Japanese greats, with much of the drama coming across as stagey and the action lacking the punch of Kurosawa’s work. It certainly lacks the subtlety of Ozu too, but the film is so successful in those aforementioned areas that it is certainly something that demands to be rediscovered and remains a thrilling piece of pure cinema.

Gate of Hell is out in the UK on 3rd December on dual format Blu-Ray & DVD, released by Eureka as part of their Masters of Cinema Series. I watched the Blu-Ray edition and wow, this has to be the transfer of the year. The colours are so rich and the detail incredibly strong. Despite being almost 60 years old, the film looks spotless (without looking artificially scrubbed). Audio seems strong too – a couple of moments seemed a bit echoey, but I think that was as originally intended. There are no special features, but with such a relatively rare film looking this good on Blu-Ray you can’t argue. Plus, you still get the standard booklet which is an interesting read as always, satisfyingly replacing an interview or featurette, even if it’s a little shorter than usual.