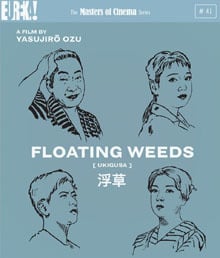 For me, 2012 has been a bumper year for Yasujirô Ozu films. Previously I’d only seen Tokyo Story and Late Spring, but early in the year The BFI released a set of four of his early student comedies and then followed that with a three film set of some of his classic melodramas. Just as the year is drawing to a close, Masters of Cinema have joined in on the action too (probably not the best phrase to use when discussing Ozu) with a handsome Blu-Ray release of one of his last films, Floating Weeds.

Beginning with a travelling theatre troupe coming to a small seaside town, Floating Weeds looks at the complicated relationships between the group’s members and the local residents of the town as the actors live there for several months. The story largely concerns itself with the troubled ‘family affairs’ of the master of the group, Komajuro (Ganjirô Nakamura), who we learn has brought them there so that he can spend time with his illegitimate son Kiyoshi (Hiroshi Kawaguchi). Komajuro has hidden the fact that he is his father for years (Kiyoshi is now in his late teens) as, beyond the scandalous circumstances of his conception, he feels that an actor is not a respectable enough father figure. When Komajuro’s current mistress Sumiko (Machiko Kyô) learns of this and the fact that he has been visiting with the boy’s mother, Oyoshi (Haruko Sugimura), she plots to ruin this family unit by bribing the insalubrious Kayo (Ayako Wakao) to seduce Kiyoshi. 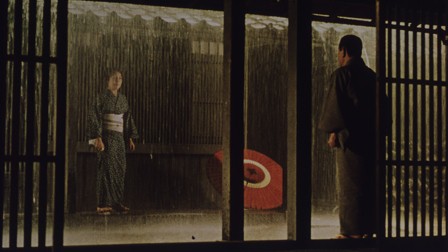 Ozu was a master of the family melodrama and, without wanting to undermine the quality of this beautiful film, this is more of the same from Japan’s great cinematic figurehead. As ever, the film exudes humanity from every pore. Characters feel real and emotionally complex without forcing this idea upon the viewer. They are flawed, but all the more interesting to watch for this very reason. As usual, most of the film unfolds in ‘around the table’ informal chats filled with small talk and pleasantries, with much being said ‘in-between the dialogue’ or in short sharp outbursts that prove all the more effective due to the surrounding restraint. The most powerful of these uncharacteristic moments here is a rainstorm-set argument between Komajuro and Sumiko where they each stand on either side of a rain-drenched street, a red umbrella separating them in the frame.

Speaking of ‘the frame’, you can’t really talk about Ozu without paying reference to his composition. After reviewing a number of his films this year I don’t want to sound like a broken record, but Ozu’s framing and handling of mis-en-scene is a joy to behold. He’s up to his usual tricks – low, static camera positions and unconventional head-on close-ups, but you can’t call it lazy when everything is so carefully constructed and meticulous. His imagery has a beauty that is hard to express. He doesn’t use elaborate lighting techniques or big, bold Leone-style perspective-trickery, he instead employs a simplistic elegance that is quietly stunning. One of his few films to be shot in colour, this technique is well-employed too, with a combination of the cloudless blue skies, colourful costumes worn by the troupe and flashes of red and blue in the banners and posters around the town. 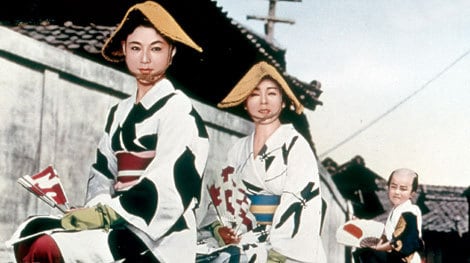 Away from Ozu’s familiar but expert technique, Floating Weeds distinguishes itself from some of his similar work in a couple of ways. For one, the first third of the film tricks you into thinking the film is a densely packed, multi-character ensemble piece, but, although there are a wealth of sub-characters, the story eventually settles and focuses on the core dynamic between Komajuro and his ‘family’. This brings an interesting structure to the storytelling and gives the protagonists breathing room. Added to this, Ozu also employs a lighter tone to much of the film, when compared to the more melancholic Tokyo Story and other titles of the period. This lightness of touch does drift away as the drama takes over in the final third, but overall it’s a breezier watch than usual and I found its slow pace less noticeable than before.

All praise aside, it doesn’t quite rank as highly as some of his other work in my eyes though. It still puts the majority of melodramas to shame, but I found it less affecting than say Late Spring or Tokyo Twilight. I found some of the later scenes of confrontation less subtle than I have come to expect from Ozu too and the climax wasn’t as satisfyingly well handled as I’d have liked. Still, these are lesser faults than perhaps they sound – if it was from another director I’d probably have gone easy on them, but with a year full of reviewing his films and the high regard he is held, a little nitpicking is acceptable.

Floating Weeds is out in the UK on 3rd December on dual format Blu-Ray & DVD, released by Eureka as part of their Masters of Cinema Series. I watched the Blu-Ray edition and the transfer is great as always. I did get some slight digital grain issues once or twice in the clear blue skies and the occasional white shirt, but this may be an issue with my player or projector as I notice it quite often in Blu-Rays through that system. Audio is solid too.

You only get a trailer as an added extra, but as usual you get a booklet included in the package which more than fills the gap.