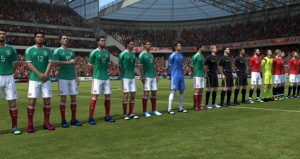 ‘Good evening one and all and welcome to Football Matters. My name’s Gary Spinnaker and tonight I’m joined by our resident fonts of knowledge, the ever tanned Mark Lorra-sun and window botherer Alan Handsome. Good evening gentlemen.’

‘Well, we’re a month into the season so far and, once again, it already looks like just a two horse race. EA Sports’ Fifa 13 and Konami’s PES 2013 battling it out head to head as usual. I can’t see much in it this year though guys, so let us know what you think. Let’s start with the graphics, in particular player likenesses. Mark, how do you think the two match up?’

ML – ‘Well Gary, everybody knows that great graphics don’t make a game, but they do help. The likenesses of some of the top players is amazing this year, some real stunners in there.’

AH – ‘It’s getting ridiculous. In our day you had 64 polygons for your face and you made do. You got what you were given and that was that.

All these demands you hear from players these days, clauses in their contract saying they want 1200 polygons for their face, 500 for their hair and 150 for their backside, the whole thing’s ridiculous.’

GS – ‘Like it or not though, it is a part of today’s game, and while they’ve both made some outstanding likenesses, I think it’s PES that has gone the extra yard with lesser known player’s physiognomies. There’s definitely strength in depth there.’ 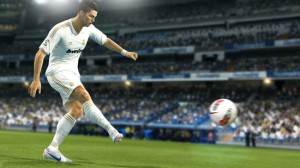 ‘How about game modes? Alan, we’ve all seen before how hard it is to strike a balance between how many game modes there are and just how good each one is. What are your thoughts?’

GS – ‘OK, can we just leave your day in the past and talk about today, sorry.’

AL – ‘Fine, suit yourself, well it’s always been the case with EA and any of its sports titles that they lay on as many game modes as possible with each update. Talk about overkill, but they really seem to have filled out each one significantly this year. Manager mode, Season Mode, Fifa Ultimate Team, I could go on…’

AL – ‘Fair enough, it’s a great exclusive, and for authenticity you can’t match it, but we’re talking about video games here and the sheer breadth and depth of game types in Fifa surely has this one wrapped up. Champions League is great licencing but it doesn’t add to gameplay.’

GS – ‘OK, fair enough, Fifa looks stronger in this department. So with the mention of licencing, we all know that Fifa holds most of the aces in this department. It might be unfair to keep comparing the two, but just how important do you think licencing is in a game. Alan?’ 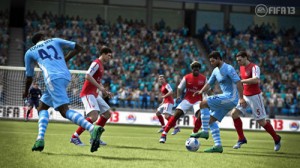 ML – ‘He’s got a point Gary, and you’re right that the EA money men have got it all wrapped up when it comes to licences, but PES does have an edit mode…’

AL – ‘Edit mode? Don’t make me laugh. They’ve only got Manchester United licenced in the Premier League for crying out loud. That’s 19 other teams where you have to edit team names, player names, stadium names, and that’s just one league! Plus they don’t have Championship teams or League one or two…’

GS – ‘Strong words, but some might say justified. We think it’s up to you the player what you’re prepared to do in order to fully enjoy the game of your choice. It is easier to take the Fifa route, but if you’re a brand loyal PES gamer, it’s only a few hours of work to get that same level of authenticity, just don’t forget to save.’

GS – ‘Stay where you are mate, we’ve only just reached the most important bit: gameplay.’ 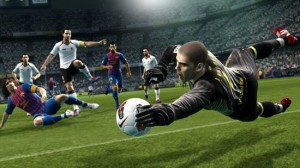 GS – ‘To be fair, Mark, you may know your onions, and the bags they go in, but the three words in three sentences summarisation that Alan’s made so famous is legendary, plus he does have a point.’

‘Fifa this year, more than ever on this current generation of consoles, is by a long way the more arcade orientated player. There was a brief period around 2008-09 where Fifa became the more realistic player while PES took the arcade route but they seem to have settled back into the roles they held back in the days of PS2 and original Xbox.’

‘Which you find the more enjoyable comes down to the kind of game you want to see played out in your own home. What I think we can all find encouraging is that both games do what they do extremely well.

The player on the High Street has, more than ever, a clearer picture of what to expect from each game, how that matches what they expect from a console footballer and that surely can only be a good thing.’

Gents, it’s been a pleasure as always. Thanks again for your valuable input and I’ll see you next week.’

ML – ‘What are we going to talk about next week?’

Written by MarketZero for BCS