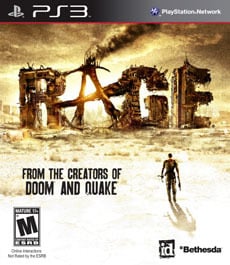 Fast paced, all out action that is up front and in your face with an underlying clever structure in place behind it. Rage has tried to create an artistic masterpiece, but is this alone enough to keep gamers entertained?

When I first picked up a copy of Rage and looked on the back cover I was expecting a slightly more aesthetically pleasing version of other recent FPSs. However, given that it was made by the world renowned id Software I was very hopeful that this was going to be a hit for sure.

At first glance I had my suspicions slightly confirmed and as you follow through Rage you can’t help but get immersed in the game. Rage is set in a post apocalyptic era where there are mutants (those contaminated during the apocalypse) and surrounding colonies of humans trying to survive through by way of trade and fighting off rebels where needed.

Your character is almost a hybrid result where you obtain certain ‘power ups’ that can be identified such as a built in defibrillator. However, this feeling of immersion and addictiveness does slow down and you can’t help feeling that there are certain elements missing and that you are starting to see the same thing over. Even if the diligence of the surroundings are something to behold and the environment is extremely interactive you still can’t help but wonder where certain parts are.

On my play through of the game, I started to notice that elements of the game were starting to become over familiar fast, even faster than what you would expect from a budget FPS. For instance, when you defeat one of the game’s strange enemies you are unable to pick up the weapons that they are using. Another is that as beautiful as the game is, you soon start to tire of seeing the same recycled scenery over and over again, this goes for the enemies in this game too. 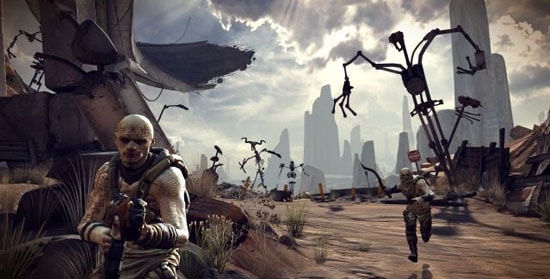 Although, there is a structure of the story in the background where you can have multiple tasks assigned to you at once always keeps your mind occupied. The game can be played through end to end by doing the least amount in approximately 12 hours. There are plenty of items to build along the way such as, modifying your weapons to make them better and explosive remote controlled cars to name a couple.

For example, you may have picked up a normal pistol, but when you combine this with half a telescope and some Fat Boys slugs, which are oversized rounds you have a serious killing machine ready to go. There are a great range of weapons in the game from crossbows that shoot electrifying bolts, to rocket launchers to take out the enemies. What makes this selection better is that you can buy plans and pick up materials throughout the game to make these weapons even better!

The same goes for the vehicles that can be obtained throughout the story. These vehicles that transport you across the waste land can be modified to fit different weapons and even go faster. You start off on a quad bike before you obtain a dune buggy with mounted machine guns or rocket launchers and then you have an armoured vehicle with both, to make you king of the wastelands.

A lot of gamers have compared this game to Fallout and Borderlands and on first look, yes there is a distinct similarity, however, once you get in to Rage, the textures become deeper and the level of detail is much more than previous titles have achieved.

id Software’s really thought about the gamer when it comes to extra activities while you are messing around rearming in the village of Wellspring. There are pub games to play such as cards, racing to win money to upgrade your vehicle and also Mutant Bash TV where you have the pleasure of using your arsenal to destroy as many mutants as you can for survival. 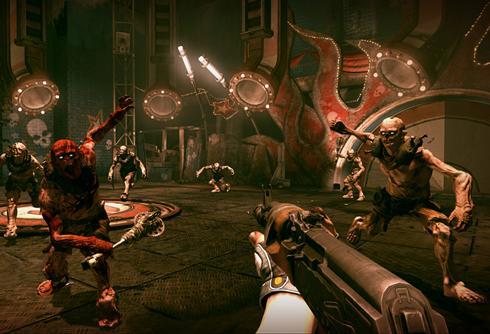 The biggest part of the game I felt could be improved, like any gamer I should imagine, is that there are no auto save or checkpoint functions. Instead you have to manually save at regular intervals which, for a game released in late 2011, this has almost gone back in time.

If you are in the middle of a mission and you completely die (not just defib stage) you will be loaded back to the previous checkpoint, which could be half way across the other side of the map. Annoying to say the least for those who are going to play this on any sort of challenging difficulty.

So, on to the multiplayer function, there are two modes of multiplayer; the first is co-operative where you can go off and complete side missions. The second is a heart racing, up to six players, race for life where you go as fast as you can around the track blowing each other to smithereens.

This is a great part of the game, but again it seems to lack something more in the way of multiplayer battles etc. If there were more multiplayer features built in, this game may have scored higher with gamers and sold more titles as a result.

If you are a someone that is looking to play through a rather strange yet engaging story then Rage will certainly occupy your time. It is a little repetitive, but I feel this can be overlooked given the amount of detail that has gone into the game throughout. Given that this title has been reduced so greatly recently, I would say it is definitely worth picking up and having a play through.

Rage offers something for every gamer, whether you want to kick down doors with all guns blazing, build weird and wonderful inventions or like the little quirks and challenges the game has to offer all the way through.

The game has great aesthetics and makes you think in places, which you wouldn’t expect from your typical FPS. Rage has most certainly distinguished itself as unique from its competitors, however, a few extra features would have made all the difference to this great game.

Review by NaffiBoi from BCS