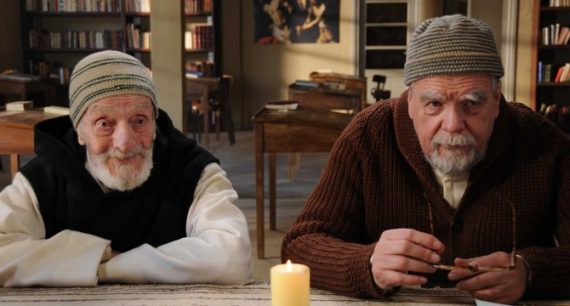 Last week, I didn’t see any new releases at the cinema. I went to see a double bill of “Little Shop of Horrors” and “The Rocky Horror Picture Show” which left me with a massive smile stretching from ear to ear, but no new releases. Nothing took my fancy. It was all rubbish.

I did, however, finally catch Xavier Beauvois’ “Of Gods and Men” on DVD. I’d heard nothing but good about this film since the initial reviews came in at the end of last year, and before that I knew of it from having won the Grand Prix at Cannes. Incidentally, £5 on Malick’s “Tree of Life” to scoop the Palme D’Or this year. But I digress.

As I was saying, I watched “Of Gods and Men” and thought it was absolutely tremendous. Not only was it technically superlative, exquisitely acted, subtly directed and sublimely photographed, but the story itself touched on a hugely important theme that seems to be going out of vogue in our current global socio-political environment. Spirituality is certainly not the easiest, or the most accessible, element to broach in cinema or indeed in any artistic medium, but it becomes even more difficult to come to terms with when a story depends on eliciting an emotional response from the audience based purely upon the supreme triumph of faith over human tragedy. The reason this is so hard to make powerful is that it flies in the face of potential collective scepticism on the part of the audience, who could easily not share the strong spiritual convictions of the film’s characters.

Let me give you an example. I’m a theist, but I’m not religious. I’ve never been drawn in the slightest to committing myself to any religion because I cannot come to terms with the inherent hypocrisies in any religious dogma. I’m of the opinion that my life is mine to live, and I’ve had the appropriate moral education to live in a good and decent manner: I simply don’t need an archaic set of rules to tell me how to conduct myself personally and socially in the ever-changing modern world. But I do believe in God. Not necessarily the Christian God, or Allah, but in the existence of a higher power that has created mankind and the universe, and has left us to our own devices to try and elevate ourselves to a kind of divine understanding of our existence. To me, this belief is behind the creation of all great works of art: it is the attempt of mere mortals to reach a kind of transcendence by hitting upon something genuinely profound about the human race. I cannot reconcile myself to the presence of art in a godless world, because what else is the motive? The answer is of course money, and I’m too much of an idealist to accept that as the supreme motive behind human activity. I am only 21 after all.

So my belief in the existence of God does give me a helping hand into understanding why the monks in “Of Gods and Men” are able to respond to the terrorist insurgence in their country as they do, but is it as easy for atheists to understand their decision, especially in world which is becoming increasingly cynical and sceptical about religious matters. Not only is atheism stronger than ever before now that our more liberal and free-thinking times have rendered it a more acceptable response than in any other historical period, but the reality of the twenty-first century world is that religious fundamentalism is as dangerous and controversial as it has ever been. The truth of Islamic terrorism is, although it is being perpetrated by deluded zealots interpreting a holy text according to their own hypocritical political rage, that it has created a climate where it is easy to doubt that conviction to a religious faith can be fundamentally selfless and morally good. Add to that the utter turmoil that is the Israel/Palestine conflict, and it all amounts to a pretty bleak and damning picture of the damage religious conviction has done to our world.

This is all the more reason why a film which portrays faith and spirituality as a force of strength and righteousness in a society ripped apart by religious turmoil, such as in “Of Gods and Men,” is so important in this day and age. It’s a major concern of the film that’s as crucial to each individual scene and nuance of character behaviour as it is to the central drama of the story. I’ve been in church ceremonies and have always been left cold by choral song: it has always seemed to me to be too superficial, aurally beautiful but without any real thought behind the actual words so forcefully chanted. However, the scene when the Monks place their arms around each other and sing with all their hearts and souls as a terrorist helicopter circles overhead is a moment that validates the enormous power of their unified collective voice, and of the immense beauty of the words and sounds of the divine. The scene when the Monks listen to Tchaikovsky’s “Swan Lake” score is one of the most moving sequences of film I’ve ever seen. There’s no dialogue, just gentle edits between the faces of the Monks, as they are visibly deeply affected by the haunting grace and beauty of the music. Its transcendent stuff, and it links directly to what I said about how I see the role of God and art: to be listening to such an astonishing piece of music is in some ways to be in the presence of the divine. As you can probably tell, the film has lingered in my mind in quite a profound way: the story of the Monks’ commitment to their divine duty in defiance of oppression, giving them the resolve to face their own martyrdom to the eternal shame of the terrorists, is a grand testament to the triumph of the human spirit when supported by faith.

Indeed, the act of characters drawing upon their often questioned faith to recover the good in themselves, or to make a spiritually victorious stand against the forces of darkness, has paved the way for some of the most powerful and moving scenes in cinematic history. This is evident in films as diverse as Beauvois’ serene drama and Abel Ferrara’s extremely tough and hard-hitting character study “Bad Lieutenant.” The film sees Harvey Keitel, in his greatest performance, play a horrifically flawed and amoral corrupt detective who is offered a chance for salvation when he takes the case of a nun who has been brutally raped on a church altar. Unable to understand how the nun can forgive her attackers, Keitel is visited at the scene of the crime by a vision of Christ, and in perhaps the most uncomfortably raw and intense piece of acting I’ve ever seen breaks down and confesses his sins. The irony of the scene comes when we see that what the lieutenant believed to be Christ was actually a confused churchgoer: his penance ultimately has to be accepted by the streets he’s terrorised rather than by the son of God. Nevertheless, the recovery of his Catholic guilt and the way an apparent encounter with the Saviour so completely obliterates the lieutenant’s dark addictions is a visceral example of the effect of strong spiritual conviction on the individual.

No director in the history of cinema was more preoccupied by the power of God, and his apparent absence from our contemporary reality, than Ingmar Bergman, but in his most famous film “The Seventh Seal” we see the director’s strongest vindication of the power of unwavering faith. Max Von Sydow’s returned crusader looks by the end of the film to have lost his duel with death in every possible way: the chess game with his life as the prize is nearing its inevitable checkmate, and along the way he has seen the unremitting horrors sweeping his homeland in the name of the Lord, from a band of flagellants to the pagan witch-burning. The Knight’s faith, resolve, and belief that God will deliver the righteous from this suffering, however, ultimately sees his grand gesture of selfless sacrifice rewarded: as he accepts defeat in the chess game, and commits himself into the care of death, he allows the two travelling performers to escape with their young child, and continue to live their life. The act affirms a spiritual strength and compassionate humanity which trumps Death’s wry cynicism.

To believe in God, in my opinion, is to believe that even with our deaths and overwhelming act of good, or defiance of tyranny and evil, can be attained. This indeed is the metaphor behind the Crucifixion: that through the suffering and death of Christ mankind can be brought to salvation. And in a world where it is becoming increasingly difficult to see humanity in these terms, a film like “Of Gods and Men,” which although tragic is a testament to the noblest kind of courage, fortitude and selflessness, is nothing short of a divine miracle.