The Princess and the Frog is Disney going back to it’s roots. Shunning 3D and sticking to old fashioned hand drawn animation (with a lot of help from computers I imagine) and employing the writer/directors behind The Little Mermaid and Aladdin, this really feels like a proper Disney film after 10 years of trying to be ‘down with the kids’ Buy Orlistat Online Pharmacy No Prescription Needed or struggling to keep up with Pixar’s standards. Yes the film has a hammered home message and it’s share of cheese, but it’s presented in a refreshingly non-ironic, wholesome way that feels acceptable. It doesn’t try to be anything else other than an entertaining family film packed with great songs, simple humour and a few frights to keep everyone excited. There are no lazy film or TV references ala Shrek, no over-pandering to adult audiences and no saccharine pop ballads. It whizzes along and leaves you with a big smile plastered on your face, which is exactly what I want from a Disney film. It’s no Lion King and it has it’s issues, but overall The Princess and the Frog is top-notch entertainment and shows that there’s life in 2D animation after all. 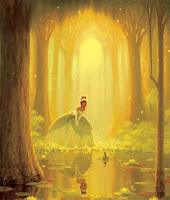