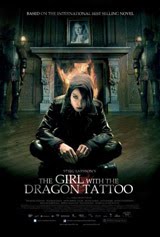 The Girl With the Dragoon Tattoo is a consistently engrossing thriller which starts off feeling like something fairly conventional, but draws you in incredibly deeply and adds layers of darkness and character development often lost in general Hollywood fare. The side story (if you can call it that) involving Lisbeth Salander (brilliantly played by Noomi Rapace) is especially shocking and fascinating. The filmmakers don’t put a foot wrong for the most part, keeping the viewer on the edge of their seat despite a fairly leisurely pace. The only place that I felt they stumbled was in the last 15 or 20 minutes when the film ties up all the loose ends. It’s clearly important to do so, but the preceding 2 hours are so slow burning and dark it makes the rapid and straightforward coda seem out of place, especially since it’s stretched out for a fairly long time after the dramatic climax of the film. For the most part this is excellent stuff though and is highly recommended.