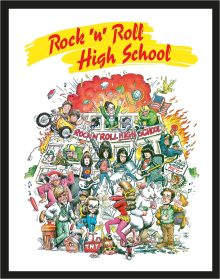 Roger Corman has a curious place in film history. As a director and producer, he made a lot of films very quickly, very cheaply, often hiring young, inexperienced crews with the understanding that their creativity and enthusiasm would help compensate for the lack of time and money. From Francis Ford Coppola to James Cameron, an impressive list of future A-list directors got their starts working for Corman. But few of them claim that his low budgets and insistence upon easily exploitable subject matter enabled them to do their best work. Often, Corman’s films are as interesting for who made them as they are for their actual content.

Rock N Roll High School ultimately falls into that category, although its ‘try anything’ invention occasionally pays off. The production is littered with names both in front and behind the camera who would go on to do better things: Joe Dante; PJ Soles; Clint Howard; Joseph McBride; Jon Davison; Paul Bartel; the Zucker brothers did some second unit filming. Writer/director Allan Arkush never quite made the movie A-list (his most high-profile credit is Caddyshack II), but has enjoyed a prolific career directing episodic TV. In the late 1970s, Arkush was on the fringes of Corman’s operation, making one ultra low budget feature with Dante (Hollywood Boulevard) and helping save another production (Deathsport) that had gone awry. That put him in a strong position to pitch himself to direct Corman’s latest project, tentatively titled Disco High. With his usual eye for box office trends, Corman had noticed the success of Saturday Night Fever, Grease and Animal House. Why not, he thought, combine these into an anarchic teen musical comedy? Arkush got the job, but insisted that if Corman wanted anarchy, rock and roll would be a better fit than disco. Corman agreed but made two stipulations of his own: the film must feature naked gymnastics, and the school had to blow up at the end. 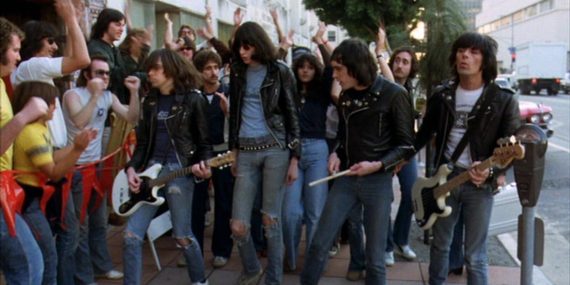 In the end, Corman got one of his wishes. The school blows up, but the gymnasts, when they appear, keep their clothes on. Arkush and Dante brainstormed everything they would want in a high school movie and produced an outline that was turned into a screenplay by Richard Whitley (not of Countdown fame), Russ Dvonch and McBride. There are two plots: one involving a high school schemer (Howard) coaching a boy (Vince Van Patten) and girl (Dey Young) in the art of dating; the other featuring a rock fan (Soles) clashing with the school Principal (Mary Woronov) over her love of rock music. Neither plot is taken seriously, used instead as the basis for a series of skits and jokes. Though the structure of the film resembles Animal House, the tone is much closer to the Zuckers’ Kentucky Fried Movie and later Airplane. It can’t match either of those films for quantity or quality of gags, but it is all performed and presented energetically. The focus on primarily female characters is also a welcome change from most of the male-focused comedies of the era.

And then there’s The Ramones. Somehow, the band was convinced to appear as Soles’ character’s favourite group. They perform several songs, including an extended concert section, and act as themselves in multiple scenes. In the musical sequences, Arkush really captures their immediacy and threatening oddity. At 6’6” Joey Ramone moves like an alien insect and the whole band seems barely capable of human communication. In a film that also features a man-sized laboratory mouse and a ticket ‘scalper’ in full Native American costume, they fit in perfectly. 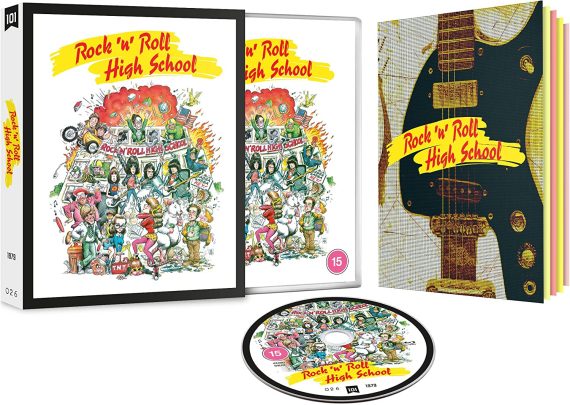 For such a low budget production, Rock N Roll High School looks pretty good on Blu-ray thanks to a new 4k scan. It’s bright and colourful, even if the detail can be a bit inconsistent. The sound is loud and clear. For this release, 101 Films have brought over the extras from the US Shout Factory disc, and they are impressive and extensive. There are four commentary tracks, bringing together in various combinations the director, writers and stars and even Corman himself makes an appearance, offering vague memories of the shoot alongside Dey Young. If you don’t have time to listen to all these, many of the highlights are also mentioned in the excellent 70-minute documentary Class of ’79: 40 Years of Rock ‘n’ Roll High School, which includes all the main players. It’s a first-rate introduction to how Corman operated in the 1970s, addressing both the limitations and freedoms he offered. In addition, several shorter documentaries are included from previous eras of home release (an interview between Corman and Leonard Maltin is entertainingly dated), and there is a decent assortment of trailers. The first 3000 copies also come with a limited edition booklet of essays and a slip-case.