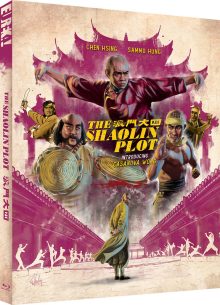 The Shaolin Plot (Si da men pai, literally, ‘The Four Sects’) is a film that is, surprisingly, not well known despite some strong credentials. It was directed and produced by Huang Feng who, in the same year, produced Sammo Hung’s directorial debut, The Iron-Fisted Monk. Huang was an important figure in Sammo’s career, meeting him not long after he first joined the Hong Kong film industry, encouraging the young man and offering practical support by getting him involved in many of his productions over a 6-year period. Sammo is even known to have said “I owe him everything.”

The Shaolin Plot sees Sammo not only get his first starring role for Golden Harvest but also a choreographer credit (though not his first). It was his last collaboration with Huang before moving on to directing his own work and more frequently taking starring roles, so it was somewhat of a turning point for the man who would become a kung-fu movie legend.

Keen to make the film better known, Eureka are releasing The Shaolin Plot on Blu-ray later this month. I can never resist a kung-fu movie re-release on the format, particularly one I’ve not seen before, so I got hold of a copy and my thoughts follow.

The film sees the villainous Manchu Prince Daglen (Chen Hsing) embark on a quest to collect the secret martial arts manuals of the four most renowned schools in China. None want to give them up without a fight of course but Daglen has cruel and devious ways to get what he wants.

After his father sacrifices his life to save his son’s, and the manuals fall into the hands of the enemy, Little Tiger (James Tien) plots to get revenge. He hides out with the exiled Shaolin monk Pu Hui (Chin Kang), who is blinded after fending off Daglen’s goons (headed by Sammo). Pu Hui trains Little Tiger in the arts of Shaolin, so that he may be strong enough to get his manuals back.

Meanwhile, Daglen plots to get the final manuals for his collection, those of the Shaolin Temple. The monks are numerous, disciplined and exceptionally well trained though, so Daglen can’t use his usual basic strong-arm tactics to get the manuals. Instead, he disguises himself as a disfigured deaf and mute monk to infiltrate the temple and secretly steal the treasured manuscripts.

When Little Tiger learns of this plot though, he endeavours to put an end to Daglen’s reign of terror.

I initially thought that The Shaolin Plot seemed to be Golden Harvest’s answer to Chang Cheh’s Shaw Brothers films, which were popular at the time, with the colourful period production design and heroic chivalry on display, with not a single woman in sight. However, after listening to the commentaries included on this disc and rethinking what I watched, there’s clearly more of a King Hu influence to the film.

For one, The Shaolin Plot included a lot of location shooting, whereas the Shaw Brothers tended to stick largely to studio production. There are still interior sets used, but Huang makes great use of a Korean temple(s) that add a grand authenticity to the visuals.

The spiritual side of the Shaolin is given more importance than usual too, again leaning towards the work of Hu, particularly A Touch of Zen and Hu’s regular composer Wu Ta Chiang even wrote the score to The Shaolin Plot. Frank Djeng on one of the commentaries included here, even believes a couple of the music cues towards the end are taken from Chiang’s work on A Touch of Zen.

Whilst Huang’s film never quite reaches the heights of the work of Hu, it’s still a lot classier than much of the Golden Harvest output of the time. I’m not wanting to badmouth the studio, who produced many of my very favourite martial arts movies, but they didn’t often pump as much money into their period pieces as the Shaw Brothers, so they often looked a bit rough-around-the-edges. The Shaolin Plot, on the other hand, puts every penny on screen, to make for a beautiful-looking film.

It’s also an unusual film in that it doesn’t have a clear central hero. Little Tiger could easily be called the central protagonist, but the film doesn’t purely focus on him and he doesn’t actually get the glory of fighting the final showdown himself. Instead, it’s more a case that he’s unleashed the power of the Shaolin to stop the villain. Though Tien may simply have got injured during shooting, causing him to get sidelined in the final scene.

The Shaolin Plot is a little on the long side for a kung-fu film of the era, but it manages to hold your attention through well-executed downtime. The story may be a fairly well-trodden one, but it’s handled very effectively and even shows maturity in examining the differences in politics and spiritual beliefs of the Shaolin and the Manchus (something Hu, again, was interested in). Don’t fret though, fight fans, there’s still plenty of action.

Speaking of which, Sammo does a great job conducting the numerous fight scenes. With Daglen taking on four different schools, it paves the way for a few different styles of fighting to keep things interesting (though the Shaolin Temple proves to be the prime focus). There are a variety of weapons too, though Sammo’s character’s killer cymbals are rather ridiculous, coming across like a low-rate flying guillotine.

With Sammo and his stunt team being behind the action, you can spot more than a few familiar faces that were yet to become household names, playing minor roles. These include Yuen Biao, Yuen Wah, Fung Hak-On, Mars, Mang Hoi and Lam Ching Ying.

All-in-all then, The Shaolin Plot is a handsomely mounted and action-packed old-school treat that shows its King Hu influences on its sleeve and showed the Shaw Brothers that Golden Harvest could deliver the period epic goods just as well as they could.

The Shaolin Plot is out on 20th June on Blu-Ray in the UK, released by Eureka as part of their Eureka Classics series. The film looks gorgeous, with pleasingly rich colours and a sharp, detailed picture. The audio is solid too, with fewer apparent issues than most Hong Kong films I’ve seen from the era.

Frank Djeng and Michael Worth provide yet another deeply illuminating commentary track. They have strong chemistry together, making it easy to listen to their well-researched treasure-trove of tidbits about the production. They have a lot of love for the film and help you better appreciate it.

Mike Leeder and Arne Venema’s commentary is great too, as always. On top of their typically loose style, with plenty of humour, they have some interesting things to say about the Shaolin, among other fascinating facts about everyone involved in the production.

In the booklet, James Oliver provides an informative essay on the film and the importance of the relationship between Sammo and Huang. It certainly helped me out a great deal in writing my review, so I’d thoroughly recommend you give it a read.

So, Eureka deliver a solid package for a martial arts film that deserves to be much better known. Fans of the genre owe it to themselves to pick it up.