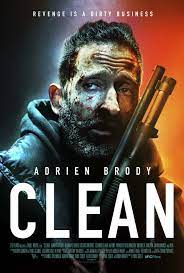 The action-revenge genre, thanks to the recent success of John Wick/Nobody/Wrath of Man, is as alive as ever. Clean is the newest addition and this may just be the safest example of one. Brody takes the lead as a trashman who is tormented by his violent and criminal past and is hell-bent on making amends. Haunted by personal tragedy he is determined to find redemption by helping those around him. He dedicates his life to his broken community and the safety of a young girl who reminds him of his daughter. When her life is put in danger, it reignites the darkness and brutality he has worked so hard to leave behind. In his attempts to save the girl, can he save himself and at what cost? First things first, it’s always nice to see an actor attempt to make some sort of comeback with a more dramatic, hard-boiled role. This is what Brody attempts to do here, and he may just be the best part of a film that unfortunately succumbs to the worst pitfalls of the revenge genre. He plays a rough-edged trashman, named Clean (yes), who has left his traumatic past of violence and drugs behind. But, uh-oh, there’s a bad guy in town played by Glenn Flesher whose nasty drug pedalling business is causing death and destruction, which unsurprisingly envokes a reaction from Clean, causing him to go back to his violent old ways. Sounds familiar? Yes, because you have seen this film countless times before; only better. It tries to be dramatic and intense but simply put, there is just very little to care about. For a film about a trashman named Clean, whose weapon of choice to dispense justice is a hammer, this really should have been more entertaining than it is. The script is far too serious, leaving no room for fun but far too much room for a stone-faced serious atmosphere that just does not work at all. Even the action, while brief, is underwhelming due to the poorly executed quick-cut editing. There is no thud, no real impact to the violence on display, which is shocking considering our protagonist is literally using hammers and wrenches to crack skulls open. Orchestrated carnage can be one of the most cinematically satisfying things to put on screen, but alas, here it is just a disappointment.  Brody does his best with what little he has to work with outside of cliche after cliche character building, but no moment dwells long enough to leave any long-lasting emotional impact.

The same cannot be said for the film’s main villain, a small-town drug king played by Glenn Flescher. His performance here is hilariously over the top, ticking all the boxes of every gangster caricature known to man. As said above, the film’s one-toned attitude is far too stale and serious for a character that is so cartoonish in nature and it just does not fit at all. Clean is a film that beat for beat, line for line, generically copies and pastes the formula for every other revenge story which wouldn’t be too much of an issue if this film wasn’t so downright bland and safe.

Clean will be released digitally on the 4th of July.